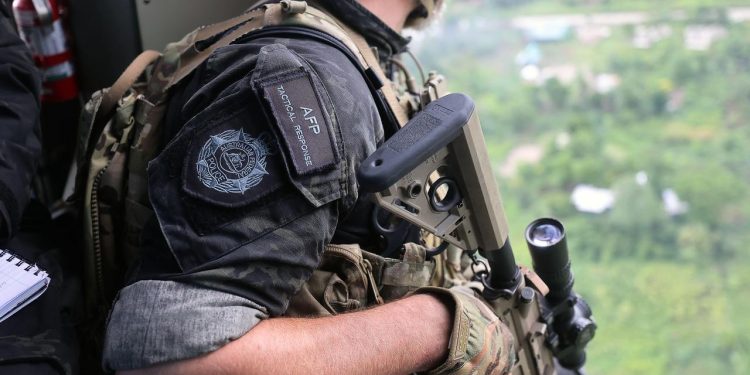 Australia must take drastic action to stop a Chinese naval base in the Solomon Islands, according to one commentator who says this is our “Cuban missile crisis”.

Australia must be willing to invade the Solomon Islands and topple its government if that’s what is necessary to stop a proposed security pact between China and the Pacific nation going ahead, one commentator has argued.

David Llewellyn-Smith, founding publisher of MacroBusiness and former owner of leading Asia Pacific foreign affairs journal The Diplomat, says this is “Australia’s Cuban missile crisis” and chillingly warns a Chinese naval base in the Solomons would be “the effective end of our sovereignty and democracy”.

In the 1962 crisis, the world came to the brink of Armageddon when the Soviet Union deployed nuclear missiles to Cuba on America’s southern doorstep.

Prompting the warning is a leaked draft “framework agreement” between China and the Solomon Islands, which surfaced online on Thursday.

Under the agreement, which has sent shockwaves through Canberra, China would gain a port for its navy less than 2000 kilometres from Australia’s shoreline.

“China will have parked an enormous stationary aircraft carrier within direct striking distance of every eastern Australian city,” Llewellyn-Smith wrote in a provocative piece on Friday.

“There is no way that Australia can allow this deal to proceed. If it must, the nation should invade and capture Guadalcanal such that we engineer regime change in Honiara. There are other soft power levers to pull first and we should pull them forcefully. But we should also immediately begin amassing an amphibious invasion force to add pressure.”

He added that this was the “14 conditions to end Australian democracy, weaponised”.

In 2020, Beijing released a list of 14 grievances that it claimed were “poisoning bilateral relations” with Australia – among them the decision to ban Huawei from the rollout of the 5G network, foreign interference laws, and calling for an inquiry into the origins of Covid-19.

“Any time that Beijing disagrees with Canberra, it will open the hatches on its Solomon-based cruise missiles and ask us to reconsider,” Llewellyn-Smith wrote.

“This will include no disagreement with Beijing over key features of the silent invasion like a cowed media, as well increased migration and bribery without accountability, eventually capturing enough federal seats that Beijing controls elections.”

Speaking to news.com.au, Llewellyn-Smith said he “meant every word”.

“If we don’t respond to this – it has to be us and Washington – then mate, it’s game over,” he said.

“China will have freedom of the seas with its navy throughout the South Pacific. Gunboat diplomacy will be our new reality. They will literally have cruise missile boats sitting there, they might have hypersonic missiles that can reach Brisbane in – how long, 15 minutes? I don’t know, but it won’t be very long. That just completely changes your political relationship with China. Are we going to defend ourselves with our nuclear subs in 50 years?”

He said the Solomons base “has to be a red line China is not allowed to cross” and Australia must “throw everything at this”, including stopping iron ore exports if the deal goes ahead.

“You’ve got to put everything into drawing that line, no matter what it takes,” he said. “Canberra and Washington simply have to throw the politics out and just say, ‘No, this is not happening.’ I’m not a warmonger but this is end-of-the-world stuff, this is crazy.”

He argued that while the world has been distracted by Russia’s invasion of Ukraine and keeping a wary eye on a possible Chinese invasion of Taiwan, China has “just sort of leapfrogged Taiwan”.

“The danger of them taking Taiwan was that it would begin this island-jumping,” he said. “They’ve just leapfrogged the whole lot. It’s incredibly bold. It’s a huge thumb in the eye.”

Security experts had already sounded the alarm this week that Australia was defenceless against Chinese ballistic missiles fired from artificial island bases in the South China Sea, some 3500 kilometres away.

“The DF-26 missile is capable of reaching targets about 5000 kilometres away,” Dr Malcolm Davis from the Australian Strategic Policy Institute (ASPI) told The Daily Mail.

“So that could certainly cover everything in northern Australia down to Pine Gap near Alice Springs where a CIA-run American-Australian intelligence base is located.”

ASPI director of defence, strategy and national security Michael Shoebridge said the draft agreement “may well be some kind of ambit claim from Beijing”.

“But not taking it as a statement of intent would be plain dumb, because it is consistent with Communist Party goals and directions, if not in the Solomons then somewhere else in the South Pacific,” he told news.com.au on Friday.

“So clear-eyed analysis and engagement instead of hysteria is the right way to behave here.”

Mr Shoebridge said while it was understandable for South Pacific nations to welcome economic and even political competition brought by China, the draft agreement “brings something very different – military competition”, into the region.

“And it is not in the interests of South Pacific populations to have the South Pacific become a place of actual military competition, tension and conflict,” he said.

“Even if some leaders don’t want to act on this fact, other voices have to be listened to and noticed. Every member state of the Pacific Island Forum has its direct security tied to this decision and I have no doubt they understand at least as well as Canberra does. Within the Solomon Islands, no doubt inside the current government itself, there will be strong voices against the agreement as drafted – or any agreement involving Chinese paramilitary or military presence in the Solomons.”

He said Australia’s job was to “speak frankly” and “show we are part of the Pacific family and that we are as deeply against our region becoming a place of actual military tension as any other of our Pacific partners”.

“We don’t want the stand off between the PLA Navy ship that used military grade lasers against an Australian Air Force P-8 aircraft just a few weeks ago to be the type of frequent military tensions in the South Pacific that would be enabled by PLA routine presence operating out of the Solomon Islands,” he said.

“The single biggest factor that can either bring this nasty reality into being or prevent it is whether the Chinese military is given permission by any government in our region to establish places to base or operate from. Any government that helps create this dystopian, dangerous future will be doing its own people and the region enormous damage.”

Speaking on Nine’s Today show on Friday, Defence Minister Peter Dutton denied the Morrison Government had “dropped the ball” in the Pacific.

“If you look at the amount of support that we have provided into the Pacific, the work we’ve done in Tonga, the work we continue to do in PNG and every other nation – I’m meeting with my New Zealand counterpart this afternoon – it’s a standing agenda item for all of us to be able to realistic about China’s footprint, their exertion, their pressure and the way in which they conduct their business.”

Mr Dutton said he didn’t believe China’s ambitions in the Pacific were “consistent with the values that we share with the Solomon Islands and with Tonga, and other countries”.

“There’s aid … and many ways we’ll work very closely together,” he said.

He noted Australia had 50 people on the ground in the Solomons who would stay there in the run-up to 2023.

“There’s a lot more we can do for them,” Mr Dutton said. “As part of the Pacific family, it is obvious we want to work together and we want to resolve any issues within that family, within our region. And we would be concerned clearly about any military base being established and we would express that to the Solomon Islands’ government.”

But Llewellyn-Smith said Mr Dutton’s comments were “entirely beside the point”.

“He’s talking about yesterday, not today,” he said.

“This is no longer a soft power competition, this is hard power, strategic competition. It’s all well and good to try to bribe the Pacific Islands to keep them within our sphere of influence – China’s doing the same, that’s harmless enough. But this is a massive step to hard power force projection on the Australian coast.”

“This would be a very significant and negative development for Australia’s geopolitical interests in our region,” the shadow minister for climate change and energy said. “It would frankly represent a failure of the Pacific step up if these reports were true – we should be the partner of choice on all matters that would be in our view the regions best interest.”

Earlier, the Department of Foreign Affairs and Trade said Australia “would be concerned by any actions that destabilise the security of our region”.

“Pacific Island nations have the right to make sovereign decisions,” a spokeswoman said in a statement. “Australia’s co-operation with our Pacific family is focused on the economic prosperity, security and development of our region. This co-operation is always transparent and open, and aligned to the priorities and interests of our Pacific partners.”

The United States and Australia have long been concerned about the potential for China to build a naval base in the South Pacific, allowing its navy to project power far beyond its borders.

It would allow armed Chinese police and the military to deploy at the Solomon Islands’ request, to maintain “social order”. The “forces of China” would also be allowed to protect “the safety of Chinese personnel” and “major projects in the Solomon Islands”.

ANU National Security College head Rory Medcalf said that, assuming the document was accurate, “this is a very serious shift”.

The deal would in some respects echo a similar agreement the Solomon Islands already has with Australia.

Karen Galokale, permanent secretary for the Ministry of Police, National Security and Correctional Services in the Solomon Islands, told Reuters on Thursday that a co-operation agreement signed between the Solomon Islands and China covered policing, and confirmed a wider agreement was being discussed.

“Any other arrangement on broad security would be just the same as the Australian agreement,” she said. “It will have to go to Cabinet.”

The nation of 800,000 has been wracked by political and social unrest, and many of its people live in poverty.

In November, protesters tried to storm the parliament and then went on a deadly three-day rampage, torching much of Honiara’s Chinatown.

The latest unrest was sparked by opposition to Mr Sogavare’s rule and fuelled by unemployment and inter-island rivalries.

But anti-China sentiment also played a role. Leaders on the most populous island of Malaita fiercely oppose Mr Sogavare’s decision to recognise Beijing and break ties with Taiwan in 2019.

“The agreement will likely be viewed in Malaita with suspicion and deep concern in the current climate of unease,” Dr Powles said.

Following the 2021 riots the United States announced it was reopening its embassy in Honiara, which had been closed in 1993.

China has since deployed police to train local forces, donated riot equipment and late on Thursday the Solomon Islands announced the signing of a memorandum of understanding on police co-operation with Beijing.

Australia previously led a peacekeeping mission in the Solomons from 2003 to 2017.

Sunak struggles to pay for can of Coke in service station