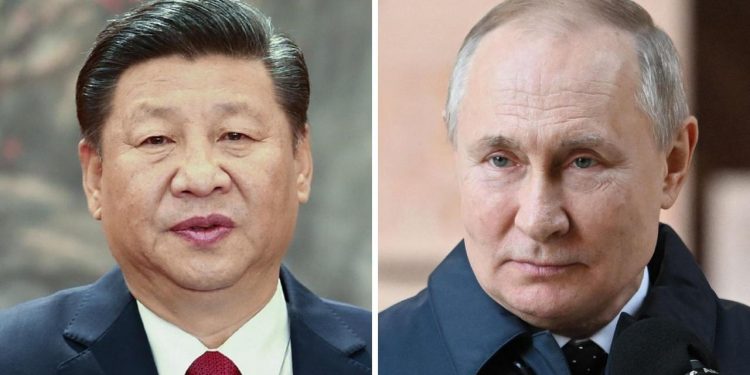 There are subtle hints that Xi Jinping is thawing on his “no limits” friendship with Vladimir Putin as the war rolls on.

They are autocrats. They are trade partners. They are nuclear powers. They are neighbours. But President Putin’s bungled invasion of Ukraine is quickly becoming a crisis for Chairman Xi.

It’s been the focus of considerable speculation since the pair declared their “no limits” friendship during the Beijing Winter Games lead-up.

Chairman Xi either knew and did nothing, or he was duped. Either way, Beijing’s apparent strategy has been to play both sides.

China won’t support the sanctions imposed for doing so.

Instead, Beijing’s state-controlled media simply ramped up its well-established narrative. Russia was a victim. President Putin was a hero. NATO and the West were the imperialist villains.

But that’s beginning to change.

Chairman Xi has been remarkably silent on the Ukraine invasion.

His Communist Party officials appear to be scrambling to anticipate his opinions.

And Washington is piling on the pressure.

Last week it leaked an intelligence report detailing a plea from Russia for Chinese military equipment. Its losses on the Ukrainian front had been unexpectedly high.

Both Beijing and Moscow have dismissed the report as “disinformation”.

Now international analysts are sifting through what hints they can find to guess at the future of the “authoritarian arc”.

“Regardless of whether Beijing had advance warning of Russia’s invasion of Ukraine, Chinese leader Xi Jinping’s decision to issue a statement last month outlining a “no limits” partnership with Moscow was arguably the single biggest foreign policy blunder of his nearly ten years in power,” states Centre for Strategic and International Studies (CSIS) China analyst Jude Blanchette.

It didn’t end there.

On February 25, the day of the invasion, Russia’s embassy in Beijing released a statement claiming “Xi Jinping stressed he respects the actions taken by the Russian leader during the current crisis.”

“Xi and Putin also “reaffirmed their willingness to further closely coordinate and support each other in the United Nations and other multilateral platforms,” it added.

Chairman Xi has since maintained a low profile.

But he has been supporting the idea of peace talks in his conversations with foreign heads of state. And his Communist Party commissars have begun showing a measure of sympathy for Ukraine. At least for foreign audiences.

“On Ukraine, indeed the current situation there is grave, and China is deeply concerned and grieved,” Premier Li Keqiang said Saturday. “The pressing task now is preventing tensions from escalating or even getting out of control.”

He didn’t criticise the invasion. He did complain about sanctions. He insisted China-Russian relations were “rock solid”.

But, just days later, another contradictory signal was broadcast.

“We will respect the path chosen by Ukrainians because this is the sovereign right of every nation,” the Chinese ambassador to Ukraine said Tuesday. “China will never attack Ukraine. We will help, in particular in the economic direction.”

Any suggestion Chairman Xi knew what was coming remains a sensitive subject.

Earlier this week, China’s ambassador to Washington declared “assertions that China knew about, acquiesced to or tacitly supported this war are purely disinformation”.

Any conflict between Russia and Ukraine was of no benefit to China, Qin Gang added. “Had China known about the imminent crisis, we would have tried our best to prevent it.”

Then, in February, a Communist Party order instructing Chinese media outlets not to report anything “unfavourable to Russia” was accidentally published.

“Under these general guidelines, each media outlet censors itself to avoid official trouble,” she says.

It also means the Party-controlled newsrooms are struggling to anticipate their leaderships’ desires.

“The (Chinese Ministry of Foreign Affairs) is increasingly scrambling to interpret signals coming down from Xi’s office, as evidenced by its frequently shifting day-to-day talking points on the Ukrainian crisis,” says CSIS chair in China studies Mr Blanchette.

Beijing backs Moscow’s demand that Ukraine should not be allowed to join the NATO alliance.

It insists Russia’s “security concerns” about Ukraine are “legitimate”.

It repeatedly pronounces NATO should abandon its “Cold War” attitude – while pointedly avoiding any reference to Moscow’s attack on a neighbouring country.

It abstained from a UN General Assembly vote condemning the invasion.

But Communist Party officials appear to be toeing the neutrality line.

“China does not want to see the situation in Ukraine to become what it is today,” Foreign Ministry spokesman Zhao Lijian insisted Tuesday.

Then, on Friday, China refused to back a UN vote proposed by Moscow. The resolution was abandoned.

Much of China’s military equipment is based on Russian technology. But its industrial base is far stronger, enabling it to build more quicker than Russia can itself.

President Joe Biden this week warned he wouldn’t hesitate to rally sanctions against China if it actively moved to support Russia’s floundering invasion.

“If China were to decide to be an economic provider (to Moscow) … they only make up 15 to 20 per cent of the world’s economy,” White House spokesperson Jen Psaki said Monday. “The G7 countries make up more than 50 per cent. So, there is a range of tools at our disposal in coordination with our European partners should we need to use them.”

Washington says Beijing has “responded” to Moscow’s financial and military support appeal. It didn’t indicate what that response was.

And Beijing has not categorically denied such assistance would be supplied.

But there are hints of hesitancy.

“Without getting into details, I’m aware of instances in the last few weeks when China said no to Russian requests, and I would hope that continues,” US House Foreign Affairs Committee member Representative Tom Malinowski said. “The administration has been pretty clear that we would not hesitate to sanction Chinese entities that attempt to undermine the sanctions we have imposed on Russia.”

He’s paranoid. He’s surrounded himself with loyal supporters. He’s at risk of believing his own propaganda.

“It is becoming clear from his speeches and articles that Xi’s outlook on China’s security environment in the coming decade is increasingly pessimistic,” warns Mr Blanchette.

“This diagnosis arguably led Xi to draw closer to Putin and Moscow in the months leading up to their meeting in February and is why he will not abandon Russia moving forward.”