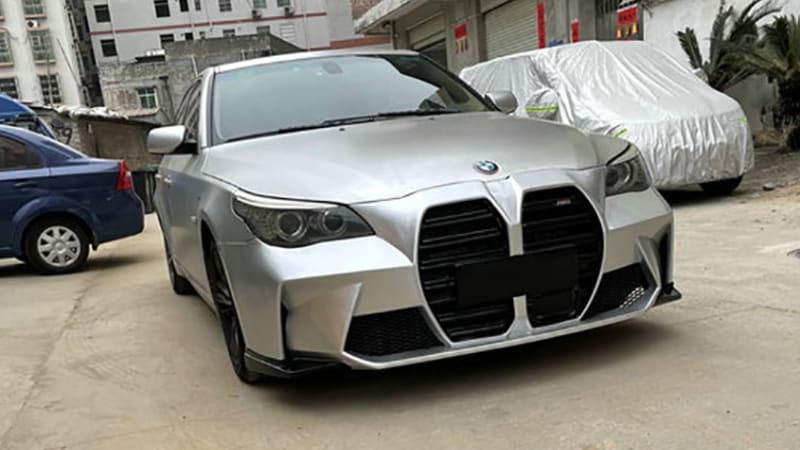 A Chinese company is offering a body kit for the E60 BMW 5 Series (2004-2010) that it’s literally dubbing the “M3 Big Mouth Front Bumper.” It’s inspired by exactly what the name suggests and includes an M5 emblem. It is available on the general shopping website Taobao.com.

Different cultures have different common aesthetic tastes. It’s the reason the Forbidden City looks different than Hampton Court, or that people in Beijing dress different than those in Bolivia. It’s part of the glorious diversity that makes humanity special. It should therefore not be surprising that people might think a car is gorgeous in one market and ghastly in another. In fact, it’s actually surprising there’s as much aesthetic commonality between markets as there is.

As such, adding that “Big Mouth Front Bumper” to the E60 5 Series actually improves the thing. Come to think of it, the E60 was always weird. It was arguably a more radical design departure from its E39 predecessor than today’s M4 is from its predecessor.

In the end, lighten up Francis, this isn’t for you and that’s OK.

The majority of humans, regardless of common cultural aesthetic tastes, thinks the “M3 Big Mouth Front Bumper” is hideous and this company should be ashamed for making the E60 look even more ridiculous. Furthermore, demand Taobao remove it immediately in order to spare humanity’s eyes from the thing.

My father is almost 90 - is he too old to invest in shares?

Mark and Lloyd Reuss on EV1 and its Impact

My father is almost 90 - is he too old to invest in shares?