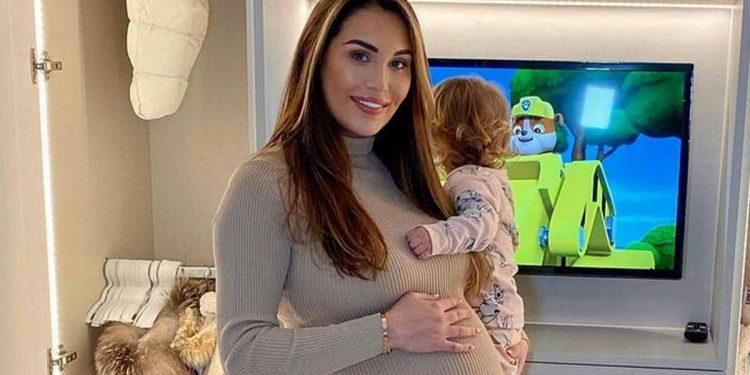 
Chloe Goodman has spoken about the moment she welcomed her second child, a baby boy called Hudson, in February with fiancé Grant Hall after a ‘complicated’ labour.

The Ex On The Beach star, 28, revealed how doctors had warned her she was risking her life as she carried her son to 35 weeks- despite being in and out of hospital with excruciating pain and complications.

Detailing her birth story, Chloe, who is proud mum to daughter Isla, 18 months, detailed her worries over how she hadn’t made a will as she went into hospital to have a caesarean section.

The television personality’s pregnancy was high-risk and faced with difficulty as four years ago she had to have half a cervix removed after doctors discovered she had high grade three abnormal cells during a routine smear test.

And Chloe said she was “bleeding out” while she was on the operating table after doctors tried to remove a cervical stitch which had been placed there to prevent preterm birth.

She told OK! Magazine : “It is scary, looking back, my uterus wasn’t reacting, they had to give me a couple of drugs as it wasn’t shrinking like it was meant to. On the second drug, it started to contract back.

“But then I started to lose a little bit too much blood. I found out I was anaemic, which I didn’t know until they told me when I was on the operating table – which is always fun when you’re bleeding out.”

Chloe candidly detailed she was worried she would die while trying to give birth to her baby boy.

“Me and Grant were meant to do our wills ages ago, when I was in the hospital I realised if it all went wrong, I have to make sure he gets my money, Grant’s already got stuff in place.”

And Chloe said she “couldn’t stop crying” with happiness at welcoming Hudson after carrying him for 35 weeks, as she described how the pain was “agonising” during her pregnancy.

For her second pregnancy, doctors had discovered there wasn’t enough of her cervix remaining so had to stitch her womb and bladder together instead, creating painful side effects.

Chloe previously talked to Closer Magazine about her complicated pregnancy back in January.

She said: “It took nine weeks to discover what had happened with my bladder. I was wetting myself, I was wearing adult nappies and I had no urge to wee. I was in excruciating pain too and in and out of hospital.

“Doctors wanted to remove the stitch, but I was adamant that I couldn’t put the baby at risk, and refused. I have been really closely monitored since. The incontinence stopped but the pain is still pretty bad.”

Chloe also told how she was taking medicine and antibiotics to treat her current condition and how she had no choice but to have a Caesarean section as a natural birth could jeopardise her own health.

She has also been warned by doctors that she may need to use a catheter bag for the rest of her life as her bladder could end up being severely damaged.

She added “They have to put the stitch higher up than it was with Isla because of the scar tissue and I don’t have much of my cervix left anyway, so I’ve been told I won’t be able to carry again after this pregnancy. This will be our last child.”