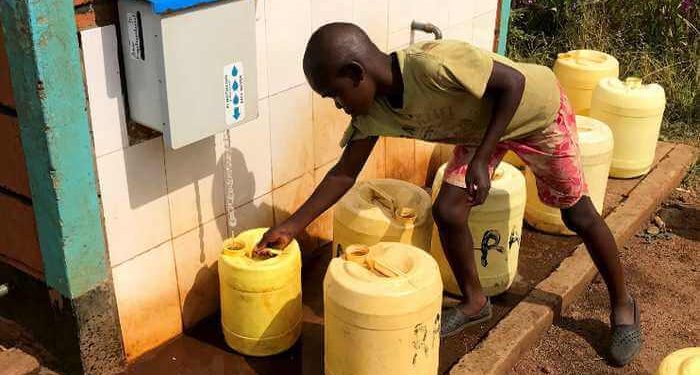 
More than 2,000 children die every day around the world simply because they lack clean drinking water, according to the U.S. Centers for Disease Control.

Engineers, including those at Tufts, have devised simple, low-cost ways to purify drinking water in low-income countries using chlorine, but a common concern is that adding chlorine to water could harm the beneficial bacteria in children’s developing gut microbiomes, which play an important role in keeping health intact.

Now a team of scientists led by Tufts, the University of California at Berkeley, the International Centre for Diarrheal Disease Research, Bangladesh, and Eawag in Switzerland have found that using chlorine to treat drinking water in Dhaka, Bangladesh does not disrupt the normal population of bacteria in the digestive tract of children, in addition to reducing diarrhea and antibiotic use.

The children’s microbiomes—tested from stool samples collected one year after the dispensers were installed —had a similar diversity and abundance of bacteria as children who didn’t receive chlorinated water. Some slight differences were observed, including the enrichment of beneficial bugs and increases in the presence of some antibiotic resistance genes, but those changes were small and the overall make-up of their microbiomes was similar.

While chlorine inactivates microorganisms present in water during storage, transport, and delivery through the tap, this study suggests that it’s not killing the good bacteria after the chlorinated water is consumed. In fact, by keeping the bad bugs out of the water supply, chlorination is allowing kids’ microbiomes to thrive and do their good work maintaining health.

That’s very important especially in the first few years of life. The gut microbiome of infants is seeded at birth, then grows and stabilizes to its adult-like state by the time a child is about three years old.  The progressive colonization by different bacteria in the microbiome may be important to several developmental milestones related to metabolism and weight maintenance, allergy development, disease susceptibility, and even mental health.

“No doubt further studies may be helpful for understanding all the long-term health effects of drinking chlorinated water,” said Maya Nadimpalli, research assistant professor in civil and environmental engineering at Tufts, “but this study makes it clear that the microbiome is protected after at least one year of exposure, so that the benefits of water chlorination—which can save hundreds of thousands of lives each year—continue to outweigh diminishing concerns about its safety.”

Amy Pickering, formerly of Tufts and now Blum Center Distinguished Chair in Global Poverty and Practice at the University of California, Berkeley, has been working on developing and field testing automated chlorination devices that are compatible with water infrastructure in Africa and Asia.

Nadimpalli, whose research is conducted in collaboration with the Stuart B. Levy Center for Integrated Management of Antimicrobial Resistance at Tufts, notes that since children in Bangladesh are frequently exposed to pathogens, they are also treated with antibiotics at a rate five times higher than children in the U.S.

“The treatments themselves have a harmful effect on diversity in the gut microbiome, and you end up with worse health outcomes and potentially more antibiotic-resistant pathogens,” she said. “So chlorination can help reduce incidence of disease, limit use of antibiotics, and still keep microbiomes healthy.”

Only 9% of Americans can properly read a nutrition label