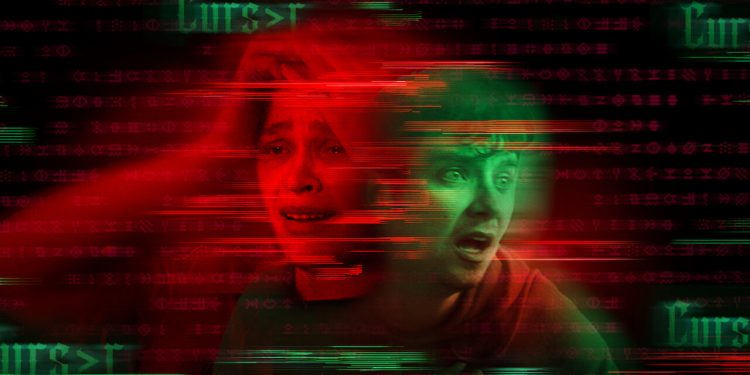 
From what we can tell Hal is a pretty unpleasant guy, and not only because he exerts such terrifying power over his family. He even starts a bigoted rant against Kayla, bemoaning that guys like him (white, wealthy) aren’t allowed to be the hero anymore, and that Kayla being coded as the hero isn’t fair.

Remember that Red Dwarf inspiration we mentioned above? Fans of the classic British sitcom will be feeling it pretty heavily during Kayla’s boss battle against Hal, where every violent act they throw at each other is only dealt out to themselves. This was also a delightfully flipped scenario in the classic Red Dwarf episode “Justice”.

Hal’s wife takes the opportunity to try and end his reign of terror over the family by shooting Kayla, but it’s not enough, and Hal toys with Kayla by slicing his face before slitting his own throat. However, Kayla doesn’t die from the wound, and she drowns herself in Hal’s pool while her throat is bleeding, effectively drowning Hal instead. It’s game over for Hal: he’s dead, and Kayla is a “worthy” player. She has completed CURS>R.

Kayla uses her coding knowledge and the information from Beck’s CURS>R beta test video tape to harness the curse symbols for herself. She is able to force drug dealer Lance (Ryan Gage) to kill himself with needles in the apartment complex by manipulating reality, much like a really messed up version of Neo in The Matrix. Kayla now has the power to bend reality to her will using the curse code symbols. After Lance is dispatched, Kayla justifies the killing by saying that sacrificing Lance saved her mother from his influence, and chillingly echoes Beck’s affirmation that the curse can be a gift.

As the movie ends Kayla gets a call from an older Beck, who it turns out is still a computer developer, and is now working at Kismet, the company that has until recently been employing Kayla as a cleaner. It really doesn’t seem like an accident that “kismet” means “fate”, does it? “You’ve suffered, I’ve prospered,” he tells her. “Yet somehow you managed to beat my game.”

“Who will suffer next?” Beck asks Kayla, and she responds with a pretty ice cold “Only people who deserve it.” Kayla now seemingly intends to use the curse to kill bad guys like Lance by utlilizing its retro tech and symbol command prompts to work through cell phones. Problematic, but okay! Now, Beck, about that money you promised…