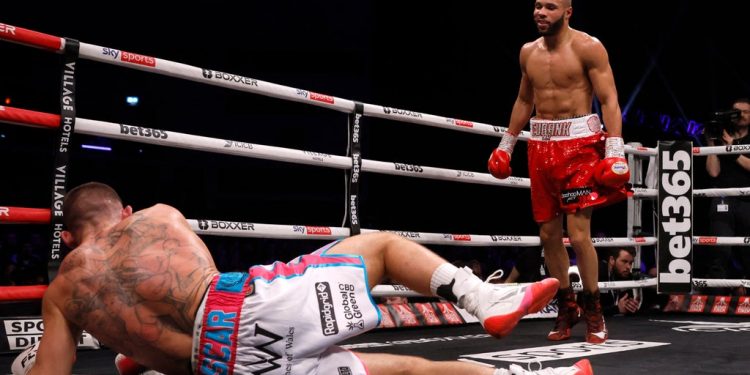 Chris Eubank Jr produced a devastating performance in Cardiff to not only shatter the heart and hostility of Liam Williams but further dissolve the shadow he’s fought under his entire life. The 32-year-old will always be inextricable from the rich legacy of his surname, and his relentless showboating did much to evoke those memories, but this was a defiant performance worthy of merit in its own right.

Such had been Eubank’s dominance, it felt remarkable that the contest endured the course of 12 courageous, gruelling, and often gory rounds. He had dropped Williams in three of the first four rounds, his spiteful and snappier counters too slick for the Welshman to preempt, and from thereon the outcome had long felt inevitable.

After two defining defeats, against Billy Joe Saunders and George Groves, and over a decade’s scar tissue in the sport, this victory might not have been Eubank’s greatest, but it was perhaps the most important. It will propel him towards another world title shot, most optimistically against the imperious but ageing Gennady Golovkin, and while that will be the real litmus test of this final act, even his greatest cynics must concede that Eubank delivered here on all his bluster.

After all, to claim he had entered the lion’s den in Cardiff would be a gross understatement. The raucous crowd, crammed inside the small area, established a wall of sound that might have crippled a fighter of lesser confidence. In typical fashion, though, Eubank rolled the weight off his shoulders, though the tension remained in a nervous opening round. Williams took the front foot and was initially sharp and measured with his punches, but Eubank then landed a stiff jab that stunned the crowd and dropped Williams to the canvas. If it seemed innocuous, Eubank followed it up with menace, attempting to pin Williams up against the ropes and unload fierce combinations.

Williams wrestled his way to the bell but could do little to withstand the tide coming in his direction. Eubank’s reflexes were sharper and the snap behind his shots heavy, honed under the tutelage of Roy Jones Jr on a rural Florida farm during the pandemic, and a straight right hand through Williams’ guard left the Welshman sprawled against the canvas in the second round. In the corner, Jones turned to the crowd, laughed and raised his hands as if it were all too easy.

Perhaps, it was. Eubank began showboating in the third, shuffling his shoulders as Williams rallied and mounted a sustained charge. Shots were landing intermittently but, whenever Williams opened up, Eubank was coiled and snarling with intent. As the bell rang and Williams dropped his guard, Eubank winged in a nasty hook that reignited the fury of a crowd who were rapidly being robbed of belief.

The next clean shot that landed didn’t need to carry the same force. Instead, it was another pinpoint counter-jab that deprived Williams of his balance, in a near replica of the opening round. Williams once again hauled himself to his feet, clawing at the ropes for leverage, and any hope that remained had by then been reduced to a thread.

Had Eubank not been so determined to goad the crowd and extend Williams’ suffering, the night might have ended far earlier. As it happened, the sort of antics Eubank has inherited from his father offered Williams the chance to regain his composure. He weathered the storm in the fifth and followed it with his best round of the fight in the sixth, dragging Eubank into a scrappier contest, smothering the space that had provided such deadly counters.

Williams became increasingly dirty as the fight wore on, resorting to every trick of the trade in an effort to aggravate or injure Eubank. It had always been his best route to victory and, although that path had long disappeared, Williams did begin to find success. Every right hand that landed was greeted with an almighty roar from the crowd and a dismissive shake of the head from Eubank. His counters, though, were less precise and more infrequent, and in the ninth, there was no such posturing when his head was rocked by a piston-like Williams right.

The crowd roared Williams into the championship rounds, their fighter by now habitually incurring warnings from the referee but somehow eluding being docked a point. But when he was knocked down for the fourth time, not so much by a single punch but a wave of momentum, his trainer Adam Booth lingered on the apron and considered throwing in the towel.

In the end, he afforded his man the dignity of seeing the final bell, as the judges’ delivered scorecards of 116-109, 116-108, 117-109. Williams deserved that much, having accounted for the disparity in skill with uncompromising courage. But ultimately it was a humbling night for him. For Eubank, who sprung onto the ropes and soaked in a rain of beer hurled from the crowd, there was to be no such deference.

Series sets new record for Korea on US Netflix