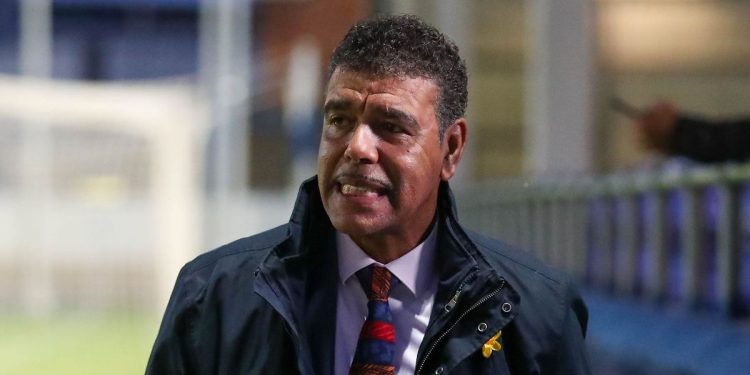 
Sky Sports pundit Chris Kamara, who has opened up on having apraxia of speech, was told by wife Anne ‘something is not quite right’ after an appearance on The One Show

Chris Kamara has revealed he has been suffering from apraxia of speech after messages from worried fans – and his wife noticed another issue in a very similar way.

The Sky Sports pundit opened up on his speech disorder after a number of concerned viewers noticed his speech was “slurred” while he was covering a League One match between Rotherham United and Shrewsbury Town on Saturday afternoon.

Kammy vowed to “beat” the condition, which impacts speaking as it affects the process of sending messages from the brain to the mouth in order to form intended words.

The much-loved former footballer has now confirmed he will temporarily step away from his role reporting on matches for Soccer Saturday so that he can focus on his health.

This comes almost a year after Kammy revealed he was undergoing a brain scan and blood tests after suffering from what he described as ‘brain fog’.

He was prompted to visit a doctor after his wife, Anne, spotted signs of an issue during an appearance on The One Show.

Kammy went to get a brain scan last year
(

Get the news you want straight to your inbox. Sign up for a Mirror newsletter here .

“I was on with Alex Jones and Michael Ball, I did the menu for the show live and not a problem,” said Chris in April last year.

“Michael Ball talked to me about the Christmas album and said ‘name some of the songs’ and my mind had gone completely blank and I couldn’t think of anything.

“That was the first time my wife said to me, ‘there’s something not quite right, you need to get it checked out’.”

The 64-year-old was initially concerned he may be showing signs of dementia after Match of the Day host Gary Lineker spoke about footballers being more a risk due to heading balls.

Kammy decided to book a scan after speaking to Anne, who he married in 1982and is mother to their sons, Ben and Jack.

Speaking on Steph’s Packed Lunch in March 2021, he said: “I’m going for a scan next Monday… we talked about it [dementia] on the programme.

“I went home and she [wife Anne] said: ‘You’re all blasé? You think you’ve had a fabulous career, if it all ended tomorrow, that would be fine. What about the grandkids, what about me? Get checked, there might be something you can do’.”

Chris Kamara attending the Pride of Sport Awards in 2019
(

Kammy (with Lorraine Kelly) is a much-loved football pundit

Research has found professional players are 3.5 times more likely to get dementia than the average person and Lineker called for heading to be banned in training at all levels.

Chris continued: “It’s a precaution. It’s not part of the ageing process, like other people [when] you start to lose your memory. You think I’m getting old.

“You’re there but you’re not there if you get dementia, which is horrible.”

When Steph asked Kammy whether he was worried about having the scan, he replied: “No. I’ve had a great life.”

There were encouraging results for Chris a month later when he revealed the results of his scan – and said they found “no loss of brain mass and very few lesions”.

Kamara said he had further checks due to his “brain fog” symptoms and confirmed they could be explained by his underactive thyroid, which was causing him to slur his words.

He explained: “After the blood test I had, I’ve got an underactive thyroid. I’m suffering with a swollen tongue which causes you to slur your words, slows down, not your thoughts because the thoughts are there, but transferring those thoughts to the mouth to get you to talk coherently.

Chris has got the support of his wife and kids
(

In August last year, Kammy admitted he would have no regrets about playing as a footballer if the brain scan had revealed he had dementia.

Chris said: “If that scan had showed I had dementia, would I have changed anything in my life? The answer is no. I’ve had a great life.”

“I’m sure if I said to any of those players who are playing today, knowing the consequences down the line, would you stop your career now? I bet 99.9% would say no.”

But he did open up about the daily struggle he has with his underactive thyroid, which he is on tablets for.

“Some weeks I just feel great,” he said. “Then the next day I’m tired and listless.”

The broadcaster provided more details of his health battle this weekend after concerned fans messaged about his ‘slurred speech’.

“Just wanted to let a few of you know who tweeted me today that I am ok ish,” Kamara tweeted. “Alongside my Thyroid problem I have developed Apraxia of Speech & have been working to get my speech back to normal.

“Some days it can be a little slow and some days it’s normal. Hopefully I can beat this!”

Kammy will be taking a break from reporting on matches
(

Chris was flooded with love and support from a number of fellow presenters, pundits and former pros.

Sky Sports presenter David Jones said Kammy was a “hero” to him and sent his love, while fellow host Kelly Cates added: “You’ve got this Kammy”.

A number of players past and present sent their wishes, including Liverpool legend Jamie Carragher and former Leeds United and Sunderland manager Peter Reid, who said “Love you top man. You will get there”.

Former referee Mark Halsey, who famously beat a cancer diagnosis to return to Premier League officiating, also showed Kamara his support by writing. “Not hopefully YOU will beat this pal, be strong stay positive.”

On Monday, Kammy confirmed he will temporarily step away from his role reporting from stadiums up and down the country to focus on his recovery.

In a tweet explaining his decision he wrote: “Thank you so much to everyone for your best wishes. Twitter can be a wonderful platform.

“The response about my Apraxia has been overwhelming. Unfortunately for you viewers this is not the end of me but ‘Live TV’ might have to take a back seat at the moment. Thank you.”

French Fries Vs. Almonds Every Day for a Month: What Changes?

French Fries Vs. Almonds Every Day for a Month: What Changes?