Chris Rock is as stunned as you are about the slap 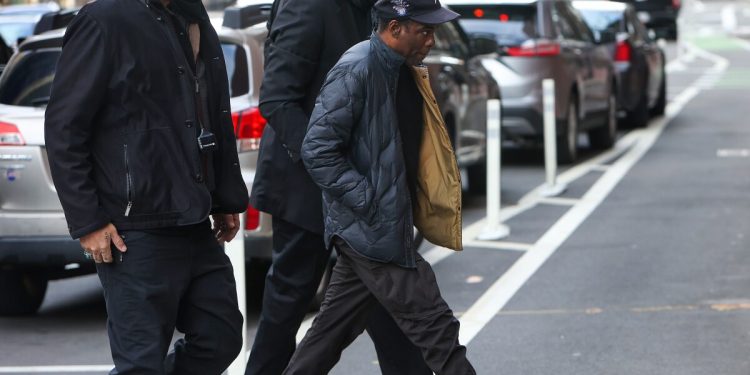 
When Chris Rock stepped onstage at the Wilbur in Boston to kick off his Ego Death World Tour on Wednesday night, he knew there was an issue to address. “How was your weekend?” he asked the sold-out crowd.

The question drew a big laugh. Rock didn’t have a great weekend. This was his first gig since the slap, or when Will Smith strode onstage at the 94th Academy Awards ceremony and slapped Rock for making a joke about Jada Pinkett Smith, Smith’s wife. “Jada, I love ya, G.I. Jane 2, can’t wait to see it,” Rock said, pointing to the couple in the crowd. Pinkett Smith rolled her eyes. She has alopecia, so a joke about her shaved head struck a nerve. Ever since Smith slapped Rock, public discourse has been dominated by the incident, from the history of abuse surrounding Black hair to the safety of performers onstage.

Even if you didn’t know Chris Rock was playing the Wilbur on Wednesday night, it was obvious from a block away that something was going on. An hour before the show kicked off, reporters and TV correspondents almost outnumbered the people waiting in line. Inside the theater, everyone’s phones were locked in Yondr pouches, to be unlocked on the way out of the door.

Comedian Rick Ingraham had the tough task of opening the show, joshing some of the front row with some crowd work while the seats filled up, house lights still on. It wasn’t clear if the show would get swallowed by spectacle, and how many attendees were there to see Chris Rock, the stand-up comedian, verses Chris Rock, the guy from “the slap.” It didn’t matter. Rock the stand-up comedian is who showed up.

The house lights finally went dark. After a humble introduction, Rock took the stage confidently, wearing an all-white outfit — open shirt, T-shirt and sneakers. He was greeted with a roar, and many rose to their feet. Rock threw his arms in the air, receiving their energy. It looked as though he might have been relieved to be out of awards ceremony hell and back in front of comedy fans.

“Ya’ll got me all misty and s—,” he said, trying to calm things down so he could get into his act before opening with the “weekend” line. “I don’t have a bunch of s— about what happened,” he said. “So if you came to hear that … I’ve got a whole show I wrote before this weekend. And I’m still kind of processing what happened.”

Rock said he might talk about the slap at some point during his set that night, but sounded ambivalent. Then his demeanor changed. The brief moment of reflection was over. It was time to start his hour. “It’s nice to just be out,” he said, launching into a riff about the pandemic. “The problem with COVID?” he said. “Not deadly enough.” That’s a startling-enough statement to stun a crowd into forgetting about the cultural debate swirling outside the theater. He had them from that moment on.

For the first night of the tour, this was an awfully tight hour. Yes, it has been five years since his “Total Blackout” tour, so Rock has had a lot of time to write. And Rock may have felt at home starting at the Wilbur, since he’s had a relationship with Bill Blumenreich, the venue promoter, going back to his days working out special material at the Comedy Connection here. But there were a lot of distractions to contend with even before the Oscars, including presenting new material and getting on the road after lockdown.

Rock’s set already has an arc. It starts wide with the pandemic, then moves on to how partisan politics are tearing apart the nation and how Democrats and Republicans aren’t helping. We were “one fat, Black security guy from us being in a dictatorship” during the Jan. 6, 2021, attack on the U.S. Capitol, he said. He spoke of companies getting demonstrative about opposing racism, like Lululemon. “They sell $100 yoga pants, he noted. “You’re not a racist, but you’re a thief.” People might prefer “$20 racist yoga pants,” he continued.

Rock then focused on his own neighborhood in New Jersey, where he noted that all of his neighbors have Black Lives Matters signs on their lawns, as if they’re trying to mark themselves safe from being racist. Rock talked about how he couldn’t relate to his kids, because he grew up poor and his kids are rich. From there, he went into his troubles with dating at the age of 57. When he saw Robert De Niro with his 11-year-old son, it was time to schedule that vasectomy, Rock said. Happening next week, by the way, so he invited interested parties to reach out while they still can.

When Rock noted that things were pretty good for him now, it appeared he might address the slap discourse for a moment — when he vaguely mentioned that “one thing” in his life recently maybe that wasn’t great. But he moved on quickly after that.

Then it was over. Rock said his goodbyes and got offstage quickly, and the house lights were up before the mic was cool. He put on a fantastic comedy show. If anyone was sad to not hear more about “the thing,” it didn’t show.

Rent Control to be Discussed at Orlando, Florida Meeting : RealEstate