Chris Rock is continuing to move on from the Oscars slap controversy, after Will Smith assaulted the comedian live in front of millions across the globe.

Rock, 57, appeared pensive as he strolled around Manhattan in New York City on Sunday.

The sighting came a day after Smith, 53, reappeared in India, a trip that is said to be for ‘spiritual purposes’ according to a Monday report. 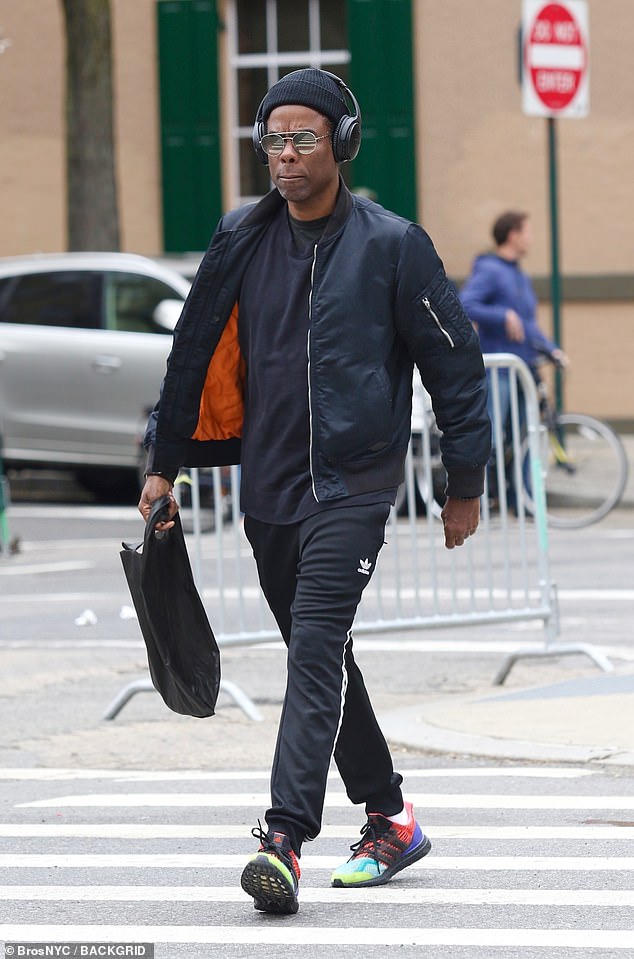 Moving on: Chris Rock looks pensive while out in NYC… as Will Smith takes trip to India for ‘spiritual purposes’ after Oscars slap

A source has claimed to PEOPLE that Smith is currently in India to practice yoga and meditation, after apologizing to Rock in a statement, where he said he ‘reacted emotionally’ to a joke about his wife Jada Pinkett Smith’s hair loss.

Smith arrived at a private airport in Mumbai, India on Saturday, the first time he has been pictured since the Oscars debacle.

Last week, Rock’s mother Rose Rock, an author and motivational speaker, spoke to WIS-TV in South Carolina about the incident.

‘You reacted to your wife giving you the side-eye and you went and made her day because she was mulled over laughing when it happened,’ Rock said.

Rose Rock said she watched from home and initially thought the incident was staged until Smith began to say ‘take my wife’s name out your f–king mouth.’ 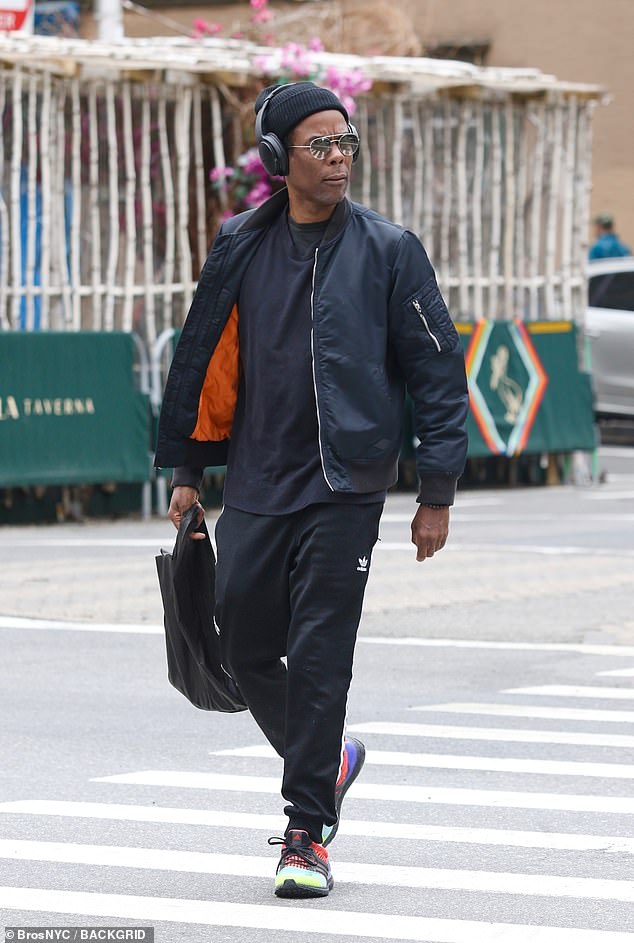 A lot on his mind: Rock, 57, appeared pensive as he strolled around Manhattan in New York City on Sunday

Rock said that her son was excited to present the award for Best Documentary Feature to friend Questlove (though Rock couldn’t know that The Roots’ drummer was going to win ahead of time) and that Smith’s actions ruined his speech.

‘No one even heard his speech. No one was able to just be in the moment because everyone was sitting there like, ‘what just happened?’

The Academy banned Smith for 10 years for his actions. Rock seemed to think this was appropriate. 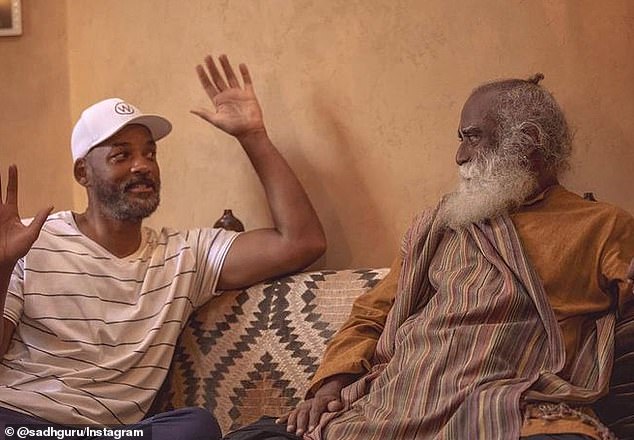 Smith is reportedly in India to meet spiritual leader Sadhguru, who Smith and his family met with back in 2020 in Los Angeles

‘I wouldn’t take his award away, and I don’t see any good way they could have taken him out without disrupting,’ she said.

Smith apologized via Instagram, which Rock found less than convincing.

‘I feel really bad that he never apologized,’ she said. ‘I mean his people wrote up a piece saying I apologize to Chris Rock, but you see something like that is personal, you reach out.’

Smith was all smiles as he landed in India Saturday – where he was seen for the first time since the infamous Oscar’s slap.

Smith was pictured touching down in a private airport in Mumbai, where he was greeted by adoring fans who he took snaps with. 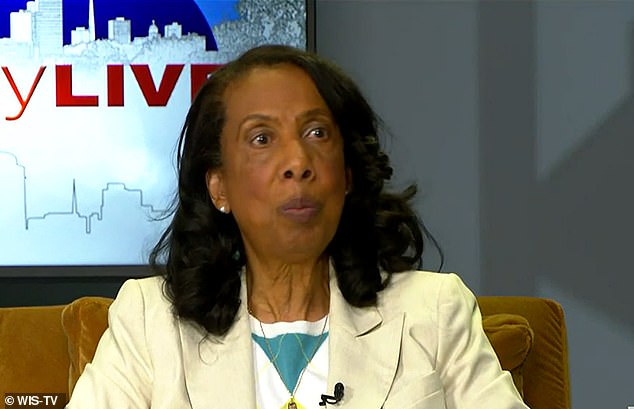 Chris Rock’s mother Rose Rock has spoken out about the slap her son took from Will Smith at the 2022 Academy Awards, blasting the actor’s actions 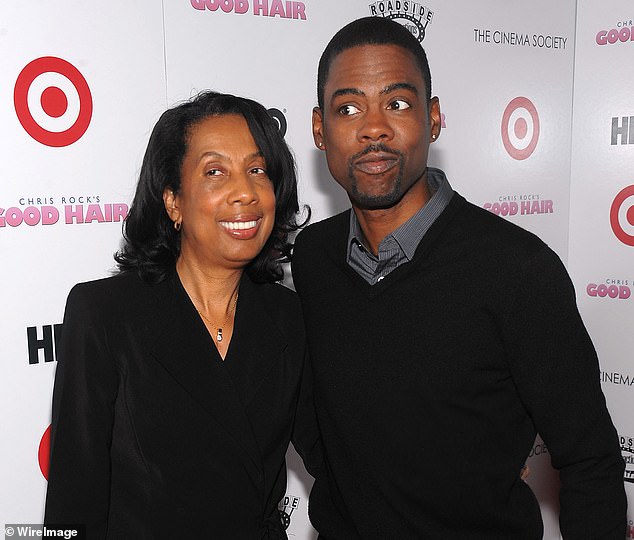 Rose Rock, an author and motivational speaker, spoke to WIS in South Carolina about the incident, in which Smith approached the stage and slapped Rock after he told a joke regarding Smith’s wife, Jada Pinkett Smith, and her shaved head

Smith is reportedly in India to meet spiritual leader Sadhguru, who Smith and his family met with back in 2020 in Los Angeles.

Dressed casually in a white t-shirt, dark grey shorts over white compression tights and a pair of Nike sneakers, Smith looked relaxed and happy after landing in the South Asian country.

As staff helped him unload his things from his vehicle nearby fans excitedly scream ‘Will, Will Smith!’

Smith then takes a couple of selfies with security and turned to the fans yelling his name, giving them a wave while flashing a smile before continuing to take a few more selfies and entering a building where he gives someone a hug.

This is the first time Smith has been spotted in public nearly a month after slapping master of ceremony and comedian Chris Rock on live TV and in front of his co-stars after he n made a joke about his wife Jada Pinkett Smith’s buzzcut. 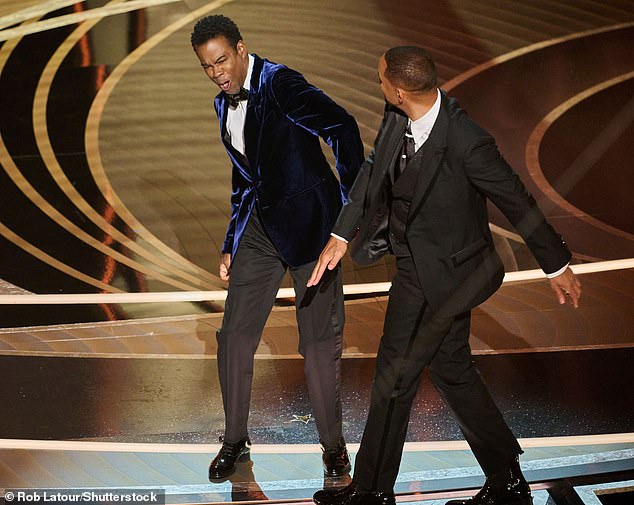 ‘You reacted to your wife giving you the side-eye and you went and made her day because she was mulled over laughing when it happened,’ Rock said of the incident

If You Notice Weakness In Your Legs, Check for Heart Failure— Best Life – Best Life