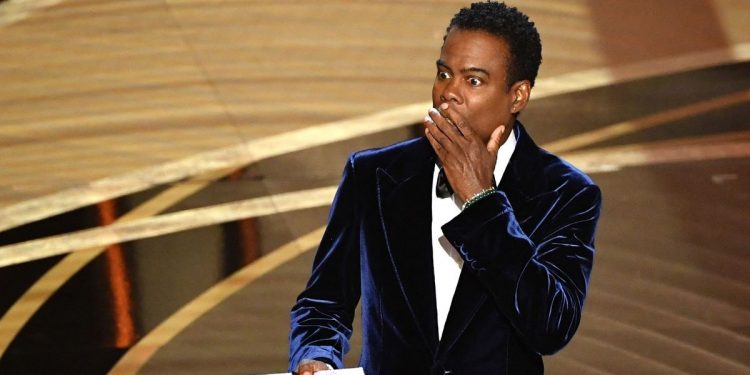 Oscars: Will Smith hits Chris Rock after he joked about Jada

Chris Rock spoke about his past experiences with bullying and letting people “walk all over him” in a podcast earlier this year.

The comedian, 57, was left stunned on Sunday when he was slapped live on air at the Oscars by Will Smith after he made a joke about Jada Pinkett Smith’s hair.

Appearing on the Fly on the Wall with Dana Carvey and David Spade podcast in January, he spoke about how being bullied as a child had affected him as an adult.

Speaking about a moment he decided to fight back against a bully, he revealed that he put a brick in his book bag.

“I swung that s*** and smacked the guy in the face with this brick and stomped on him, Joe Pesci-style, to the point that we thought he might die,” he said.

Yet the incident made him very aware of his own anger issues and he would often try his best to avoid conflict – but he said, in turn, this meant he often let people “walk all over” him.

He said: “Long story short, from that day on, as my shrink puts it to me, you have been scared to be angry ever since. The guy you saw was bending over backwards to be nice because I was so scared of my anger.”

Will Smith shocked Oscars viewers when he slapped Chris
(

However, Chris said that he has now been able to express his anger in a healthy way “without losing [his] head”.

“I’m not scared of letting people know how I feel about certain things,” he said. “Now, I can say, ‘Hey I don’t like what you said to me,’ without losing my head, without hitting someone on the head with a frickin’ brick.”

Will issued a grovelling apology to Chris on Tuesday after walking up onto the Academy Awards stage and slapping him live on air.

His Oscar win is now “under review” following his behaviour, which he himself has admitted was “unacceptable and inexcusable.

The stand-up comedian, 57, had made a reference to alopecia sufferer Jada Pinkett Smith’s shaved head by joking that he couldn’t wait for “GI Jane 2”.

Despite initially appearing to laugh, Will’s demeanour seemed to abruptly change as he stormed onto the stage and slapped Chris across the face on live TV.

Chris attempted to laugh off the awkward moment – which fans had believed was part of the show initially – but the atmosphere in the room turned when Will furiously shouted: “Keep my wife’s name out of your f***ing mouth.”