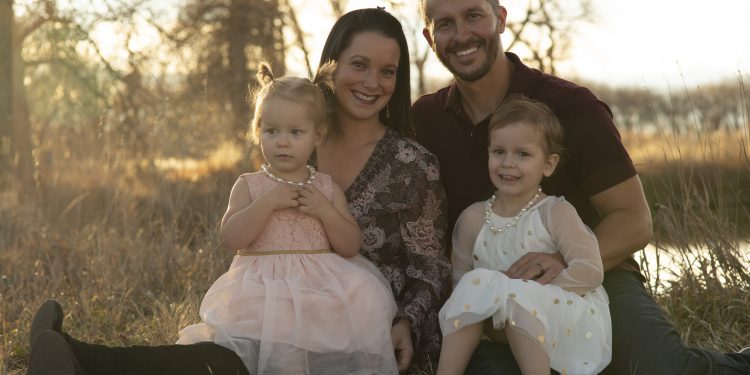 
CHRIS Watts’ family home, where he brutally murdered his pregnant wife Shanann, has secretly gone on the market, The Sun can exclusively reveal.

Watts, 36, murdered Shanann, in their Colorado home on August 13, 2018 – and then later smothered the couple’s two daughters, Bella, 4, and three-year-old Celeste, 3, at his work site.

Details of the horrific murders have been shown in the Netflix documentary American Murder: The Family Next Door, which also features footage of inside the home.

The Sun can reveal a listing of the property on Saratoga Trail that was posted by Rocket Homes a week ago and has the address as Frederick Drive, which doesn’t exist according to Google.

The front of the home is not shown, but there are 40 new photographs, featuring his wife Shanann’s choice of decor, although some rooms have been freshened up with cream paint.

The listing shows the same dark wood kitchen cabinets and the paint in some rooms remains the same, including the pale blue living area and bizarre bright blue laundry room and bathroom.

The 4,177-square foot home – newly built in 2013 when the family bought it for just under $400,000 – features five bedrooms and four bathrooms, along with three garage spaces.

Sleuths on a private Facebook account named ‘The Watts Family Murders’ first spotted the listing and began comparing the rooms from footage seen during the investigation.

In an effort to stop true crime fans flocking to the house, which has reportedly become a creepy tourist destination, the site insists there will be “limited showings” and potential buyers need proof of funds.

A description on the listing reads: “If you are interested in this home, please submit a funding commitment letter from your bank for at least $660,000.

“Letters must be submitted by May 24, 2022. We will contact you to arrange a showing.

“There will be limited showings of the house followed by the acceptance of bids with a minimum bid of $660,000.”

It adds: “Buyer’s agent must be present with you at your showing. Home is sold as-is. Buyer to verify square footage.”

The Sun contacted Rocket Homes to ask about the property belonging to Chris Watts and his family.

“It is for sale, it’s [a] five-bedroom, four-bath,” a rep told The Sun when contacted on Friday, confirming the listing is real.

The rep then further claimed the listing is held by Coldwell Banker Realty in Colorado.

The Sun contacted Coldwell Banker, and a rep put the phone down when asked about the listing for the purpose of a news story.

Since Watts’ arrest, the Frederick, Colorado, the home has remained vacant and he defaulted on the mortgage.

The lender later foreclosed on the home, People reported, and it was put up for auction in 2019 but nobody wanted to buy it.

According to details seen by The Sun on the Weld County Property Portal, the grantee was changed from Chris Watts to Shanann’s father Franklin [Frank] Rzucek, Sr, on April 4.

The Sun reached out to Shanann’s family for comment, but when asked about the house sale, they put the phone down.

In footage from CBS Denver earlier this month, her father is seen being interviewed in the home where she was murdered almost four years ago, taking the camera crew on a tour of the property.

He says the home is filled with “a lot of memories,” adding: “[I] walk through that front door, I look up at the balcony, and that’s where the girls would be every day when I came home from work.

“To this day I look at that balcony, it’s very hard,” he added.

Through tears sitting in the kitchen, he said their family had to deal with countless conspiracy theories online that they were involved in the murders.

He told the reporter: “It’s a nightmare that goes on every day, it doesn’t go away.”

Meanwhile, his son Frankie also confirmed the family home is yet to sell, by sharing on his YouTube channel: “Oh and another thing, SHANNAN’S HOUSE ISN’T SOLD.

“Don’t believe the scamming con artists and frauds. They talk out their asses. They copy each other and all talk the same lie, it’s hilarious actually.

“All of their defamation, lies, and rumors are being documented with my attorneys though.”

Vile Watts tried to blame the callous murders of his wife and two young daughters on his mistress, a former inmate told The Sun exclusively this month.

During the investigation, it was revealed that he had been having an affair with co-worker Nichol Kessinger and planned on starting a new life with her.

He is currently serving five life sentences without the possibility of parole at the Dodge Correctional Institution in Waupun, Wisconsin.

Former inmate Carter, 35, who was serving time for possession of methamphetamine and theft when he became close with Watts, claimed: “We were on the same unit together, unit 11.

“It’s for people that can’t fit in with the general population and people with medical issues.

“One day we were reading the Bible and talking about God, this was in October 2020.

“I told him that I couldn’t judge him for what had happened, but I’d like to know what was going through his head.”

According to Carter, that’s when Watts unbelievably said: “Nichol had smothered the girls with their blankets and they suffocated.”

Watts also claimed she helped him “get the girls in the oil tanks and dig the grave for Shanann”, Carter added.

Kessinger, 33, took on a new identity and moved away from her home in Arvada, Colorado after Watts was arrested.

She told police during their investigation that Watts had lied that he was separated from his wife and planned to divorce her and she believed him.

After she heard the news of his family’s disappearance, Kessinger said she texted Watts demanding to know if he was involved.

Writing to her just hours after brutally wiping out his family, she said Watts responded: “I didn’t hurt my family, Nicky.”

She said that those were the last texts they exchanged before Watts was arrested on August 15, 2018.

There is no suggestion she was truly involved in his crimes in any way.