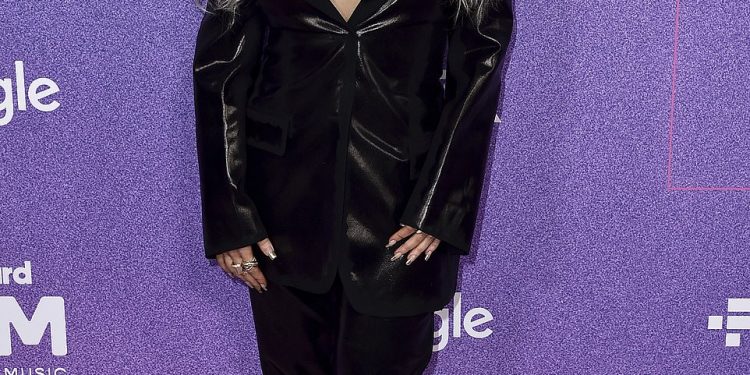 
She was one of the most famous pop divas of the early 2000s, but two decades later Christina Aguilera proved she is still turning heads while attending Billboard’s 2022 Women In Music Awards show in Los Angeles on Wednesday evening.

The 41-year-old singer risked a wardrobe malfunction as she went shirtless under a suit that left little room for error as she posed for red carpet photos at the annual event.

And with the Xtina side of the pop star rearing its pretty and provocative face alongside H.E.R. during the red carpet portion of the event, a nip slip, or even worse, was a real possibility, if the proper precautions weren’t put into use. 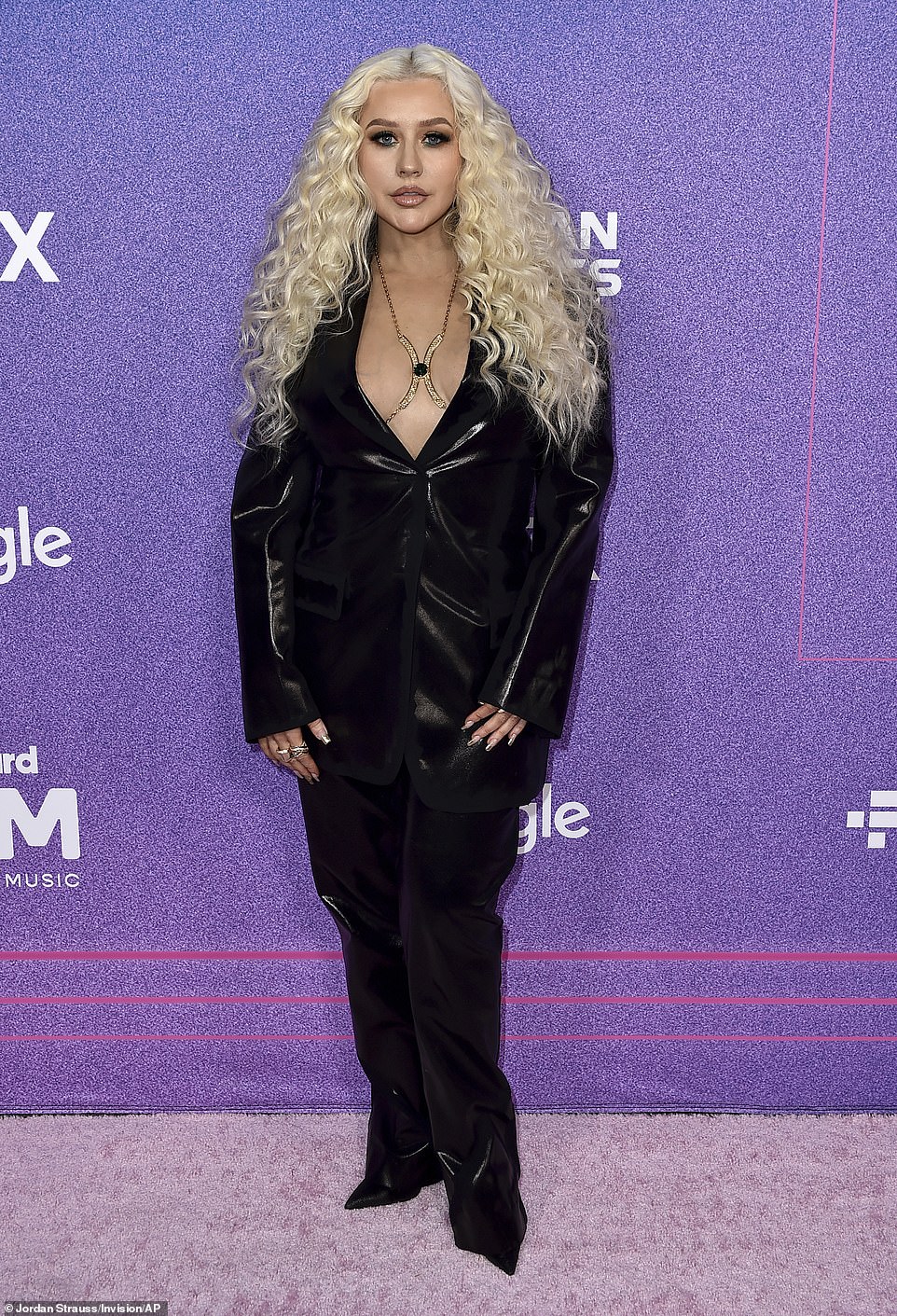 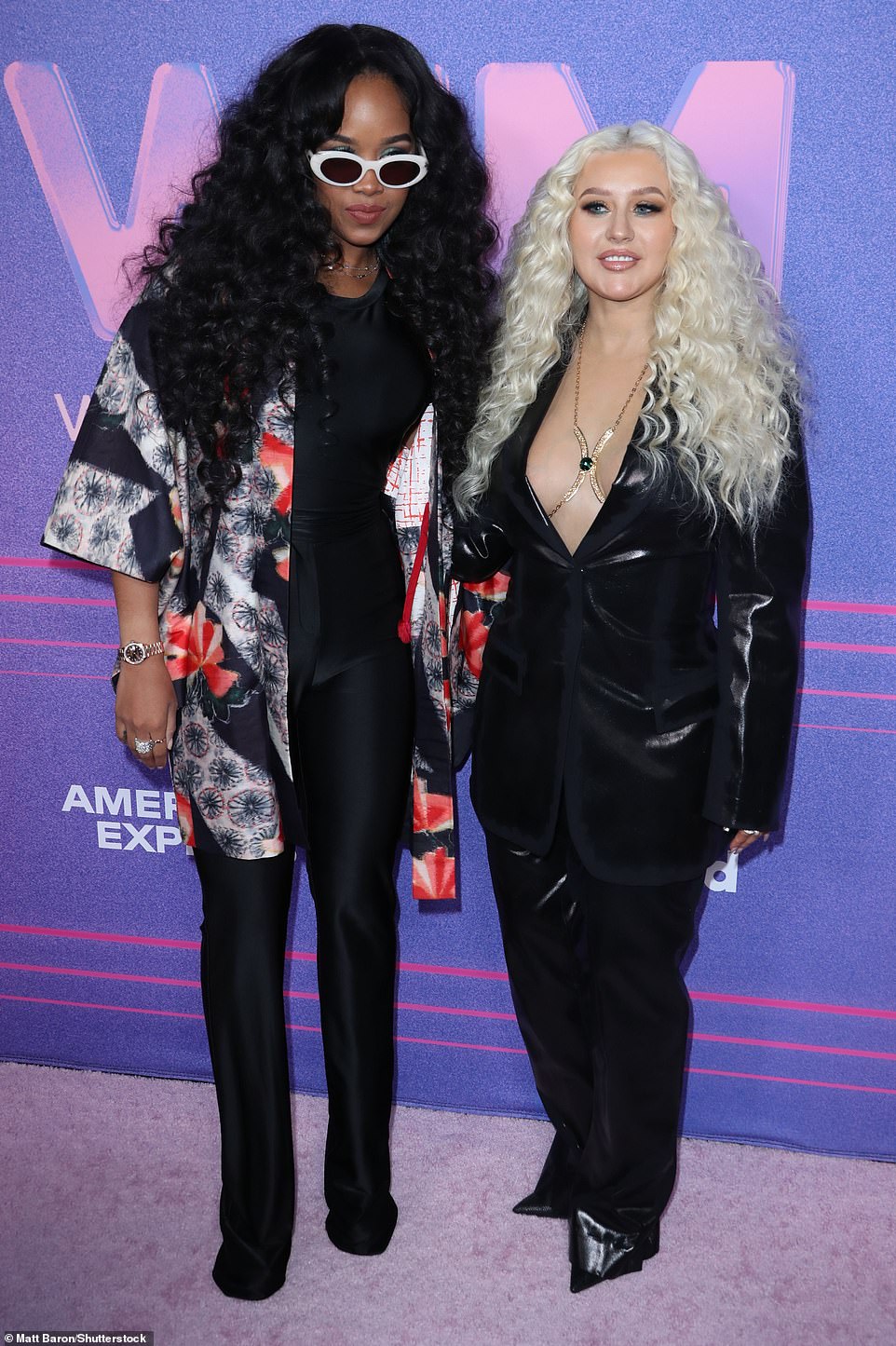 Daring: Aguilera, 41, went topless and braless when she wore a shiny black suit alongside H.E.R., 24, during the red carpet phase of the evening

Aguilera, 41, stepped out in front of the group of photographers decked out in a shiny black suit with a loose design, which is a departure from her Xtina days of yesterday.

But be sure, the Stripped star still brought that edginess, in terms of fashion, when she strutted her stuff by wearing her blazer without a top. In fact, in its place, she donned a gold jewelry piece that outlined her exposed cleavage.

It’s highly likely that she and her glam squad had to use some sort of adhesive to make sure the lapel of her blazer remained secured over her breasts. 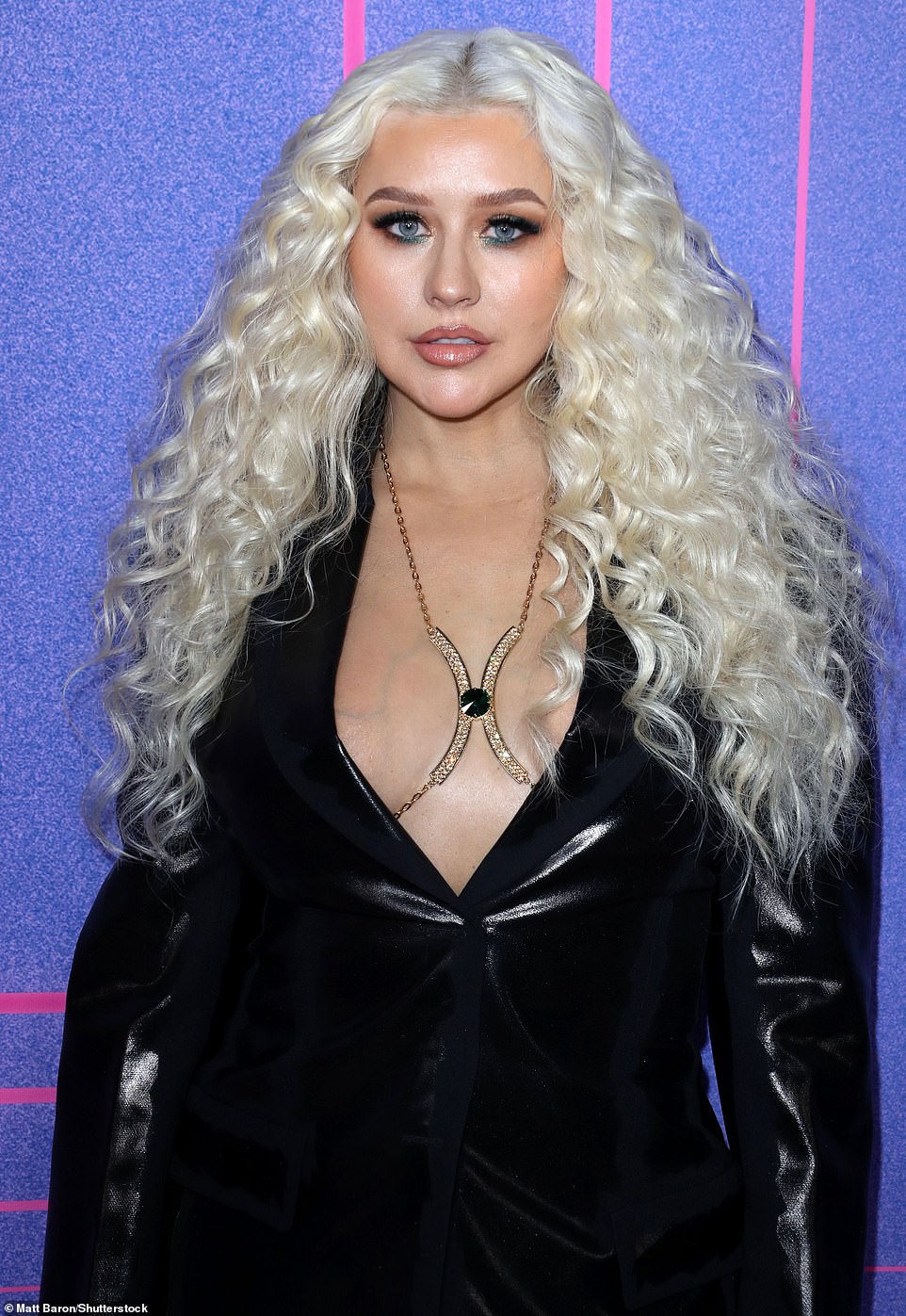 Xtina time: Not only did the Stripped star go topless and braless, she also donned a gold jewelry piece that outlined her exposed cleavage 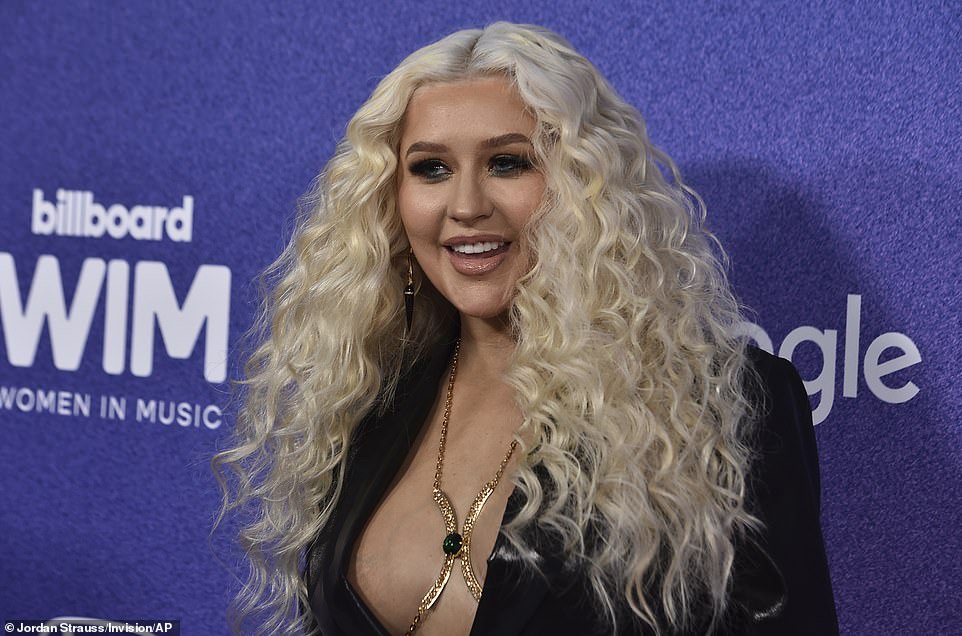 Lovely: The Beautiful singer had her platinum blonde tresses styled with plenty of curls and volume while posing in front of photographers

With H.E.R. (born Gabriella Sarmiento Wilson) by her side for part of the red carpet phase of the evening, the playful ladies were moving frontwards, backwards, and side-to side, striking various poses.

And all that movement could make for some tense fashion moments.

Decked out in black pants and a black, red and white button-down over a black top, H.E.R’s ensemble didn’t evoke any of those same worries or concerns.

And any lover of a great mane would adore the Fight For You star’s hairstyle for the event. It flowed well past the middle of her back, with a hefty dose of volume, natural curls, and a part in the middle.

For an added touch of pop star chic, she wore retro white-rim sunglasses that would have made any diva from the 1940s and 50s proud. 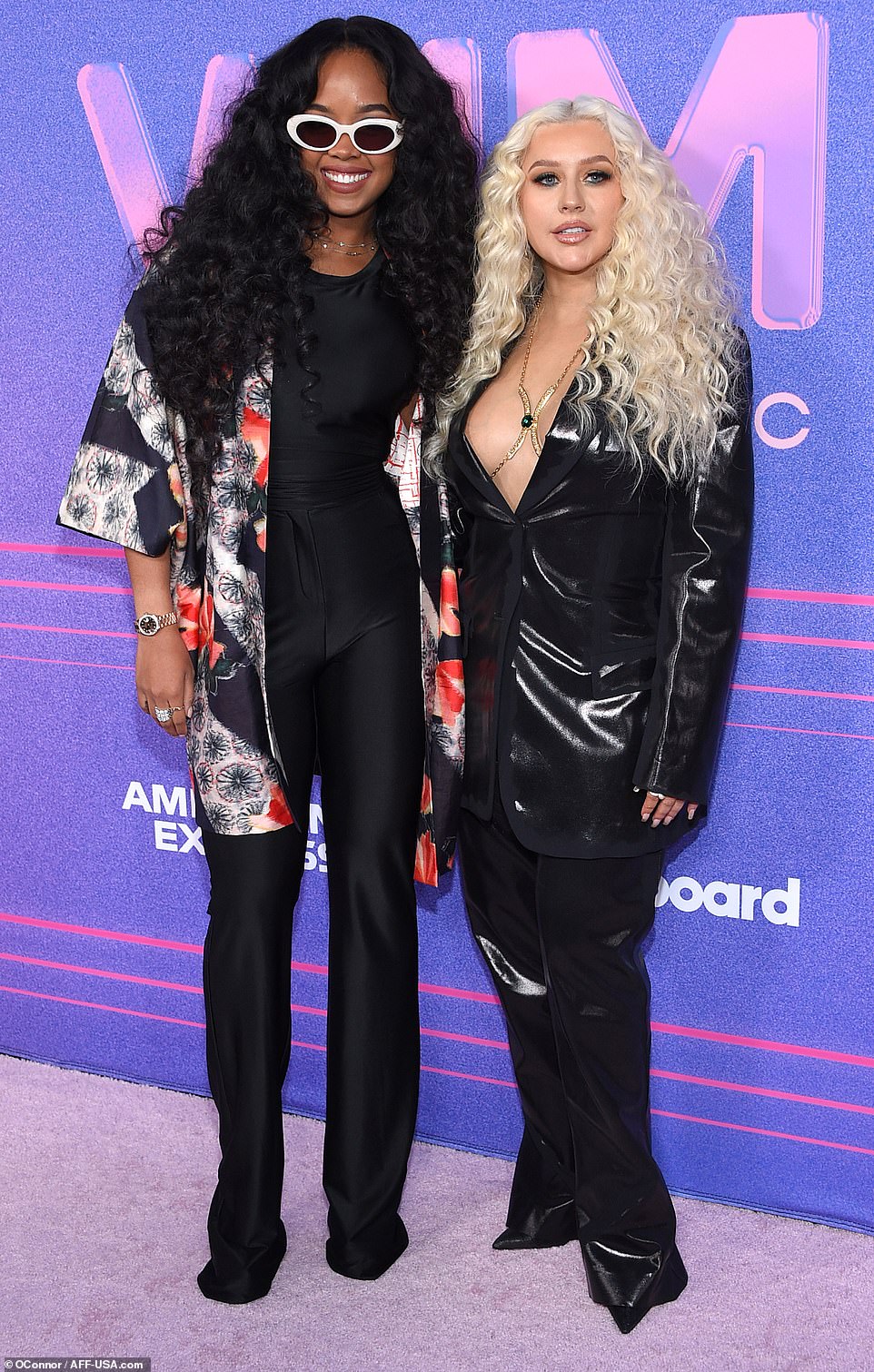 Far more conservative: H.E.R. was decked out in black pants and a black, red and white button-down over a black top 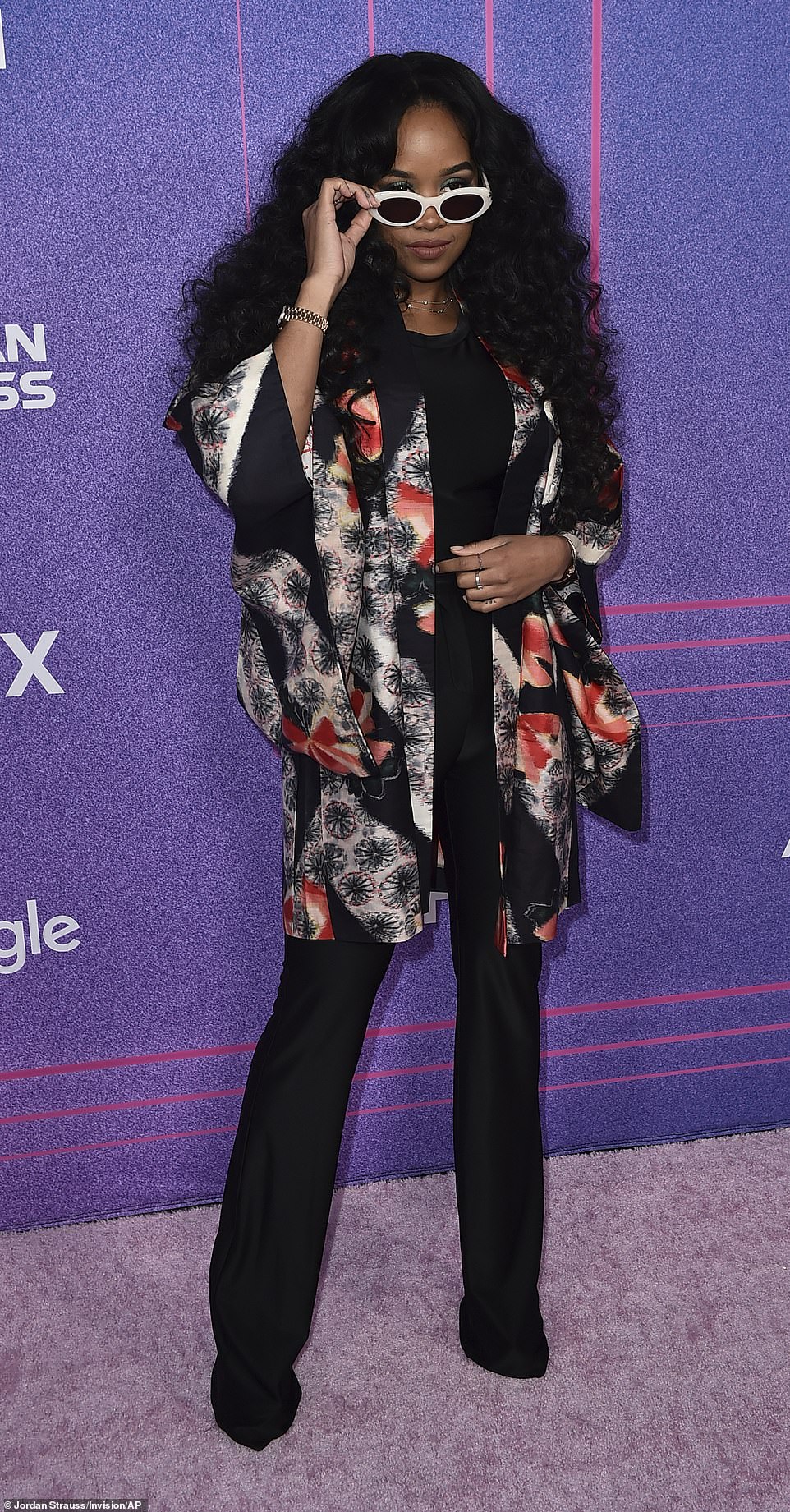 Nod and a wink: The California native got flirty with glance over her sunglasses 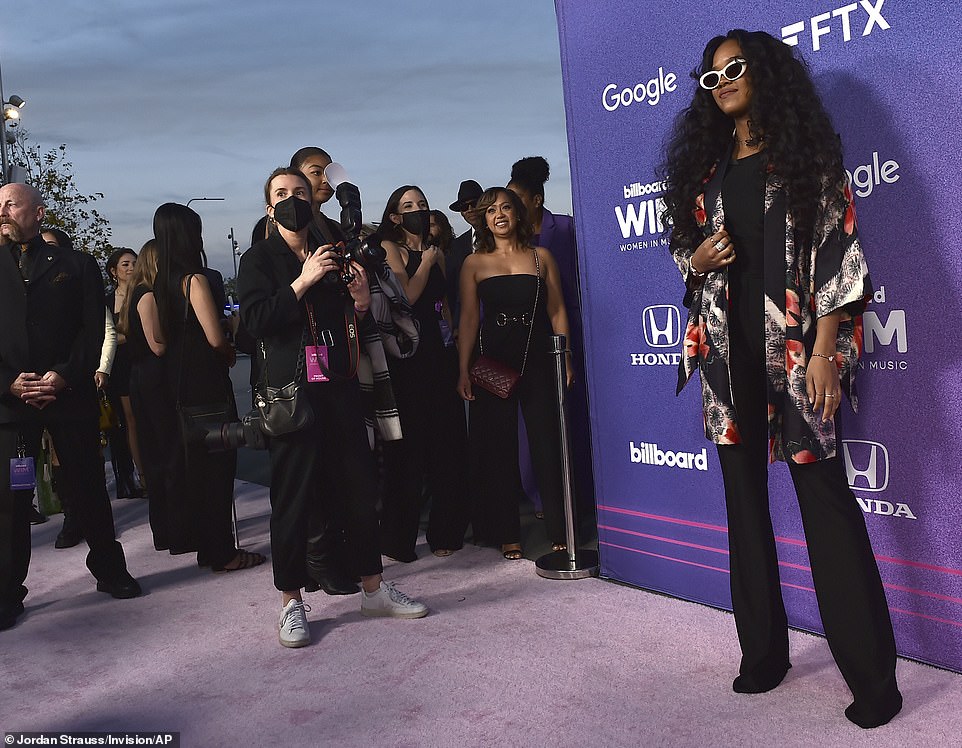 Frenzy: The two stars had photographers and fans scrambling for good viewing positions 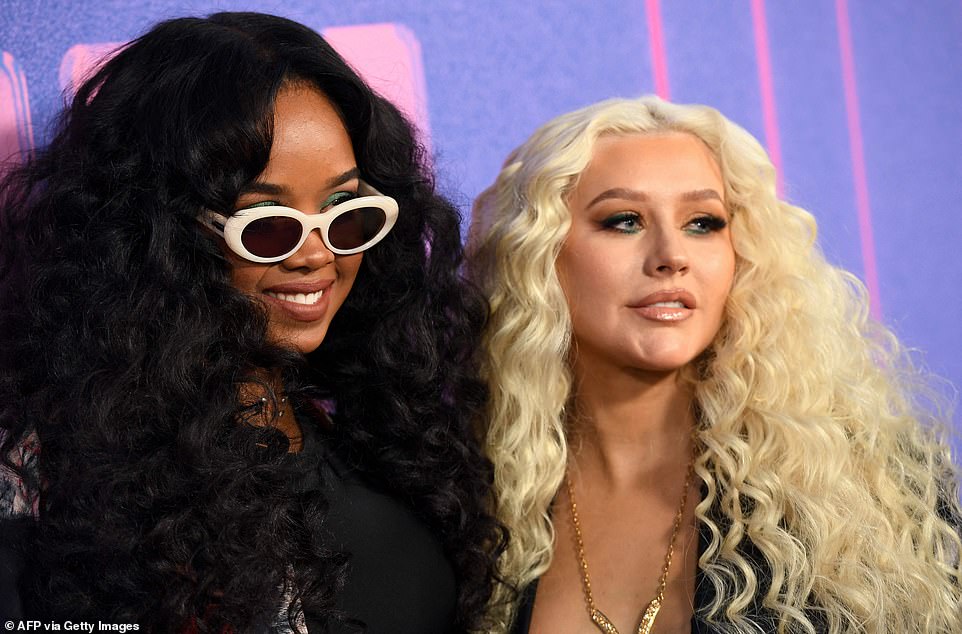 Big hair: H.E.R and Aguilera left little doubt as to who brought the hair volume contest

During the show, H.E.R received the Impact Award, which is given to an artist who uses their musical platform to create positive change while advocating on behalf of women in — and beyond — the music industry.

The Woman Of The Year award, considered one of the main honors, was established to recognize ‘women in the music industry who have made significant contributions to the business and who, through their work and continued success, inspire generations of women to take on increasing responsibilities within the field’, according to the magazine. 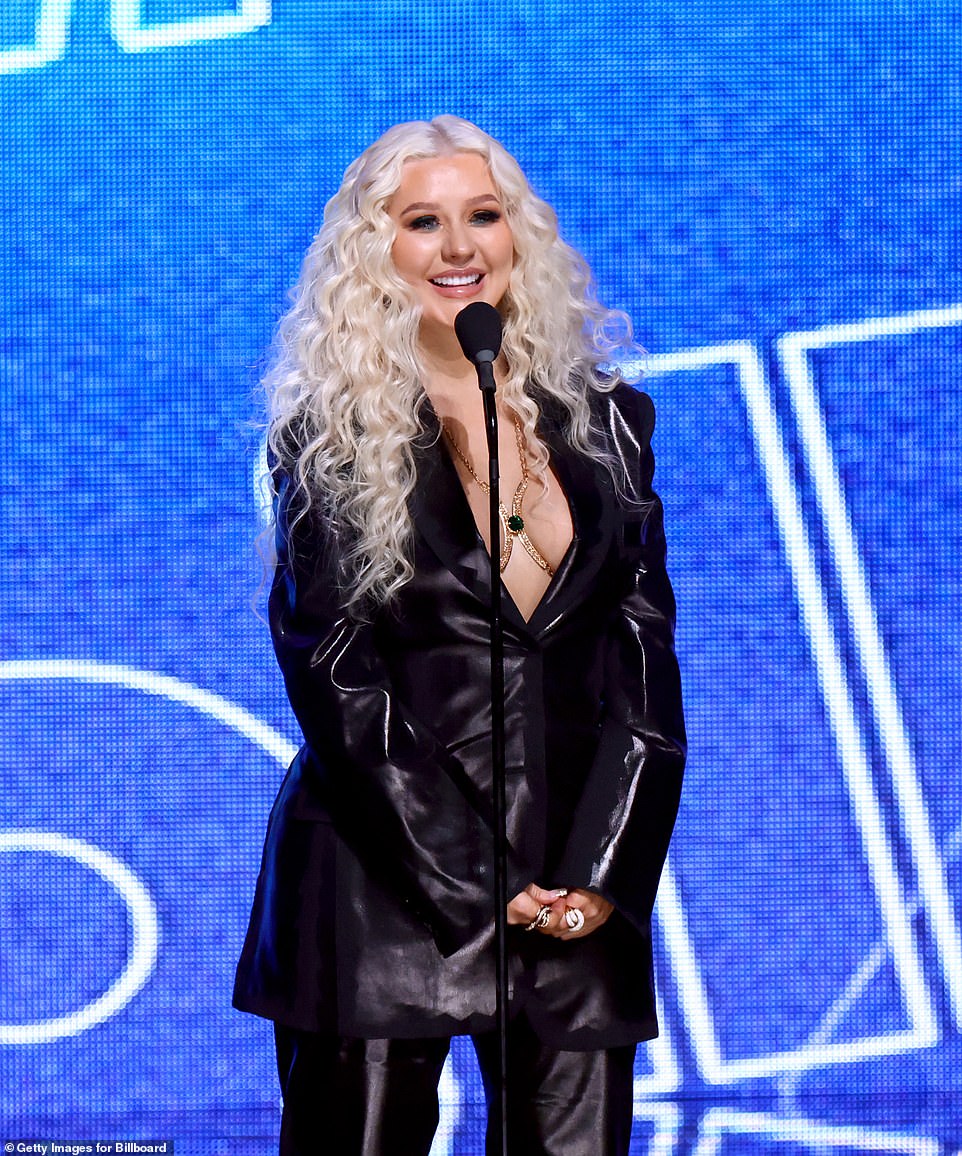 Glowing: The Can’t Hold Us Down” star was all smiles when she hit the stage during the show 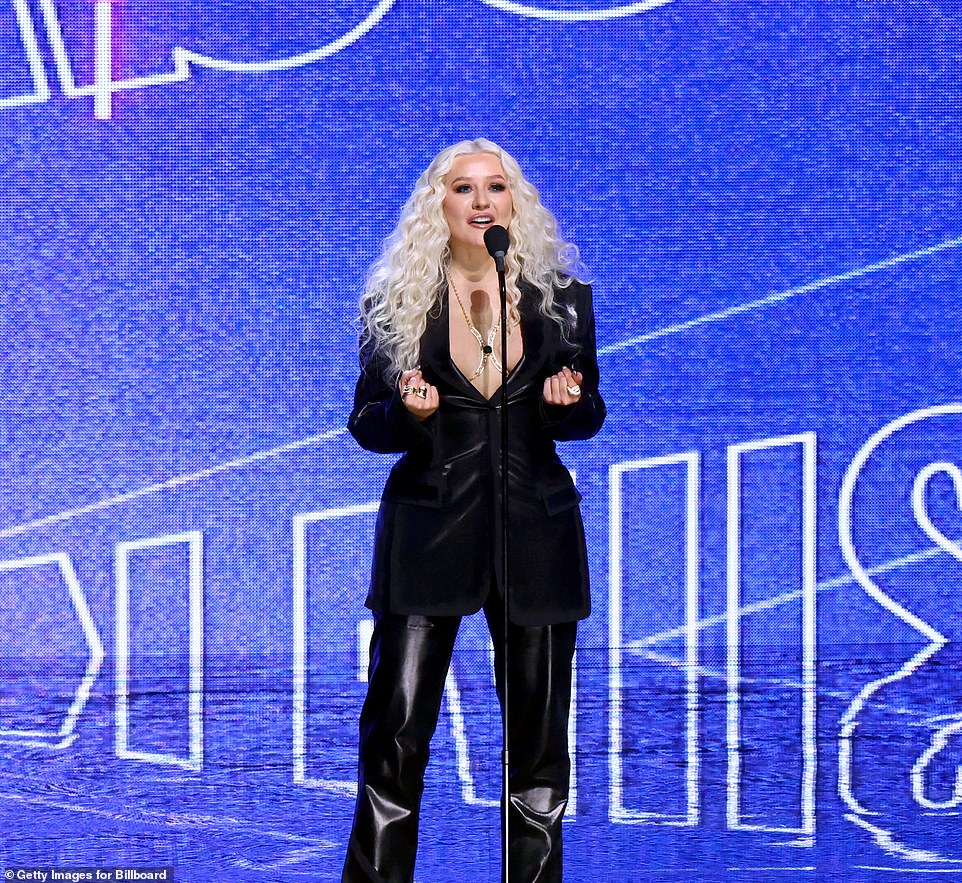 Bonafide pop star: With estimated sales over 75 million records, she is recognized as one of the world’s best-selling musical artists 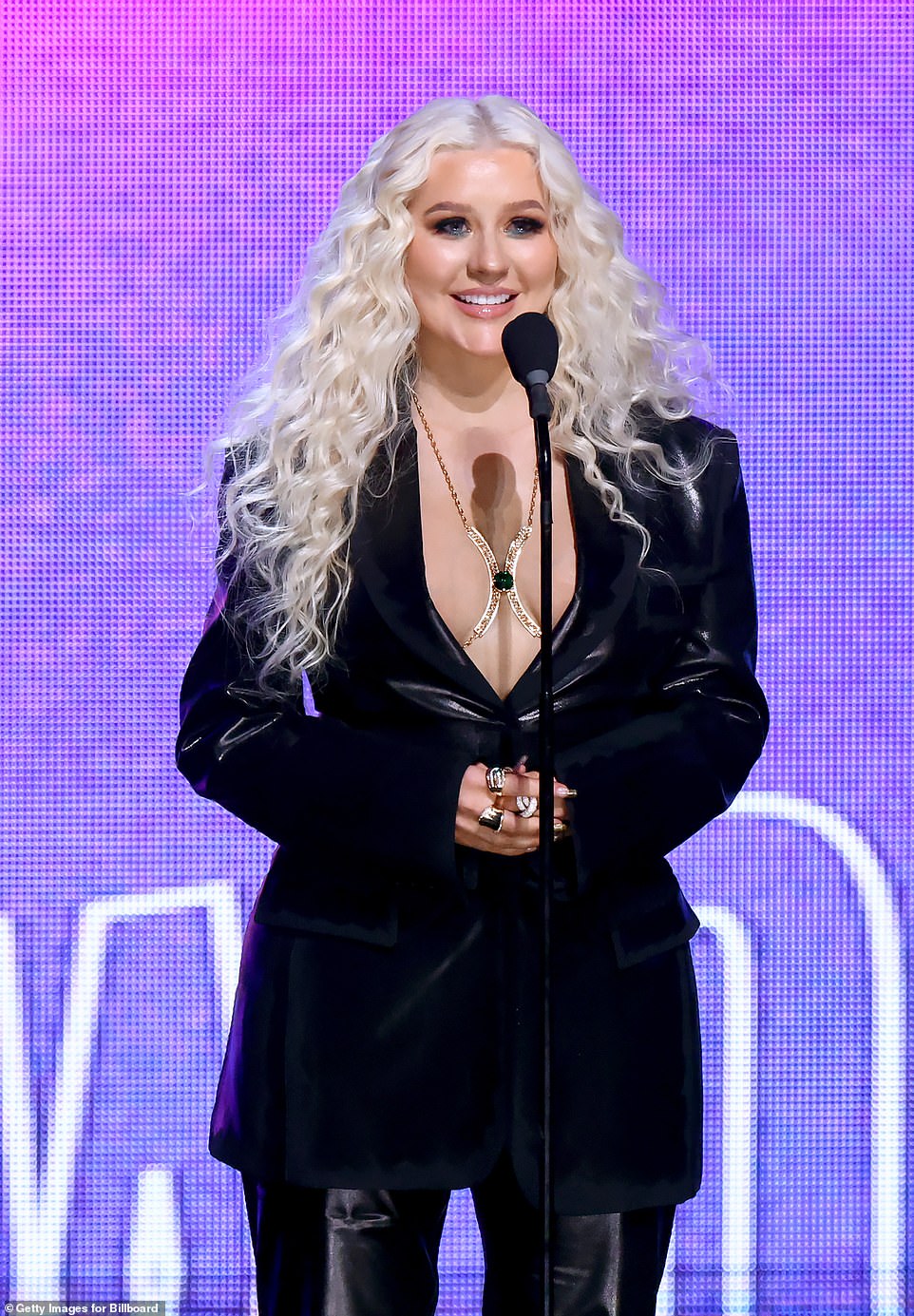 Vocal chops: Aguilera has been cited as one of the greatest singers in contemporary pop music in a number of publications such as Rolling Stone and Consequence Of Sound

Olivia Rodrigo – Woman Of The Year