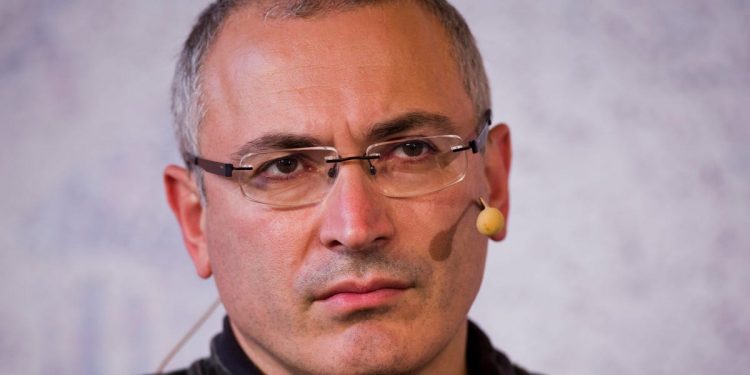 
Exiled Russian oligarch Mikhail Khodorkovsky said Russian President Vladimir Putin could face massive political backlash if he were to continue to send high numbers of conscripted soldiers from big cities in Russia to fight in Ukraine.

During an interview with the Atlantic Council, Khodorkovsky weighed in whether he thought if Putin would send new waves of conscripts to Ukraine after NATO estimated that 7,000 to 15,000 Russian troops have been killed in the war so far.

He said the scenario was possible and that “the value of human life in Russia, is not as high as one would like to see it be.”

“Especially when we are talking about people who live in the north Caucasus, or people who live in tiny villages and settlements,” Khodorkovsky said. “Knowing this, Putin is taking his soldiers specifically from those places. And he pays such money for their deaths, forcing their close relatives to keep their mouths shut.”

On March 9, after weeks of denying, the Russian government admitted that it had sent young conscripts to Ukraine. Khodorkovsky was asked about the possibility of Putin sending 100,000 to 200,000 more conscripted soldiers to Ukraine, which he said would be a “extremely heavy” political decision for the Russian president.

“Without a doubt, such a step, if Putin is forced to take it, is going to be politically extremely heavy for him. And even more, he could call up a million people, but then big cities are going to end up in coffins,” Khodorkovsky said. “Big cities where public opinion is entirely different as to the value of human life, and for Putin that would be a massive problem on the eve of a transfer of power in 2024.”

Khodorkovsky was formerly an oil tycoon living in Russia and was jailed by Putin’s government in 2003 after being charged with financial crimes. During the nine years he was imprisoned, he maintained that he was jailed for political reasons. Since his release in 2013, Khodorkovsky has been an active member of Russia’s exiled opposition.

In the interview, he reiterated his belief that Putin believes he is “at war with the US and NATO.”

In March, the UN said at least 1,119 civilians had been killed in Russia’s war on Ukraine. NATO has estimated that between 7,000 and 15,000 Russian troops have died during the course of the war, while Russia has claimed that 1,351 of its soldiers have been killed.

In his last update on troop deaths on March 12, Ukrainian President Volodymyr Zelensky said 1,300 Ukrainian soldiers had died in the war.