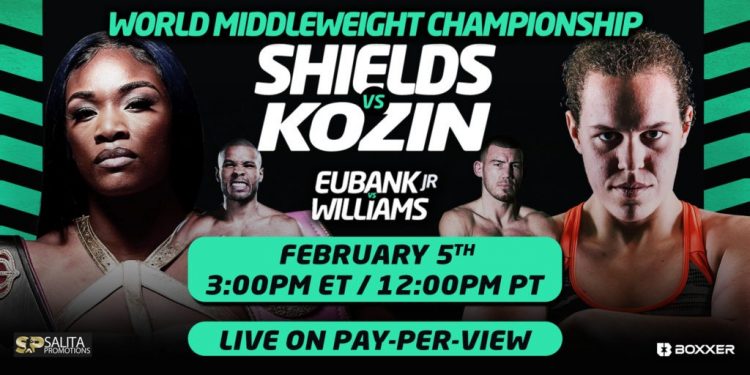 Shields has moved her training camp to Las Vegas as she prepares for the altitude she’ll experience when stepping into the ring at Motorpoint Arena Cardiff in Wales for her U.K. debut as a pro. The four-fight PPV card begins at 3 p.m. ET/12 p.m. PT and features star U.K. middleweights Chris Eubank Jr. and Liam Williams meeting in the main event.

Guided by Salita Promotions, Shields signed a lucrative multi-fight deal with promoter Boxxer and broadcaster SKY Sports in the U.K. that has put her on the path toward a super fight showdown with WBO Middleweight Champion Savannah Marshall in 2022.

Shields met with media Tuesday at Mayweather Boxing Club, where she is conducting training in Las Vegas, and discussed adding co-trainer Gerald Tucker to her team and more. Here is what Shields, and her promoter Dmitriy Salita, had to say:

“I just wanted some new eyes in my camp. I’ve always wanted two different coaches with two different styles in my corner. He fits into my team perfectly.

“Gerald works with Floyd Mayweather, so he brings a different kind of boxing conditioning. He does the pads differently than how I’ve ever done them. We’re able to add some things and my coaches are totally in sync.”

On a potential showdown with Savannah Marshall:

“I’ve never focused on Savannah. She’s been focused on me. If you watch her interviews, she’s always talking about Claressa Shields. I’m definitely happy that the fight with her is getting closer. They’re going to see why I’m a 12-time champion. There is just a huge difference in what we can do as fighters.”

On making her U.K. debut as a professional (Shields won the gold medal at the 2012 Olympic games in London):

“I feel like I’m returning to my old stomping grounds. I’m excited to perform and show everyone in the U.K. how I’ve gotten better as a fighter. When they saw me in the Olympics, I was still a teenager.

“I don’t think they’ve seen my style of boxing over there yet. I’m bringing my ferociousness and my swag. I’m going to show them why I’m pound-for-pound. They should all come out and watch this fight, because I’m building all kinds of new strength and power.”

On switching from MMA training camps back to boxing:

“The mental part is the biggest thing for me. I definitely enjoy learning MMA, so when I’m back to boxing, I have to make that switch back to knowing I just have my left and my right hands. My preference is still boxing training though. I’m still getting better and learning more, even with all I’ve accomplished in boxing so far.”

“Claressa is taking this fight very seriously and is leaving no stone unturned in her preparations. From her work in the gym, to adding Gerald Tucker to her already excellent corner, which includes one of the best trainers in the sport in John David Jackson, I really think this is one of the best training camps of her career.

“I look forward to a statement-making performance against the undefeated and very capable Ema Kozin on Saturday, February 5. All of this hard work is being put in en route to the biggest fight in woman’s boxing history against Savannah Marshall.”

Salita Promotions was founded in 2010 by Dmitriy Salita, a professional boxer and world-title challenger who saw the need for a promotional entity to feature boxing’s best young prospects and established contenders in North America and around the world. Viewers watching fighters on worldwide television networks including SHOWTIME, HBO, ESPN, Spike TV, Universal Sports Network, UFC Fight Pass, DAZN, ESPN+ and MSG have enjoyed Salita Promotions fight action in recent years. We pride ourselves on offering our fighters opportunities inside and outside the ring. Salita Promotions looks forward to continuing to grow and serve the needs of fight fans around the globe.

Check the Salita Promotions YOUTUBE CHANNEL for regular updates of the modern world’s greatest fighters, contenders and prospects in action.

**HOW TO WATCH THE February 5 – Claressa Shields vs. Ema Kozin PPV**

TV: Cable, satellite & telco PPV providers, including Xfinity, Spectrum, Contour, Fios, and Optimum, among others (U.S.), as well as leading operators in Canada.