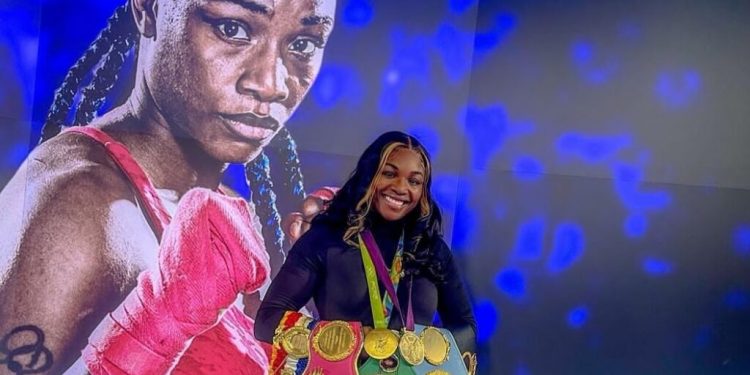 
Claressa Shields vs. Savannah Marshall is more than just potentially the first-ever women’s headlining Pay-Per-View event in the United Kingdom. It’s a long-awaited grudge match with the potential for both fighters to build their brand globally. The fight is expected to take place this summer.

According to credible sources reporting to NYFights.com, there is an ongoing issue with the venue. While Shields reportedly has no issue with the fighting taking place in the U.K., she is not on board with the bout taking place in Marshall’s hometown of Newcastle. Therefore, the fight will likely land at London’s O2 Arena barring any unforeseen changes.

Marshall defended her WBO middleweight title for the third time over the weekend when she laid out Femke Hermans in a third-round destruction at Newcastle Arena. She initially won the title after Shields vacated the belt following her one-sided unanimous decision victory over Christina Hammer in April 2019 to become the undisputed champion at 160-pounds. Marshall won the relinquished belt with a seventh-round stoppage of Hannah Rankin on Halloween night in 2020.

Shields (12-0, 2 KOs), who suffered the only loss of her 78-bout amateur career to Marshall in the 2012 World Amateur Championships in China, still holds the WBC, IBF, and WBA middleweight belts. Therefore, the dual Olympic gold medalist will have a chance to become a two-time 160-pound undisputed world champion. Furthermore, the 27-year-old is also a former undisputed junior middleweight world champion.

Although Shields labels herself as the ‘Greatest Women of All-Time [GWOAT], Marshall promises to steal the moniker with a win. This fight has all of the ingredients to be a must see event.

Shields, however, confronted Marshall in the ring following her win against Hermans. Once their brief soirée had concluded, Shields turned her attention to the nearest camera. “Understand it. She’s not fuc*ing with me. She’s too fuc*ing little,” Shields stated, albeit Marshall stands at 5′ 11½″ to her 5′ 8″. “I’m here in the U.K. they don’t fuc*ing scare me.

“I told her, ‘Bring that punching power with her in the summer,’ I don’t want to hear no excuses. When I beat her, I want everybody to remember, that she said she was the biggest puncher in the middleweight division. I’mma tell everybody, punching power can’t do sh** with me. Nothing! I’m going to match her with power; I’m going to match her with skill, defense, everything. She’s going to feel like she’s an amateur. She’s going to be like, ‘Damn! I think I’m in here fighting a man with skill, power, everything.’ She’s outmatched.”

Marshall (12-0, 10 KOs), 30, from Hartlepool, County Durham, has knocked out her last eight opponents, although she has never fought someone in the pro ranks with the accolades of Shields. “There’s no one else in the way between me and Claressa; it’s me and Claressa in the summer,” Marshall said.”Claressa can’t handle my power. I believe I severely hurt Claressa. It’s Great Britain versus America. It’s got to happen here in the northeast [of England]. After I beat her, they will have to call me GWOAT.”

No matter what happens in the summer, the winner will undoubtedly become the biggest star in women’s boxing.