Clearing The Inbox: ETFs That Hold Only Russian Equities 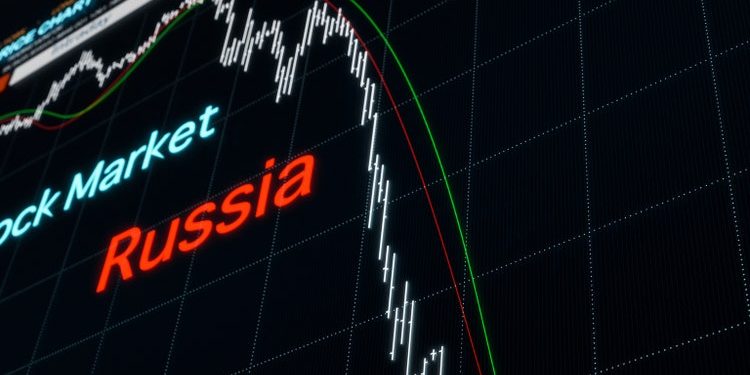 
Exchange-Traded Funds (ETFs) holding only Russian equities have had creations suspended and trading halted since the war in Ukraine commenced. David Mann, Head of Global ETF Capital Markets, addresses the most commonly asked questions on these events.

Watching the tragic human toll caused by Russia’s invasion of Ukraine makes it difficult to focus on mundane topics such as the ETF ecosystem. The world’s response to this act of aggression and specifically the sanctions implemented against Russia have greatly impacted access to their financial markets. This, in turn, has had a significant impact on ETFs that primarily hold Russian equities (full disclosure: we have one of those). For this week’s newsletter, I will attempt to summarize the questions we received about ETFs that only hold Russian equities.

Can you explain the excessive premiums to net asset value (NAV) before trading was halted?

During trading that occurred specifically between the start of the invasion (2/24/22) and when NYSE Arca announced halting (3/4/22) ETFs holding only Russian securities saw some of the highest premiums I’ve ever seen in relation to NAV – over 1,000% at times.

To put that 1,000% into context, consider that in March 2020, during the onset of the global pandemic, the highest premiums on the same ETFs were around 5% to 10%. The lowest discounts were in the 10-15% range.

At the time, I blogged about wider spreads and greater premiums and discounts during moments of heightened market uncertainty. Since markets for the underlying Russian securities were closed, the uncertainty pertaining to Russian stocks was incredibly high. The US authorized participants (as well as the ETFs themselves) were restricted from buying, selling, or settling Russian securities. Broad economic sanctions were announced almost daily, leaving investors in the lurch as they tried to navigate the potential impact of those sanctions.

Surprisingly, I don’t have much to add to this topic from what I wrote two years ago: when there is uncertainty to that extent, trading will look more like single stocks or closed-end funds than open-ended ETFs. That was certainly the case during the first week of trading after the Russian invasion began.

What about creations and redemptions for ETFs that hold Russian equities?

Earlier I mentioned the inability of authorized participants (APs) to buy, sell or settle Russian equities. It’s important to know this is much broader than the plumbing of the ETF ecosystem. We have seen a growing trend of corporations across all industries ceasing their Russian businesses and/or operations. That certainly applies to Western banks as well, many of whom are Authorized Participants.

As a reminder, APs have the right but not the obligation to transact in the primary market. I’ve wondered over the years what would cause an AP not to want to create or redeem shares. Here, it’s not surprising that many of them hit the pause button on doing business in Russia.

Given how often ETFs are championed as “price discovery vehicles,” why were ETFs that hold Russian equities halted for trading?

The decision to halt trading was made by NYSE Arca, but I can speculate on its motivations based on the timeline during that first week of the invasion. In those initial days following the attack, the world was processing the potential fallout from Russia’s actions, including what that might mean for financial markets. (Put another way, there was a tremendous amount of uncertainty to the uncertainty). As the news out of Ukraine worsened, some level of clarity emerged, indicating that no short-term or even medium-term path to normalcy was possible. The Russian financial markets were then suspended indefinitely.

Beyond the lack of access to Russian financial markets, there were also diminishing valuations for those underlying Russian securities. Many large index providers announced plans to remove Russian equities from their indexes at a value of $0. ETF issuers were also fair valuing most Russian equities at close to $0.

Given the indefinite lack of access to Russian financial markets alongside equity valuations of almost $0, a halt in trading made a lot of sense.

What about other broad-based index-tracking ETFs, which have % allocation/exposure to Russia?

While there may be some unique instances that I am not aware of, from my vantage point I see most broad-based ETFs with exposure to Russia (for example, Emerging Market Index ETFs) trading and behaving as I would expect in terms of their usual spreads and premiums/discounts. As I mentioned earlier, index providers valued those Russian equities at $0 and removed them from their constituents. From an ETF perspective, the creation and redemption process can proceed as usual without any Russian equities included.

Without trying to sound too cliché, I have been in the ETF business for almost 20 years and have never seen an underlying country’s financial markets behave like this within one of our ETFs. Given the nightly atrocities we are seeing on television, I wish I never had.

What Are the Risks?

All investments involve risks, including possible loss of principal. The value of investments can go down as well as up, and investors may not get back the full amount invested. Generally, those offering potential for higher returns are accompanied by a higher degree of risk. Investments in foreign securities involve special risks including currency fluctuations, economic instability and political developments. Investments in emerging markets, of which frontier markets are a subset, involve heightened risks related to the same factors, in addition to those associated with these markets’ smaller size, lesser liquidity and lack of established legal, political, business and social frameworks to support securities markets. Because these frameworks are typically even less developed in frontier markets, as well as various factors including the increased potential for extreme price volatility, illiquidity, trade barriers and exchange controls, the risks associated with emerging markets are magnified in frontier markets. To the extent a strategy focuses on particular countries, regions, industries, sectors or types of investment from time to time, it may be subject to greater risks of adverse developments in such areas of focus than a strategy that invests in a wider variety of countries, regions, industries, sectors or investments.

For actively managed ETFs, there is no guarantee that the manager’s investment decisions will produce the desired results.

ETFs trade like stocks, fluctuate in market value, and may trade above or below the ETF’s net asset value. Brokerage commissions and ETF expenses will reduce returns. ETF shares may be bought or sold throughout the day at their market price on the exchange on which they are listed. However, there can be no guarantee that an active trading market for ETF shares will be developed or maintained or that their listing will continue or remain unchanged. While the shares of ETFs are tradable on secondary markets, they may not readily trade in all market conditions and may trade at significant discounts in periods of market stress.

Tim Tszyu vs Terrell Gausha fight, when is it?, how to watch, U.S. debut, preview, title, updates, reaction

Netflix customers mad over plan to charge for password sharing

Netflix customers mad over plan to charge for password sharing