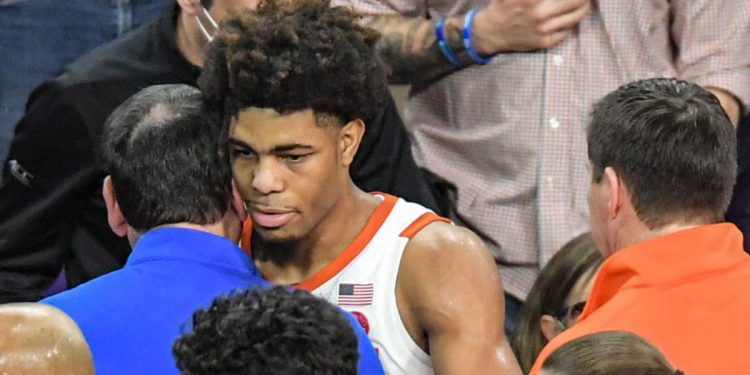 Clemson found itself without one of its guards after David Collins was ejected late in the first half after a dangerous flagrant foul against Duke’s Wendell Moore Jr.

The Blue Devil stripped the Tiger, powering away for a breakaway dunk as Collins undercut him while Moore Jr. was on the rim. The forward became airborne, landing hard on the ground. After being evaluated, the Blue Devil was allowed to stay in the game.

Duke coach Mike Krzyzewski raced to the opponent’s baseline to check on Moore Jr, saying after the game, “He didn’t see himself. We saw him. He was parallel to the ground, eight feet up in the air. That was one of the most dangerous plays I’ve ever seen, and I’m not knocking Collins, but I’ve never seen a player look like that before.”

Before Collins left the court, he and Clemson coach Brad Brownell went over to Krzyzewski, and the Tigers player and the Duke coach embraced. Collins offered his side of the story after the game, apologizing and wishing Moore Jr. a healthy season.

“I was going to try to block it from behind but I was going too fast and I couldn’t stop,” Collins said in his Instagram story after the game. “I realized I needed to stop when it was too late. I never have been a dirty player, never will I. I wish bro a healthy season and I never tried to hurt anybody, but I know everyone is entitled to their own opinion. I have respect towards Duke and Clemson and I apologize to everybody for a reckless play. I’m glad Wendell is okay.”