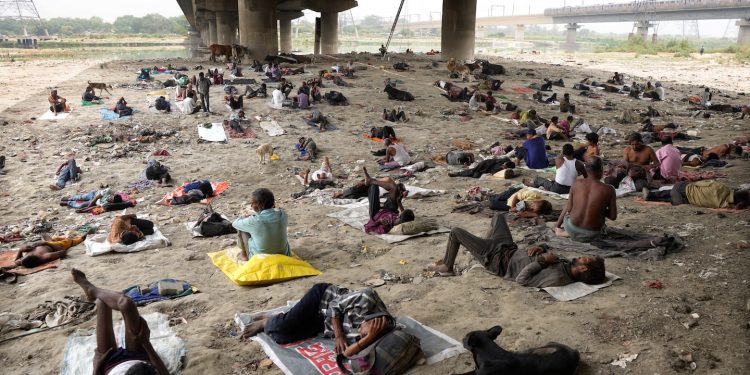 The punishing heat experienced by India and Pakistan in March and April was the most intense, widespread and persistent in the region’s history. A study released Monday finds that human-caused climate change had made this historic event at least 30 times as likely. It determined that climate change elevated temperatures by about 1.8 degrees Fahrenheit (one degree Celsius).

“What was particularly exceptional and particularly unusual was how early it started,” Friederike Otto, co-author of the study, said in a news conference on Monday.

India experienced its highest March temperatures in 122 years, and Pakistan and northwestern and central India endured their hottest April. Numerous all-time and monthly temperature records were broken across both countries. Over the two months, extreme heat affected nearly 70 percent of India and 30 percent of Pakistan.

This heat event would have been “highly, highly unlikely” in a world without climate change, said Arpita Mondal, a co-author and professor at the Indian Institute of Technology Bombay.

The heat took an enormous toll on people throughout the region. Workers were no longer able to work full days outside, putting a strain on their livelihoods and the economy. Key farming areas in India are expected to see a 10 to 35 percent decrease in crop yields due to the heat wave, driving up local market prices and reducing global wheat supplies at a time when supplies are already under stress because of Russia’s invasion of Ukraine. Hundreds of forest fires also burned across India. In Pakistan, snowmelt caused a glacial lake to flood and wipe out a key bridge.

Across the two countries, at least 90 deaths have been tied to the heat.

The analysis was conducted by the group World Weather Attribution, which uses computer modeling to investigate the links between ongoing weather events and climate change. The team ran simulations using 20 different models with and without the effects of human-induced climate change to determine the effect of rising temperatures on the magnitude of the heat. The results, which are not yet peer-reviewed, come from well-established methodologies that have been used in past analyses, including one conducted on the 2021 Pacific Northwest heat wave.

Otto said that the study’s estimate of climate change’s effect is conservative because of data constraints and that rising temperatures probably increased the likelihood of the event “higher than 30 times.”

The study was released five days after a similar analysis from the British Met Office. It found that a record-warm April and May in northwestern India and Pakistan has become about 100 times as likely because of climate change. Otto said the Met Office’s estimation is well within the range of uncertainty of the latest study.

“Both show that climate change is a real game changer when it comes to these kind of heat waves,” Otto said. “The main message to take away here [is] that adaptation to heat has been the absolute essential thing to do in life in every part of the world, really, but especially also in this part of the world.”

The World Weather Attribution study also examined how likely a heat wave similar to this year’s would occur in an even warmer world. The team found that such a heat wave would become two to 20 times as likely if the planet reaches 3.6 degrees (two degrees Celsius) above preindustrial levels.

India has warmed about 1.8 degrees (one degree Celsius) since the preindustrial era. Pakistan has warmed 2.2 degrees (1.2 degrees Celsius).

The study adds to growing research that underlines how climate change is increasing extreme weather events across the world. According to the climate report released by the United Nations last year, evidence shows that heat waves have increased across almost all land areas because of climate change.

“We have studied many heat waves, and in all cases but one climate change was clearly assessed as the main driver of the change in the likelihood,” said Robert Vautard, director of the Pierre-Simon Laplace Institute in France and co-author of several studies with World Weather Attribution.

Northern India and Pakistan face another round of heat later this week. After some relatively cool weather the next several days, temperatures are forecast to rise several degrees above average Friday into the weekend.

Aid groups said that, in...

Used-car retailer Carvana to lay off 2,500 in post-Covid slide