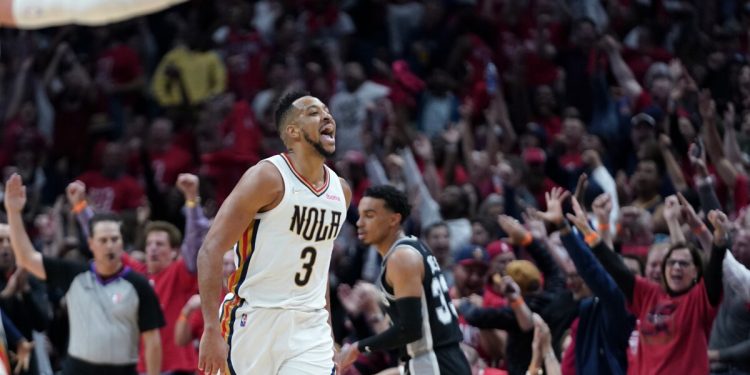 
Play-in, part two: The Clippers are hosting New Orleans with a playoff berth on the line.

The winner in the matchup Friday, at 7 p.m. in Crypto.com Arena, will earn the Western Conference’s eighth and final playoff spot and a first-round series against top-seeded Phoenix. That series starts Sunday.

But before either can get to a seven-game series beginning in Arizona, they have one game to extend their respective seasons. The Clippers are here because they lost Tuesday’s play-in tournament game between the West’s seventh- and eight-place teams in Minnesota. The Pelicans beat San Antonio on Wednesday night in the play-in tournament’s nine-10 game, led by C.J. McCollum’s 32 points and 25 from Brandon Ingram.

New Orleans won the season series 3-1, with the lone loss in the most recent game, a 119-100 Clippers victory on April 3. Though the three earlier games will influence some of what the Clippers will be wary of — limiting Jonas Valanciunas’ three-point shooting, Ingram’s scoring and minimizing rookie star defender Herb Jones on that end — the fourth matchup was most significant because it was the only time these teams played after their rosters changed considerably following February’s trade deadline.

For the Clippers, that means containing McCollum, acquired in a trade with Portland. McCollum made just seven of his 18 shots in the early April loss and got to the free-throw line four times. Though he scored 19 points, the Pelicans were outscored by 21 points in his 37 minutes thanks to Clippers reserves, whose defense in the second quarter broke the game open. The Clippers also held Brandon Ingram to three-of-11 shooting while Valanciunas — after making 12 of his 17 three-pointers during two games in November – didn’t get off a single three-pointer.

Whereas McCollum played more often off the ball in Portland he’s taken on a lead guard role with New Orleans, his usage rating rising from 26% to 29%, and his assist percentage increasing from 22% to 31% after the deal.

The Pelicans won’t have faced the Clippers with one of their top scorers in the lineup: Norman Powell. Powell, another former Trail Blazer offloaded, along with Robert Covington, at the trade deadline was still yet to return from a fracture in a foot bone during the April 3 Clippers victory. That shouldn’t throw a major wrench into New Orleans’ preparation, however, because Powell played New Orleans in November with Portland, and the Trail Blazers and Clippers overlap significantly in what they run, and how, because of relationships between the coaching staffs.