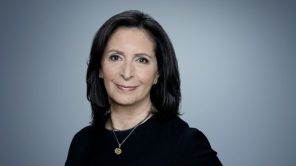 
Julia Child knew her way around a sauce the way Leonard Bernstein knew his way around a sympathy, the way Patrick Mahomes knows his way through a defense. That is to say, with panache.

The renowned cookbook author and pioneering TV personality is the subject of the documentary Julia, directed by Betsy West and Julie Cohen, which is in contention for an Oscar nomination.

“Julie and I both grew up in a time of frozen food, weird Jell-O salads, mushroom soup casserole, and Julia changed all of that,” West tells Deadline. “Julia’s the reason why cooking shows are so incredibly popular, why Americans are much more adventuresome in the kind of food they eat. Julia introduced us to French food, but it just took off from there and America is a very different place after Julia.”

The documentary marks the second collaboration between the directors and CNN Films, the division of the news network overseen by Amy Entelis, EVP for talent and content development for CNN Worldwide, and Courtney Sexton, SVP CNN Films. The quartet first worked together on the massive hit RBG, the 2018 documentary about the late Supreme Court justice, which won an Emmy and earned an Oscar nomination. An upcoming third collaboration between Cohen, West and CNN Films has just been announced – Gabby Giffords Won’t Back Down – about the former U.S. Representative from Arizona who was nearly killed in a 2011 assassination attempt.

“They’ve done a great job of taking on strong female characters,” Sexton observes of the filmmakers, adding that with Julia, “They also had a really interesting idea on how to attack the food aspect of it and make it feel elevated and cinematic. And when they pitched this idea of the macro food cinematography, alongside this compelling story, we were immediately taken.”

From experience, Sexton and Entelis have gained an understanding of what viewers look for in a documentary from CNN Films.

“Our audience responds to people’s life stories when they are told as well as Betsy and Julie can do it,” Entelis notes, “and when they think that they know something about a subject, but in fact we take them much deeper and we can really reveal things that are not necessarily out in the world.”

Julia, for instance, delves into Child’s World War II experience in the OSS, the precursor to the CIA, and her privileged upbringing. Working with the estate, the filmmakers gained access to home movies of Child (née McWilliams) growing up in Pasadena, California.

“That goes to the point about showing the audience something they wouldn’t have access to,” Entelis says. “That was really wonderful footage and really emphasizes this notion of [Child] being a trailblazer… Her family wanted to marry her off to the son of the Chandler family, the L.A. Times family. And you think, ‘Oh my God, she just like bolted out of there, she really did something against the grain. And not only did something against the grain, she rose to the highest heights of the field that she chose.”

Before the launch of CNN Films in 2012, virtually every minute of programming on CNN had been produced in house. The division under Entelis and Sexton is different, because it works with filmmakers and production entities from outside the network. Julia was developed in conjunction with the documentary unit of Imagine, the entertainment company founded by Ron Howard and Brian Grazer.

Documentaries from CNN Films, however, are not exempt from CNN’s rigorous vetting procedures, which apply to all news pieces as well. A unit called Standards & Practices scrutinizes the content of nonfiction films like Julia.

“It’s a whole extra layer that we have to navigate,” Sexton concedes. “But at the end of the day, they also protect us and I feel grateful for that, even though sometimes we have some struggles because we are a news network… They’ve grown a lot with us as we’ve honed in on how to operate within a news environment. We’re outliers.”

CNN Films may find itself in Oscar contention again next year with Navalny, a documentary about the Russian opposition leader and anti-corruption crusader Alexsei Navalny that was a late addition to the Sundance Film Festival. On Friday, the film by Daniel Roher won both the audience award for U.S. documentary and the “festival favorite” award, chosen from among all of the Sundance features, fiction and nonfiction.

“When the filmmakers came to us, they had just secured access to Navalny and there was no pitch deck, no footage. It was just, ‘Hey, we got this access, would you would you want to take the ride with us?’” Sexton explains. “[CNN correspondent] Clarissa Ward has done most of the best reporting on the subject of him already. So, for us to be able to extend that story in a deeper fashion… it felt like a natural sort of extension of the amazing work Clarissa’s already done.”

Entelis and Sexton are also busy developing and acquiring content for CNN Plus, the network’s streaming service that is expected to debut around March.

“We have a film we’ve just announced for [CNN Plus] called The Last Movie Stars, which is directed by Ethan Hawke, the story of the lives, careers, marriage and philanthropy of Paul Newman and Joanne Woodward,” Entelis says. “It’s a very, very unique project for us. It’s a film of multiple chapters, so it’s a very extensive project. It’s going to launch on the streaming service, which will also have original CNN Films that have not aired on the network.”

In the meantime, there is the matter of the Oscar nominations. Julia is one of 15 films still in the running for Best Documentary Feature. A nomination would be “the icing on the cake,” Sexton says. “We’re excited either way.”

Adds Entelis, “That would be a dream come true, and it would be wonderful, and the time we spent doing that the last time [with RBG], I mean, pinch me, that was an incredible experience to sort of be the final episode of the saga of getting that film out in the world and seeing the incredible reaction to it… Making Julia, collaborating with Betsy and Julie and Imagine, it’s just a wonderful experience and we do it for the joy of bringing a story like that to the viewer. But if it gets to that other place where we are in contention, I’m there, I’m all in.”

Pepi could solve USMNT’s striker conundrum, but getting Pulisic back on track is just as vital

Pepi could solve USMNT's striker conundrum, but getting Pulisic back on track is just as vital