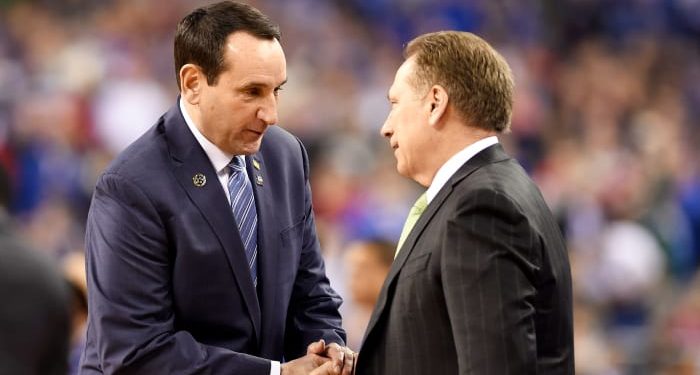 
There are a lot of ways to describe the final matchup between Mike Krzyzewski and Tom Izzo. Two Hall of Fame coaches. Two national-championship winners. Two good friends. But maybe the simplest way to understand what separates the coaches from even the best of their peers is to start here:

Duke and Michigan State have not looked outside of their own campuses for a coach in 40 years. Kansas has. Kentucky does it with almost every hire. UCLA does it all the time. Even North Carolina, which believes it has the best family atmosphere in college basketball, has done it twice (though both times, UNC hired alums).

But Duke hired Krzyzewski in 1980. Michigan State promoted Izzo to replace his mentor Jud Heathcote in 1995. The two have maintained—and benefited from—stability in an extremely volatile sport, creating a cycle of success that is self-perpetuating. Private Duke touts its Brotherhood; public Michigan State loves its Spartan Dawgs. The effect is the same.

To players at Duke and MSU, the coach is the school. This gives Krzyzewski and Izzo credibility in recruiting, authority during rigorous practices and trust in the final minutes of a tight NCAA tournament game. It all rests on an understanding that serves the subfloor for both programs: For decades, players who put their faith in these two coaches were ultimately happy that they did. So many coaches talk about wanting to give their players a great collegiate experience, and a lot of them even mean it, but it’s hard when the coach is one season from either getting fired or jumping to a better job.

They have both evolved from scrappy underdogs—Krzyzewski trying to catch up to Dean Smith, Izzo bristling under Michigan’s shadow—and they know it, too.

“We have two of the best programs in sport, not just in basketball,” Krzyzewski said in 2019, after beating Izzo’s Spartans in East Lansing. “We have it because of the values and the standards, the principles that he evokes and we do too. And it started with Jud [Heathcote], too. I mean, Michigan State is the crème de la crème and we are too. There’s not one. When you are that, you have ultimate respect for the guy leading the other group. …. Their former players are like our former players. They feel like they are part of a family. When you have that continuity, then those players come back and there’s family. Not many programs—hardly any programs have that. They do and we do.”

Izzo would never speak like that. One of his biggest fears in life is having anybody in his little Upper Peninsula hometown of Iron Mountain thinking he has gotten too full of himself. But he knows what Krzyzewski said is true, and that knowledge has comforted him at this stage of his career.

After Michigan State’s first three Final Fours, consecutively from 1999 to 2001, Izzo alternately chafed whenever somebody said his program was falling off and worried when it looked like it was. In recent years, as he kept winning, Izzo has grown more secure in his standing. Losses still bother him but don’t consume him in the same way. Cheating coaches still piss him off but don’t hit the same nerve. In conversations, he seems far more worried about the future of college basketball than of his program.

One of the greatest compliments Izzo’s program has received is on display every November. The Champions Classic features four teams: Kansas, Kentucky, Duke, and Michigan State. When Izzo became head coach, it would have been ridiculous to group Michigan State with those other three. In the last decade, nobody has thought twice about it.

And yet, Krzyzewski has gotten Duke to a place even Michigan State hasn’t reached. He is 12–3 against Izzo. (Izzo joked this weekend that “I’ve gotta be his favorite coach because he’s beaten us like a drum.”) There was a time this would have made Izzo angry; now he sees it in the proper context. Duke usually beats Michigan State because Duke usually beats everybody. Duke almost always has more talent than Michigan State. It’s not an indictment of Izzo or his program. In any matchup of great coaches, the team with better players usually wins.

As they gear up to meet Sunday in the NCAA tournament second round, Duke has better players, again. What Michigan State has is a foundation, a culture of relentlessness, and a coaching staff that is great at finding subtle strategic advantages, especially this time of year. Izzo surely knows what he is up against: Not just Paolo Banchero and Wendell Moore and AJ Griffin and Mark Williams, but a culture that runs as deep as Michigan State’s, a coach who still stays up late watching film, and a staff that also excels at finding subtle strategic advantages.

This weekend, Izzo gave Krzyzewski’s program the greatest compliment Izzo can give anyone, the one he always hopes applies to himself: “It’s been earned,” Izzo said. “It’s not been given. It’s been earned.”