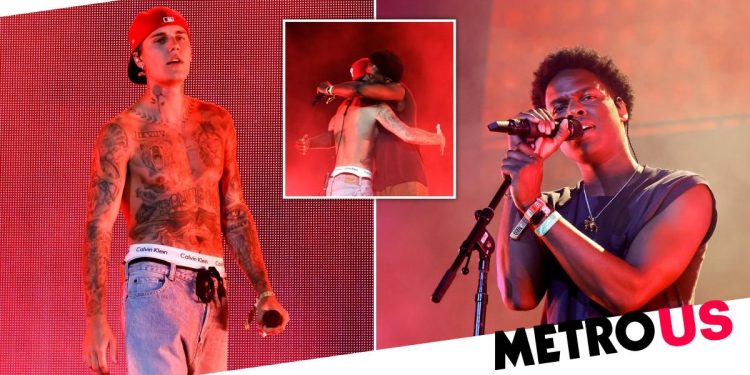 The first day of Coachella 2022 kicked off with a spectacular surprise, as Justin Bieber joined Daniel Caesar on stage to the amazement of the screaming crowd.

Ahead of the start of the music festival, there were rumours that Justin might make an appearance, as he was travelling across the US between locations for his Justice World Tour.

That speculation was confirmed on Friday evening, when the 28-year-old arrived on stage shirtless while wearing a pair of baggy jeans and a backwards-facing red cap.

Attendees screamed in shock when the Grammy Award-winner showed up, with numerous people raising their phones aloft to capture the moment, which came as Coachella returned following a three-year hiatus.

Justin sang Peaches from his sixth studio album Justice, a track that features Daniel as well as singer-songwriter Giveon.

One person said his performance was ‘the highlight’ of the first day of the festival, with another describing Daniel bringing Justin out as ‘pure gold’.

‘Justin Bieber carried Coachella and he wasn’t even a headliner,’ someone else remarked, while another admitted they had ‘chills’ watching the performance.

Several people called for Coachella to make Justin a headliner at next year’s event, with this year’s headliners being Harry Styles, Billie Eilish, Swedish House Mafia and The Weeknd, after Kanye West pulled out.

One ecstatic fan dubbed Justin the ‘prince of pop’ after watching his performance in a video circulated on social media.

At the end of their performance, Justin and Daniel shared a heartfelt embrace on stage, as the audience cheered with unbridled enthusiasm.

The What Do You Mean? singer then gestured a peace sign at the concert’s attendees before walking off, having made his mark on the opening day of the festival.

When it was announced that The Weeknd had taken Ye’s place at the festival, it was claimed that the musician threatened to back out unless his salary matched the rapper’s, which was reportedly set to be more than $8million (£6m).

However, the singer decided to ignore the speculation in an extremely smooth fashion, taking to Twitter to write: ‘Been off for a bit. What I miss?’


MORE : Backstage at Coachella as the festival prepares for it’s big comeback


MORE : Hailey Bieber lashes out at trolls in scathing TikTok video: ‘Be miserable somewhere else’

Heidi Klum, 48, shares a kiss with husband Tom Kaulitz, 32, as they attend day one of Coachella