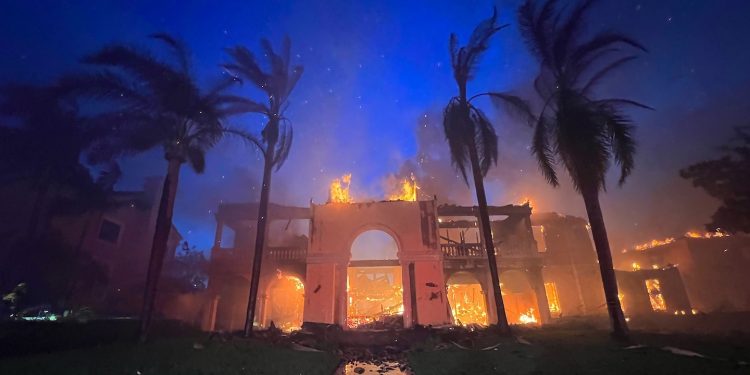 No injuries or deaths had been reported as of Wednesday evening, Orange County Fire Chief Brian Fennessy told reporters at a news conference. The Coastal Fire destroyed or damaged an estimated 20-plus structures, he said. Firefighters were “getting a better handle” on the fire and were expected to make progress overnight, he added. “It’s sad to say we’re kind of getting used to this,” he said.

Laguna Niguel is an affluent coastal city about 50 miles from Los Angeles. Some of the threatened and damaged homes were in an area with multimillion-dollar mansions.

Wildfire activity has been increasing in California, according to official tallies. Out of the state’s 20 largest wildfires, in terms of the number of acres affected, nine have occurred in 2020 and 2021. Three of the five deadliest wildfires have erupted since 2017.

The state is in its third year of severe drought. Major reservoirs are depleted, while the Colorado River, an important water source for Southern California, is experiencing a megadrought, intensified by climate change, that is the worst in 1,200 years, The Washington Post’s Capital Weather Gang reported.

Fennessy said the recent dry spells had made it easier for wildfires to spread more quickly than in the past. The “moisture is so low that those fires are taking off and running,” he said. The recent fires are not necessarily burning thousands of acres, but the swifter pace of the fires is increasing the danger posed to buildings and people, he said.

The Laguna Niguel fire was the result of a combination of strong winds, dry vegetation and the steep slope of the area where the fire was first detected, Fennessy said.

First responders reported a wildfire about 3 p.m. local time. Citizens near Coronado Pointe Drive, Vista Court and Via Las Rosas were put under mandatory evacuation orders, which were later expanded to cover other areas north of the intersection of Pacific Island Drive and Flying Cloud Drive. Laguna Niguel Mayor Elaine Gennawey told reporters that an evacuation center had been set up, where 25 adults, two children and five pets had sought shelter.

The fire posed no immediate threat to the neighboring city of Laguna Beach, officials said. Residents of the Balboa Nyes neighborhood were temporarily put under voluntary evacuation orders before they were lifted later in the evening.