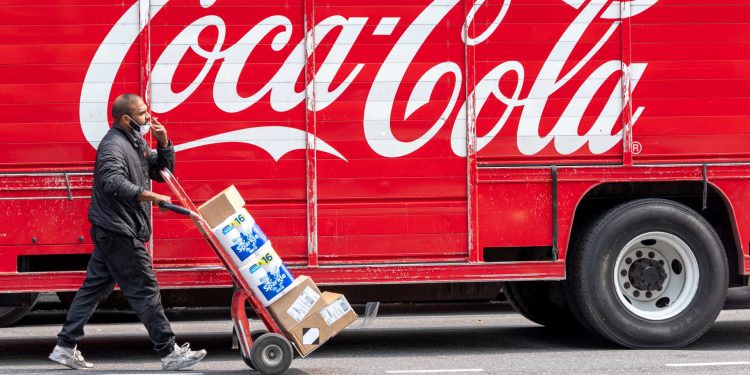 But CEO James Quincey told CNBC’s Sara Eisen that despite the strong quarter, there are “storm clouds” on the horizon. The company largely weathered inflationary challenges during the first quarter and maintained its outlook.

Here’s what the company reported compared with what Wall Street was expecting, based on a survey of analysts by Refinitiv:

Net sales rose 16% to $10.5 billion, topping Wall Street’s expectations of $9.83 billion. Organic revenue, which strips out the impact of acquisitions and divestitures, climbed 18% in the quarter.

Pricing and mix grew 7% in the quarter, helped by strategies like bottling its drinks in smaller packaging. As inflation puts pressure on Coke’s profit margins and shoppers’ wallets, the company said it’s been expanding its lineup of single-serving offerings at “affordable” prices.

Coke’s unit case volume rose 8% during the quarter. The company posted double-digit volume growth in both its nutrition, juice, dairy and plant-based beverages segment and its hydration, sports, coffee and tea segment. The company’s sparkling soft drink unit saw its volume increase 7%, fueled by demand for its namesake soda and its zero sugar version.

In early March, Coke paused operations in Russia, citing the Kremlin’s invasion of Ukraine. The company said Monday that the decision is expected to dent unit case volume by 1% and revenue and operating income by 1% to 2%. Coke also estimates that the decision will weaken its comparable earnings by 4 cents per share.

Despite the suspension of its Russian business, the company reiterated its full-year outlook of revenue growth of 7% to 8% and comparable earnings per share growth of 5% to 6%. For the second quarter, Coke is expecting a 4% headwind due to foreign currency.

This is breaking news. Please check back for updates.