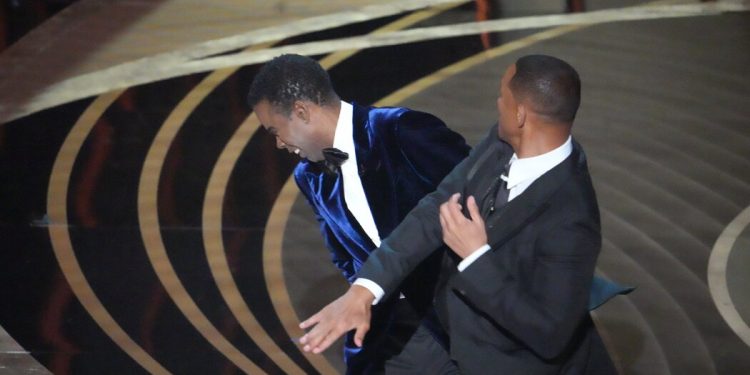 Notably, the Russian invasion of Ukraine was not mentioned during the opening to the lighthearted show, which featured a D.J., a second standup routine from Schumer, and a sketch from Hall that found a shirtless Chalamet and other male stars onstage. Three sports stars — Tony Hawk, Kelly Slater and Shaun White — arrived to introduce a montage celebrating 60 years of the James Bond franchise. (The academy finally acknowledged the war in Ukraine with a moment of silence after Reba McEntire’s performance of a nominated song, “Somehow You Do,” and by flashing the hashtag #StandWithUkraine on the screen.)

In a startling break from academy custom, the telecast was used as an overt promo for some coming movies. Chris Evans introduced a commercial for “Lightyear,” a coming “Toy Story” prequel from Pixar that will arrive exclusively in theaters in June. A lengthy pretaped promotion for the academy’s new museum in Los Angeles featured Sykes taking a tour.

Last year, the television audience for the Academy Awards dropped so precipitously (down 60 percent from 2020, already a record low) that organizers decided to rework the live broadcast. The presentation of Oscars in eight categories — the less-starry ones — was moved to a nontelevised portion, with the academy saying it would record the acceptance speeches and integrate edited bits into the main show. Cue howls of dismay, both from movie fans and from the sidelined artists.

But the academy stood firm. “Dune,” which was nominated in 10 categories in total, won the Oscars for best sound, score, production design and editing during what the academy had branded “the Golden Hour” in an attempt to assuage bruised egos. Hans Zimmer, who wrote the “Dune” score, was not on hand to accept the Oscar, the second of his career after “The Lion King” (1989), with a presenter explaining that he was away on tour.

The team behind Chastain’s transformation into a televangelist with tarantula eyelashes in “The Eyes of Tammy Faye” won the Oscar for makeup and hairstyling. Chastain embraced the group from her seat in the front row. (The celebrity quotient during the nontelevised portion of the ceremony grew as the hour went on, with seat fillers on heavy rotation.)

The short-film winners were “The Windshield Wiper,” the animated story of a man contemplating love in a cafe while smoking a pack of cigarettes; “The Long Goodbye,” a violent live-action short starring and co-written by Riz Ahmed that takes place in the lead-up to a wedding; and “Queen of Basketball,” a 22-minute New York Times documentary about Lusia Harris, the first and only woman ever officially drafted into the N.B.A.

Woman Fights Off Bobcat As It Unexpectedly Attacks Her Dog

Woman Fights Off Bobcat As It Unexpectedly Attacks Her Dog