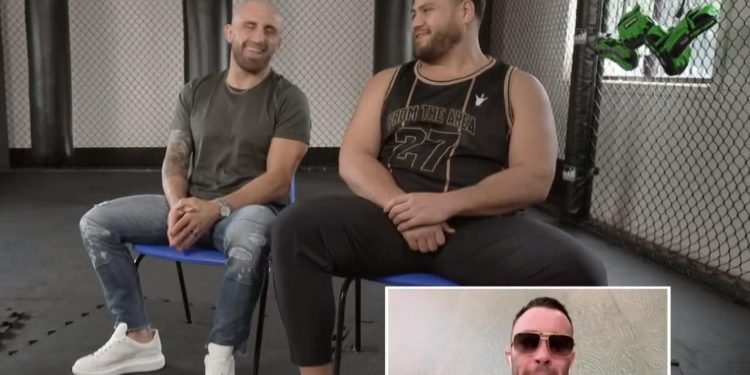 
Tai Tuivasa wants to see Colby Covington cop a beating at UFC 272 this weekend, and he’s likely not alone.

“I hope Colby gets his head caved,” the No.3-ranked heavyweight star said.

“Nup. Not a fan of rats … I was there when he dobbed on what’s his name in Sydney. Called the police.”

Tuivasa was referring to an infamous incident at a Sydney hotel back in 2017. Covington was accused of calling the police after an altercation with fellow fighter Fabricio Werdum in which the Brazilian threw a boomerang.

Werdum claimed Covington racially insulted him and attacked him first. Werdum was charged with common assault and eventually fined $600.

Both Tuivasa and Volkanovski took exception with how Covington acted on camera and off it, suggesting a lot of his persona was an act.

Volkanovski added: “The way he was going about (the boomerang incident) too. That’s the thing with him, even with this whole Masvidal thing, how it all started.

“Obviously they were friends and what happened there? Was it just part of his persona this new acting thing he’s doing, selling his boy out like that you know?

“… Obviously it puts a lot of bad taste in people’s mouths. You can see why people are hoping for Masivdal to put a beating on Colby, but whether that happens is another story.

“I think Colby is a bad matchup for Masivdal but a good flying knee to stiffen Colby like a board would be good to see.”

Covington was shown video of the Aussie stars’ comments but wrote them off as “irrelevant”, despite Volkanovski being the reigning featherweight champion and Tuivasa an emerging contender for the heavyweight title.

“Two irrelevant fighters trying to go off one of the biggest names in the sport right now,” Covington told Fight Week.

“Their fighting doesn’t get attention in the MMA world so of course they want to use my name to try and get some headlines.

“…I didn’t call the cops. I love that everybody lies about me because I’m the ‘bad guy … we were at a hotel lobby so of course it was the hotel calling the cops on them, it wasn’t me.”

Sean Hannity suggests Vladimir Putin should be assassinated: ‘Cut the head of the snake off and you kill the snake’