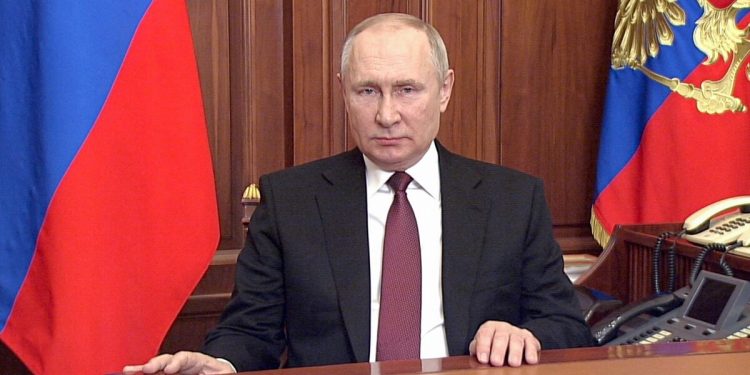 No matter how Vladimir Putin’s invasion of Ukraine ends, it already marks a turning point in history: the end of a 30-year period of relative peace in Europe and a return to hostility between Russia and its neighbors — a kind of Cold War 2.0.

The first Cold War, from 1947 until 1991, divided the world between two hostile blocs. The United States and the Soviet Union reached the brink of nuclear war at least three times, most famously in the 1962 Cuban Missile Crisis, then negotiated a series of agreements to reduce the risk of conflict. Eventually the Soviet Union, burdened by a sclerotic economy, simply collapsed.

Three decades later, that thumbnail history may sound oddly comforting: All’s well that ends well. But living through the Cold War, complete with bomb shelters and nuclear attack drills, was anything but comfortable.

The world is different now. Russia is smaller and arguably weaker than the Soviet Union; the North Atlantic Treaty Organization, the U.S.-led alliance, is larger.

But that doesn’t mean the outcome is predictable.

“This is a new situation,” warned John Lewis Gaddis of Yale, the dean of American Cold War historians. “This is not a cold war; this is a hot war — and it directly involves one of the great powers.”

In response to Russia’s invasion of Ukraine, the United States and its allies have quickly assembled an updated version of the Cold War strategy of “containment” — countermeasures to deter Moscow from further aggression.

They have imposed economic sanctions to punish Putin and his oligarchs, deployed troops to bolster Poland and other NATO countries on Russia’s western border, and stepped up military aid to Ukraine.

It’s not clear how effective those measures will be — and all of them could prompt retaliation from Putin.

Take economic sanctions. The United States and its allies have blocked most Russian banks from doing business in the West and imposed new controls on technology sales.

Unlike Cold War 1.0, however, the West is vulnerable to Russian economic retaliation. Putin can reduce his exports of natural gas, one of Europe’s main sources of heating fuel. He can launch cyberattacks on the United States and elsewhere.

NATO’s military reinforcements will likely draw Putin’s anger as well. One of his principal complaints about the way the first Cold War ended is that it allowed NATO to eventually add 14 countries that the Soviet Union considered part of its strategic buffer zone.

“Putin’s reckless behavior leaves the U.S. and its allies no choice but to augment the defenses on NATO’s eastern flank,” Charles A. Kupchan, a former National Security Council aide in the Obama administration, told me. “The Russians are not going to like that and will respond in kind.”

Western aid to Ukrainian forces could be a trigger as well, whether it’s overt help to Ukraine’s government or covert aid to resistance fighters.

“I’m guessing that this will happen — military, economic and material support to Ukrainians resisting a Russian occupation,” Kupchan said.

Putin has already intimated that he reserves the right to use nuclear weapons if he feels threatened by foreign powers — a startling escalation of rhetoric.

“Whoever tries to hinder us, and even more to create threats to our country and our people, should know that Russia’s response will be immediate — and it will lead you to such consequences that you have never encountered in your history,” he said in his speech last week announcing the invasion.

During most of the 20th century Cold War, China was a poor country, a relatively minor player economically and militarily.

Now it’s an economic superpower and Russia’s most important ally.

Fifty years ago this week, President Richard Nixon wooed China away from its alliance with the Soviet Union. Kupchan argues that President Biden should try to do likewise now.

“China has seen Russia as an important ally in pushing back against the West,” Kupchan said. “But the Chinese, unlike Putin, do not like disruption. They see Putin turning everything upside down, and they’re not sure that’s a good idea.… It’s in the interest of the United States to take advantage of that.”

Cold War 1.0 lasted almost half a century. It was expensive and painful. Millions of people died in proxy wars in Korea, Vietnam, Afghanistan and elsewhere. But the antagonists avoided a third world war.

There’s a lesson in that experience for Cold War 2.0:

Even as the United States and its allies act against Putin, they need diplomacy, too — to reduce the risk that this Cold War will be more costly than the first.

Is Blockchain Replacing the SIM Card?

Love is Blind: Which couples from season 2 are still together?

Love is Blind: Which couples from season 2 are still together?