With help from John Hendel

— NTIA zeroes in on privacy: President Joe Biden has so far done comparatively little on privacy, but discussions kicking off today at the Commerce Department could reveal more about his administration’s approach.

— ‘Zombie’ votes get a thumbs up: FTC Chair Lina Khan is defending votes cast by a former FTC commissioner as he was heading out the door.

— Up for debate today at the FCC: How should the government vet the claims that telecom companies make as they vie for federal subsidies to help get schools and libraries connected?

HI, AGAIN, ON THIS CHILLY TUESDAY, DEC. 14. WELCOME TO MORNING TECH! Alexandra Levine here, back at the helm of MT for a few days as we await a new newsletter writer. (Do you know someone? We’re hiring.) Since I was last in your inbox, I’ve been covering privacy, data protection and online safety issues for POLITICO.

A message from Comcast:

We’ve created a network with one simple purpose: to keep customers connected. In the last 10 years, Comcast has invested $30 Billion – and $15 billion since 2017 alone – to keep America’s largest gig-speed broadband network fast, secure, and safe. Because more Americans rely on Comcast to stay connected, we work around the clock to build a better network every single day. Learn how the network keeps you connected.

BIDEN’S NTIA PUTS PRIVACY UNDER THE MICROSCOPE — The Commerce Department’s National Telecommunications and Information Administration is today kicking off a series of meetings on privacy and civil rights issues.

— NTIA handles privacy now? Huh? Remember that the Commerce Department, including NTIA, led the Obama administration’s work on privacy: the Obama White House put out a consumer privacy “bill of rights,” for example, and enlisted Commerce to see it through. President Donald Trump’s NTIA also tried to tackle privacy, collecting comments on the administration’s approach to the issue, but that effort effectively crashed and burned when David Redl resigned as NTIA head in 2019. Now, even as Congress has continued to struggle to pass a national privacy law, Biden’s White House so far has publicly backed only an FTC effort to write privacy and data collection rules.

Some privacy experts believe involvement from Commerce could help move things along. “We expect the sessions will be followed up by the administration’s first formal call for legislation and perhaps efforts to break the congressional logjam,” Jules Polonetsky, CEO of the Future of Privacy Forum, told MT, adding that it’s imperative the NTIA sessions lay the groundwork for federal privacy legislation with strong civil rights and equity protections.

But others are wary that this may be too little, too late. ”The Biden administration understandably has not had a lot of bandwidth to focus on privacy,” said Cam Kerry, a former general counsel for Obama’s Commerce Department who led that administration’s development of its privacy bill of rights. “It’s good that NTIA is engaging at long last, but it is getting late to have an impact when it can during this Congress.”

— What’s on tap today: NTIA’s three open “listening sessions” will examine tech and internet-related issues at the intersection of privacy, equity and civil rights, and they’ll form the basis for a report on how commercial use of personal data can disproportionately harm underserved communities. The meetings are likely to explore the potential for that data to fuel problems like discrimination in online advertising, bias in AI software and workplace surveillance, among other topics.

“Entrenched disparities persist in the digital economy, and the collection, processing, sharing, and use of data can directly affect — both positively and negatively — structural inequities present in our society,” the department said in a memo announcing the listening sessions. Today’s speakers include Kristen Clarke, the Justice Department’s assistant attorney general for civil rights, and FTC commissioner Rebecca Slaughter.

— Related, for your radar: Senate Commerce will on Wednesday consider the nomination of Alan Davidson to be the Commerce Department’s assistant secretary of Commerce for communications and information.

FTC CHAIR SAYS ‘ZOMBIE’ VOTES ARE A-OK — FTC Chair Lina Khan is defending rules allowing so-called zombie votes, by which votes from FTC commissioners who leave the agency can count towards the commission’s current proceedings, even after said commissioners depart.

The practice came to light recently after reporting by my colleague Leah Nylen revealed that as many as 20 votes from former Democratic Commissioner Rohit Chopra remained active, even after he left to become head of Biden’s Consumer Financial Protection Bureau. Chopra’s votes could be key to the FTC being able to push through Democrats’ progressive priorities at a time when Democratic and Republican members would otherwise be stalemated 2-2 on votes. Republicans have criticized the practice as unfair political maneuvering, but Khan argues that under longstanding FTC rules, it’s fair game.

— Khan’s defense: Khan responded to one of her fiercest critics, Sen. Mike Lee (R-Utah), the top Republican on Senate Judiciary’s antitrust panel, with a history lesson about a 1984 policy under which “the votes of a departing Commissioner always count, except in instances where they are displaced by the votes of his or her successor.” In a letter obtained by POLITICO, she called Lee’s qualms “misunderstandings,” citing examples of the same procedure being used at least half a dozen times before. Khan emphasized that the departing commissioner must cast his or her votes before leaving the agency, which she said Chopra did. Besides, she wrote, some of his votes were on motions that failed in the end, and others were on uncontroversial items that the commission approved unanimously.

— Reading between the lines: Khan didn’t confirm how many votes Chopra made before he left, but said five of them have become public and two more will soon. Of those seven, five were unanimous. Chopra’s was the deciding vote in only two cases: a merger policy statement issued on Oct. 25 and the FTC’s fiscal 2021 annual financial report issued on Nov. 15. The FTC’s GOP commissioners issued stern dissents on the October policy statement but not on the November financial report.

TODAY: FCC CONSIDERS TWEAKS TO SCHOOL SUBSIDY PROGRAM — One item to watch at today’s FCC open meeting will be a plan from Chair Jessica Rosenworcel to add a “bidding portal” for telecom companies’ bids made as part of participating in the E-Rate program, which subsidizes broadband connectivity for schools and libraries.

— The concern: Organizations including the State E-Rate Coordinators’ Alliance and the American Library Association questioned whether creating such a portal would really safeguard the program’s integrity and complained it would add “overly burdensome” requirements for service providers and applicants. California’s K-12 High Speed Network raised similar objections.

We’ll listen for word of potential tweaks revealed in today’s commissioner discussion. Rosenworcel is particularly close with education groups, given her longtime focus on the digital “homework gap.”

— Looking ahead: This E-Rate debate is playing out while the FCC is adding more digitally-focused programs to its offerings, which presently include E-Rate and Lifeline, a subsidy program aimed at connecting low-income households. Congress already guaranteed many billions more for its Lifeline successor, the low-income internet subsidy program known as the Emergency Broadband Benefit (soon to become the Affordable Connectivity Program). Democrats are also hoping to add more money to the E-Rate successor, known as the Emergency Connectivity Fund, as part of their partisan social spending bill.

Republicans, however, caution of potential for wrongdoing: Top House and Senate Commerce GOP lawmakers fired off a set of questions to Rosenworcel Monday asking about Emergency Broadband Benefit fraud recently alleged by the agency inspector general. They expressed fear about future fraud as the program evolves.

EYEBALLS WATCHING EMOJI: PELOTON RIDES TO THE HILL — Peloton’s top brass are headed to Capitol Hill today to meet with the bipartisan Problem Solvers Caucus. Founder and CEO John Foley and co-founder and chief legal and culture officer Hisao Kushi are angling to talk to members about tech innovation in the fitness space, supply chain disruptions and how microchip shortages are affecting the health and wellness industry. 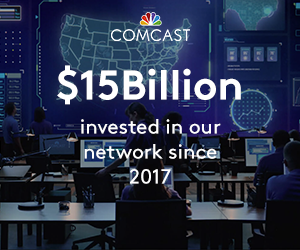 Stephen Neal, chair emeritus and senior counsel of the law firm Cooley and chair of the Hewlett Foundation, has joined the Facebook Oversight Board as a trustee. … Ari Ezra Waldman, Anna Lysyanskaya and Roger McNamee will in January join the Electronic Privacy Information Center’s board of directors, and Danielle Lemon will be board chair.

Amie Stepanovich, former executive director of Silicon Flatirons, a center at the University of Colorado, Boulder, will in January join the Future of Privacy Forum as vice president of U.S. policy; Brad Bernthal, an associate professor at the University of Colorado Law School and director of Silicon Flatirons, will become its interim executive director.

The Aspen Tech Policy Hub announced the members of its latest fellowship program. The fellows came from the Chan Zuckerberg Initiative, Google’s Sidewalk Labs, Lyft and Peloton, among other organizations. … Pekka Kostamaa, a former technologist at Teradata, was named vice president of engineering for the graphic analytics platform TigerGraph.

Zach Graves, who until now had been head of policy at Lincoln Network, is moving up to become executive director, as current leader Garrett Johnson becomes chair of the board of directors. Grace Meyer will move up from head of development to COO. (h/t POLITICO Playbook)

Meta shareholders demand change: Shareholders in Facebook’s parent company are calling for governance changes, including installing an independent chair and allowing corporate board oversight of some content issues, WSJ reports.

Who was first to the Metaverse punch? An artist whose Instagram handle had long been @metaverse was suspended from the platform days after CEO Mark Zuckerberg unveiled Facebook’s rebranding to Meta and announcement about the metaverse, NYT reports. The company did not say whether the user’s blocking was tied to the corporate rebranding.

Whistleblower woes for Apple: “The Labor Department has opened a whistle-blower investigation into Apple,” NYT reports, “adding to a litany of recent charges made to federal and state agencies about the company by current and former employees.”

A message from Comcast:

In the last 10 years, Comcast has invested $30 Billion – and $15 billion since 2017 alone – to grow and evolve America’s largest gig-speed broadband network, building more route miles and running fiber deeper to customers’ homes to help millions of people stay connected when they need it most.

Learn how the network keeps you connected.

Best Pillows for Stomach, Back, and Side Sleepers: 2022

A robot able to ‘smell’ using a biological sensor

The robot with the biological...