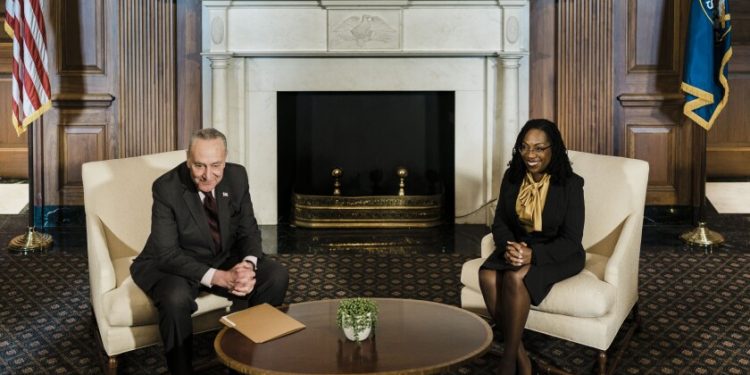 “The hearings will begin on Monday, March 21, with statements from committee members, the individuals who will introduce Judge Jackson, and Judge Jackson herself,” Sen. Richard J. Durbin (D-Ill.), the Senate majority whip and Judiciary Committee chairman, announced in a letter to colleagues Wednesday afternoon.

“Questioning of Judge Jackson will begin on Tuesday, March 22 and continue on Wednesday, March 23,” he wrote. “The hearings will conclude on Thursday, March 24, with testimony from the American Bar Assn. and additional outside witnesses.”

Schumer said he had described her as “brilliant and beloved” before they met because of her record as a jurist and the fact that he and his staff couldn’t find anyone who spoke ill of her. After they met privately Wednesday morning, he added another descriptor: “Belongs.”

“She belongs on the court,” Schumer said, touting her experience working at a law firm, as a public defender, on the U.S. Sentencing Commission and as a judge. “Very few nominees to the Supreme Court have that breadth of experience.”

Though the 50-50 Senate can confirm Jackson without any Republican votes, Schumer expressed optimism that she will make a good impression when she meets with GOP senators.

“I think she deserves support from the other side of the aisle, and I am hopeful that a good number of Republicans will vote for her, given who she is, and when they meet her, they will just be wowed, as I was,” he said.

Jackson returned a committee questionnaire earlier this week. In it, she disclosed that White House counsel Dana Remus first contacted her about her potential nomination on Jan. 30.

Since, she wrote, she had been in contact with Remus, White House Chief of Staff Ron Klain and other officials from the White House Counsel’s Office and Office of Presidential Personnel.

She met virtually with Vice President Kamala Harris on Feb. 11, and with Biden and Remus at the White House on Feb. 14. She said Biden offered her the nomination on Feb. 24, and she accepted it. The following day, Biden publicly announced his intent to nominate her.

Jackson will also meet this week with Rep. Joyce Beatty (D-Ohio), the chairwoman of the Congressional Black Caucus.

“That is one of the things that will be the highlight of the week for me, to have the opportunity to say to her thank you — thank you for being in the battle, thank you for years of service and thank you for not giving up and for working harder,” Beatty said in an interview. “And also I will let her know that any way that we can support, we will be there for her.”

The CBC set up a war room even before Biden announced his nominee Friday, according to an aide who spoke on condition of anonymity.

“We have made very clear that we are a player in this nomination,” the aide said. “We intend to defend her vigorously.”

Only two of the Black caucus’ members will be able to vote on Jackson’s ascension to the high court, Sens. Cory Booker (D-N.J.) and Raphael Warnock (D-Ga.), but Beatty insisted the group will be a factor throughout the confirmation process.

“I think our role is to dispute any misinformation or mis-fact about her,” she said. “I think our role is to speak to America, because while we don’t vote on her, we do vote on the senators who are voting on her. We will do everything it takes to highlight her qualifications, which are exemplary, her years of service as a jurist, her impeccable academic and work career.”

Democrats hope to confirm Jackson ahead of the Senate’s Easter recess in mid-April.

“As I have said from the time that Justice Breyer announced his retirement, the committee will undertake a fair and timely process to consider Judge Jackson’s nomination,” Durbin said. “I look forward to Judge Jackson’s appearance before the committee and to respectful and dignified hearings.”