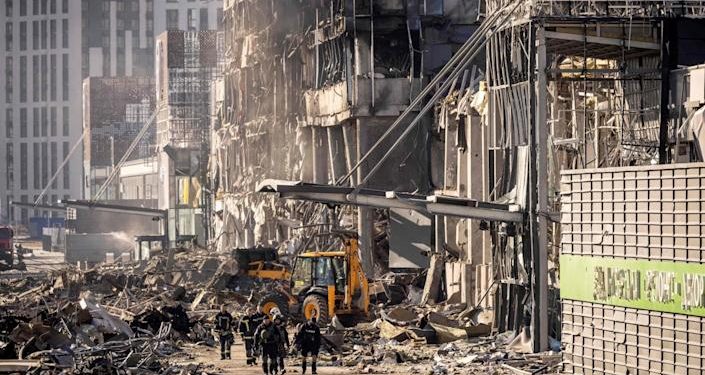 
Talks between Ukraine and Russia are confrontational but moving forward, President Volodymyr Zelensky said on Wednesday, as the West plans to announce more sanctions against the Kremlin.

In an early morning address, Mr Zelensky remained hopeful about negotiations, which have yielded little since the invasion started.

“It’s very difficult, sometimes confrontational,” he said. “But step by step we are moving forward.”

A senior government adviser has warned Ukraine’s peace negotiators may not be prepared for belligerent KGB tactics of Russian counterparts.

Having failed to seize the capital Kyiv or any other major city with a swift offensive, Russia is waging a war of attrition that has reduced urban areas to rubble and prompted Western concern the conflict could escalate – even to a nuclear war.

Russia’s security policy dictates the country would use such weapons if its existence were threatened, Kremlin spokesman Dmitry Peskov told CNN.

Peskov said the campaign was going to plan and no one thought the operation would take just a few days.

The latest pictures from Ukraine

The governor of the Luhansk region in eastern Ukraine has said that an agreement had been reached on a local ceasefire to evacuate civilians trapped by fighting.

Governor Serhiy Gaidai said on the Telegram messaging app that the ceasefire would come into force at 9 am (7am GMT).

Russian President Vladimir Putin intends to attend a G20 summit being hosted by Indonesia later this year, Russia’s ambassador in Jakarta said on Wednesday, following calls by some members for the country to be barred from the group.

“Not only G20, many organisations are trying to expel Russia….the reaction of the West is absolutely disproportional,” ambassador Lyudmila Vorobieva told a news conference on Wednesday. The United States and its Western allies are assessing whether Russia should remain within the Group of Twenty (G20) grouping of major economies following its invasion of Ukraine, sources involved in the discussions told Reuters.

The war in Ukraine has killed 121 children so far, the office of the prosecutor general said on Wednesday in a message on the Telegram app, adding that the number of wounded children stood at 167.

Reuters could not immediately verify the details.

As Ukraine struggles to cope with the immediate casualties of Russia’s invasion, there are fears the war will also ruin the country’s progress in its fight against tuberculosis.

Ukraine has long struggled with tuberculosis, which was the world’s biggest infectious killer before the emergence of Covid and spreads in a similar manner.

Despite being diagnosable and normally easily treatable, the disease kills 1.5 million people a year globally and infects more than 10 million, according to the World Health Organisation.

Ukraine records around 30,000 new cases annually and has one of the world’s highest rates of drug-resistant tuberculosis, which represented 29pc of the country’s new tuberculosis patients in 2018, according to WHO figures.

But Ukraine has worked to address the problem, in recent years becoming the first country to trial a new pill against drug-resistant tuberculosis, which occurs when the two most powerful antibiotics cannot kill the TB bacteria.

Allies aim to prevent war spiralling into even greater catastrophe

Joe Biden will huddle with key allies in Brussels and Warsaw this week as the leaders try to prevent the war from spiralling into an even greater catastrophe.

The US President will today embark on a four-day trip that will test his ability to navigate the continent’s worst crisis since the Second World War.

He said Mr Biden is working on long-term efforts to boost defences in Eastern Europe, where more countries fear Russian aggression. The President is also aiming to reduce the continent’s reliance on Russian energy.

“This war will not end easily or rapidly,” Mr Sullivan told reporters at a White House briefing. “For the past few months, the West has been united. The President is travelling to Europe to make sure we stay united.”

Mr Sullivan said Vladimir Putin’s references to nuclear weapons at the beginning of the conflict were “something that we do have to be concerned about”, adding that Mr Biden would be talking with allies about “potential responses” if the Russian leader took that step.

Mr Sullivan’s description of Mr Biden’s trip was another sign the crisis is entering a new and uncertain phase.

The suspension was to review procedures, requirements and regulations related to flight operations in Russia, VNA said.

The two countries have close ties dating back to the Soviet era. Vietnam has not condemned Russia’s invasion of Ukraine.

Mariupol’s war-torn streets now resemble Stalingrad, a British man trapped in the city as he fights alongside Ukrainians has told The Telegraph, Robert Mendick and Roland Oliphant write.

Aiden Aslin, who has joined a Ukrainian marine unit, said that Russian troops were targeting ambulances and hospitals, and that conditions were getting ever more desperate.

The 28-year-old said food and water were running out and the situation for 300,000 civilians still unable to escape “will only get worse”.

Mr Aslin said: “Situation is really bad in Mariupol, mass war crimes are being committed by Russian forces, they are targeting anyone they see, regardless if they are civilians.”

Russian forces ‘have struggled with logistics’

The Pentagon says Russian forces “have struggled with logistics and sustainment”.

A senior defence official said the Pentagon believes as much as 10pc of Russian forces committed to Ukraine may have been knocked out in just four weeks of fighting.

The UN General Assembly is due to reconvene a special emergency session on Ukraine on Wednesday and vote this week on a non-binding French and Mexican resolution condemning Russia’s invasion.

Almost 100,000 people trapped among ruins in Mariupol are facing starvation, thirst and relentless Russian bombardment, President Volodymyr Zelensky said as the UN sharpened demands for Moscow to end its “absurd” and “unwinnable” war.

Tens of thousands of residents have already fled the besieged southern port city, bringing harrowing testimony of a “freezing hellscape riddled with dead bodies and destroyed buildings”, according to Human Rights Watch.

Mr Zelensky said more than 7,000 people had escaped in the past 24 hours alone, but one group travelling along an agreed humanitarian route west of the city were “simply captured by the occupiers”.

He warned that many thousands more were unable to leave as the humanitarian situation worsened.

“Today, the city still has nearly 100,000 people in inhumane conditions. In a total siege. Without food, water, medication, under constant shelling and under constant bombing,” he said, renewing calls for Russia to allow safe humanitarian corridors for civilians to escape.

Satellite images of Mariupol released by private company Maxar showed a charred landscape, with several buildings ablaze and smoke billowing from the city.

As war drags on, Ukrainian civilians continue to suffer

Russian President Vladimir Putin’s incursion into Ukraine has forced more than 3.5 million people to flee, brought the unprecedented isolation of Russia’s economy, and raised fears of wider conflict in the West.

The United Nations human rights office said it had recorded 953 civilian deaths and 1,557 injured since the invasion.

Millions have fled abroad, according to the UN, leaving Eastern Europe scrambling to provide them with care, schools and jobs.

Kyiv accused Moscow of deporting residents of Mariupol and separatist-held areas of Ukraine to Russia. This includes the “forcible transfer” of 2,389 children to Russia from the Luhansk and Donetsk regions, Prosecutor General Iryna Venediktova said.

Moscow denies forcing people to leave, saying it is taking in refugees.

No one had ever thought the operation in Ukraine would take just a couple of days and the campaign was going to plan, Kremlin spokesman Dmitry Peskov said.

Western officials said Russian forces were stalled around Kyiv but making some progress in the south and east. Ukrainian fighters are repelling Russian troops in some places but could not roll them back, they said.

Russia’s combat power in Ukraine has declined below 90pc of its pre-invasion levels, a senior US defence official said. If confirmed, it would suggest heavy losses of weaponry and growing casualties.

Having failed to seize a major Ukrainian city with a swift offensive, Russia is waging a war of attrition that has reduced some urban areas to rubble and prompted Western concern that the conflict could escalate into a nuclear war.

Russia’s security policy dictates that the country would only use such weapons if its very existence were threatened, Kremlin spokesman Dmitry Peskov told CNN.

“If it is an existential threat for our country, then it (the nuclear arsenal) can be used in accordance with our concept,” he said.