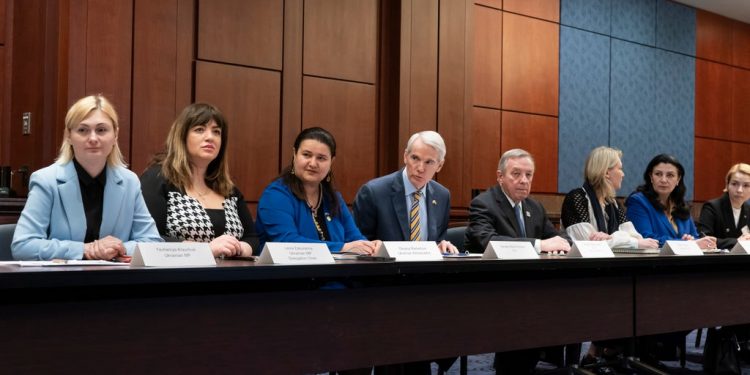 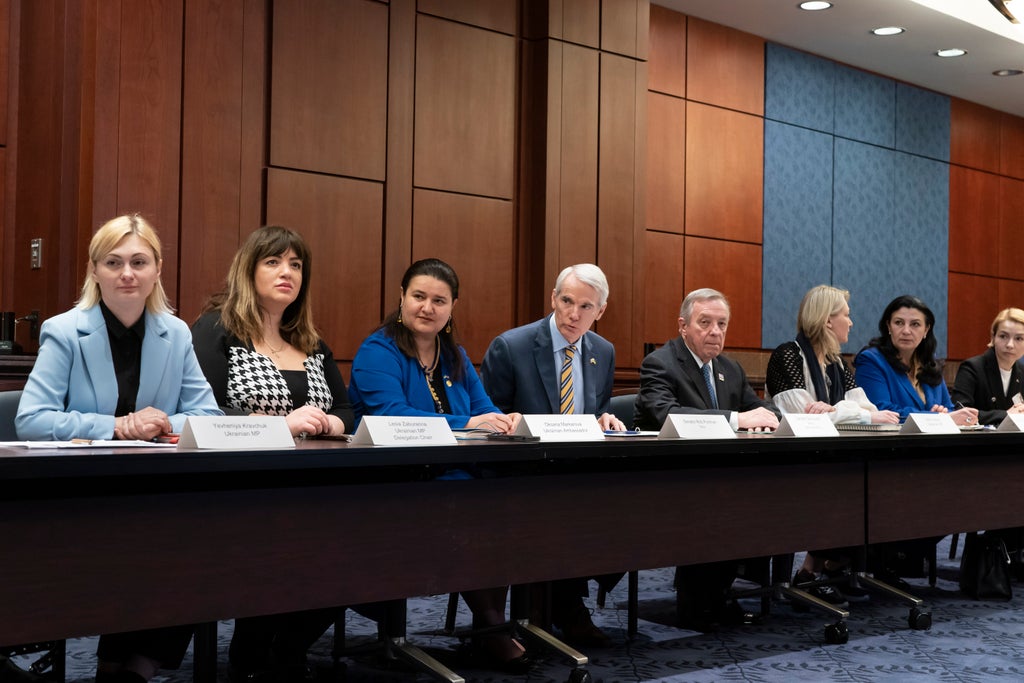 As members of the Ukrainian parliament were pleading for aid on Capitol Hill, an air raid siren blared from one of their cell phones — a wrenching alert from the war-torn country back home.

One of the visitors reached into her bag, pulled out the phone and let the siren wail in the halls of Congress.

“Right now, you hear the sound?” said Anastasia Radina, a member of the Ukrainian Rada.

“This is the air raid alarm in the community where my son is staying right now,” she said at a press conference this week after meeting with members of Congress. “I need you all to hear that.”

The Ukrainian lawmakers met for a second day Wednesday with their counterparts in the U.S. Congress, urging American allies to more quickly provide additional military aid — fighter jets, tanks and other support — and to impose stiffer economic sanctions on the invading Russians they’re trying to push from their country.

The visiting legislators, all women, with family back home, were warning the U.S. that they do not trust negotiations underway with Russian President Vladimir Putin over ending the monthlong war. And they impressed on the Americans that their country is at a crucial juncture in the fight against his invasion.

“They desperately need more help both with military assistance and the tightening of sanctions,” said Sen. Rob Portman, R-Ohio, emerging from Wednesday’s private meeting at the Capitol.

U.S. lawmakers have been pressing President Joe Biden’s administration to do more for Ukraine — providing their political support for sanctions on Russian leadership, a ban on Russian oil imports to the U.S., even declaring Putin should be investigated for war crimes.

Biden on Wednesday announced that the U.S. will send another $500 million in direct aid to Ukraine as the Russian invasion continues. At the same time, the Senate was working to pass legislation suspending Russia’s favored trade status — a measure that has been tangled over a related human rights provision, even though there is widespread support for suspending normal trade relations and halting Russian oil imports.

Lawmakers emerging from two days of meetings with the Ukrainian lawmakers kept up a largely unified front, with both Republicans and Democrats saying more funding would be needed, beyond the nearly $14 billion in military and humanitarian aid recently approved. Many are members of the Ukraine Caucus in the House and Senate, formed years ago to bolster the emerging democracy after it emerged from the former Soviet Union.

Sen. Chris Murphy, D-Conn., described a sense of “buoyancy” in the room with the Ukrainian lawmakers Wednesday amid word of a possible Russian move away from Kyiv, even as he acknowledged the likely fighting still ahead.

“The Russians are losing this war, which is extraordinary,” he said. “While the Ukrainians are looking at the scope of the loss of life, man, this has been a sight to see. A real inspiration. And there’s a lot of support in Congress to continue to help them.”

Yet there is concern in Congress that Biden’s administration is too timid in its response and too slow to send needed military equipment. Some speak of an administration “Afghanistan Syndrome.”

Republicans in particular, but also Democratic lawmakers, suggest there’s a hesitancy from the U.S. to push deeper into an overseas conflict with commitments of military aid after 20 years fighting the “forever war” in Afghanistan.

Sen. Joni Ernst, R-Iowa, said the Ukrainians she had met with in the past had used that term “Afghanistan Syndrome,” but on Wednesday the Ukrainian legislators instead spoke with urgency about the military aid they need — with fighter jets at the top of the list.

“If they’re going to win, they need more,” Ernst said. “And they know they can win. But they just need the support coming from the United States.”

The Ukrainians delivered a long list of specific military equipment they are requesting, and senators said at the top remain the fighter planes the Biden administration has been reluctant to transfer from NATO ally Poland.

The Ukrainians told reporters after meeting with House lawmakers a day earlier that they also want other air support systems as well as tanks to push the Russians back from their cities.

While Ukrainian President Volodymyr Zelenskyy has roused the world to his country’s side, speaking via video livestreams to legislative bodies around the world, the Ukrainian legislators provided their own compelling portrait this week in Washington — women fighting for their country abroad while their loved ones and families fight from home.

They said that while they are thankful for the U.S. help their country has received, they need more — especially now, as Russia’s strategy may be shifting.

They are wary of talks with Putin, and they framed the war ravishing their country not only as a fight for a Ukraine, but for all of Western democracy.

“For us neutrality is not an option,” said parliament representative Ivanna Klympush-Tsintsadze. “Neutrality accepted today, it’s a slavery tomorrow — slavery under the Russian Federation.”

Some lawmakers on Capitol Hill are making weekend trips to the Ukrainian border regions to understand the war first-hand. What they’ve seen is reminiscent of imagery many grew up with learning about World War II.

“It’s freezing cold. There’s like a little gust of snow, I mean, most folks didn’t have winter coats, they had like one bag,” said Rep. David Cicilline, D-R.I., recounting what he saw a few weeks ago on the Polish border.

“It was reminiscent of the Second World War,” he said. “You’re just like watching, you’re just seeing this mass exodus of people.”