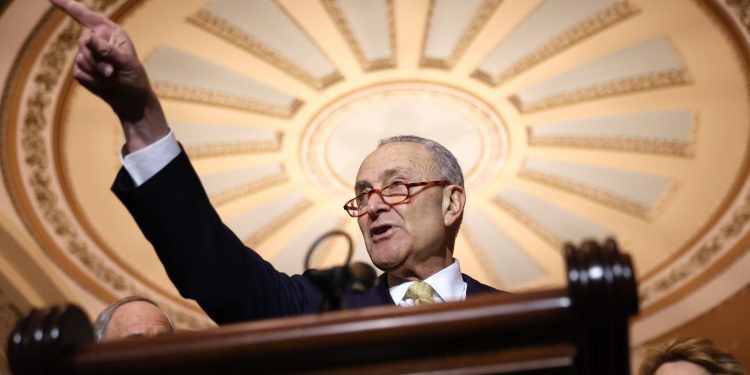 
“We cannot let it be said that America, after the third or fourth variant hits our shores, is unprepared, does not have adequate testing, therapeutics, vaccines,” Senate Majority Leader Chuck Schumer said in a floor speech Tuesday morning urging his colleagues to approve the $15 billion in funding. “Both sides of the aisle have come to realize that new Covid funding today is about insurance. Far better to prepare today than play a frantic game of catch-up tomorrow when it’s too late.”

Just last week, the White House had argued that they needed at least $22.5 billion just for their immediate needs, already a reduced number from the more than $30 billion they originally requested. The Office of Management and Budget did not respond to a request for comment.

Its. Roy Blunt of Missouri, the top Republican appropriator for health funding, told reporters Monday night that the Biden administration had recently communicated the even lower number to lawmakers, noting that because of the opposition to more spending on Covid from his own side of the aisle: “Maybe they think it’s all the traffic would bear right now.”

Still, Blunt stressed, the $15.6 billion is only enough to keep Covid operations funded for the short term, and the administration is likely going to have to come back and ask for more.

“They’ve never pretended that they thought this money would last for very long,” Blunt said of the White House’s Covid request.

Many lawmakers worry, however, that those future tranches of funding will be even harder to pass through Congress without the vehicle of a massive government funding bill that includes emergency military aid to Ukraine.

“We’ll have to find some other bills to tack it onto. It’s disappointing,” Rep. Pramila Jayapal (D-Wash.), the head of the Congressional Progressive Caucus, told POLITICO. “It’s just hard to get bipartisan agreement to do more on Covid. So we’ll take what we can get now and try to get more later.”

Several Republicans have made it clear they oppose any new spending on a pandemic they have recently voted to declare a thing of the past, and even some Democrats previously expressed anxiety that the fight over the Covid funding would derail delicate negotiations over funding the rest of the government. But some have been mollified by the Biden administration’s reduced request.

“Now they have a more realistic package so I have no problem putting it together as an emergency supplemental along with the Ukraine emergency,” top Democratic appropriator Patrick Leahy of Vermont told reporters. “It’s quite a bit different than what they originally presented.”

The cyber warfare predicted in Ukraine may be yet to come

The cyber warfare predicted in Ukraine may be yet to come