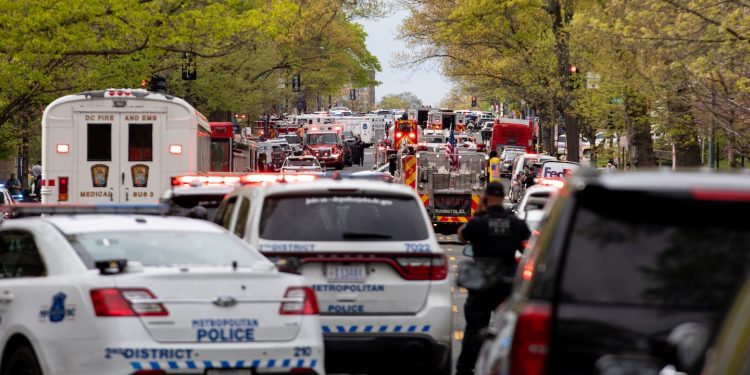 Three people including a child were injured Friday afternoon when police say gunfire erupted in a busy area along Connecticut Avenue in Northwest Washington, plunging schools into lockdown and sending terrified residents running for safety.

Police were still searching for the shooter more than 2 1/2 hours after the first shots were reported about 3:20 p.m. in the Van Ness area, keeping the neighborhood and the city on edge, and prompting police to warn on Twitter that there was an “active threat.”

Authorities said a man and woman were critically hurt and the child suffered a minor injury.

Heavily armed police in tactical gear and federal agents poured in the area conducting an extensive search of buildings and streets, as law enforcement officers in helicopters scanned the area from above. Officers questioned people fleeing and had some hold their hands up in the air to make sure they weren’t involved.

One young man seen taken into custody was not connected to the case, police said. A couple said they heard three rapid bursts of gunfire of perhaps 20 shots each, and saw people hiding under a truck near a school as the shooter appeared to fire from a balcony in an apartment building on Van Ness Street NW.

D.C. police said the location of the incident was in the 2900 block of Van Ness Street, off Connecticut Avenue, and that police were conducting “active sweeps.” Police urged residents of Cleveland Park and Van Ness to shelter in place.

During an evening news conference where a helicopter whipped overhead and police continued to escort people out of buildings, Mayor Muriel E. Bowser (D) said of the victims, “We are praying for their health and well being.”

Asst. D.C. Police Chief Stuart Emerman said at 5:30 p.m. that police were still trying to pinpoint where the shots came from and where the victims were struck. He said some scattered and were found injured elsewhere.

Emerman also said investigators are aware of social media posts purporting to contain details of the shooting but he cautioned those posts have not been verified. He assured parents of one school that children were safely sheltering inside and a police officer was with them.

The assistant chief added, “We do not have a motive at this time.”

The gunfire comes amid a series of recent mass shootings around the country that has unnerved residents.

Diane Roberts, a freelance broadcast reporter who has lived in Van Ness for 20 years, said she had never seen as many police officers in her neighborhood as she saw Friday.

When she heard a series of pops echo outside her window, she at first thought nothing of it.

“I didn’t even consider gun shots,” she said, adding she then heard voices outside her window screaming to “move” and “get down.”

She rushed to her window and saw police streaming down the street and helicopters circling above.

At about 5:10 p.m. a green armored vehicle drove northbound on Connecticut Avenue and turned right onto Van Ness Street. A team of about half a dozen personnel — dressed in green camo and carrying semiautomatic rifles — got out, conferred with a police officer and then moved cautiously up Van Ness, walking on the north side of the armored vehicle for cover.

Another black armored followed minutes later, which was carrying two men in camo riding in the back.

The shootings occurred shortly after the Edmund Burke School dismissed students for the day at 3:15 p.m. Students were streaming out of the building when they heard gun shots, and a couple ran for shelter to a nearby CVS. Others were still in the building.

The lockdowns from the shooting extended to the Sidwell Friends School around Tenleytown. Most of the students at the private school had gone home for the day, but spokesman Bill Burger said that there was after school programs and two athletic events scheduled Friday afternoon.

A spokeswoman for D.C. Public Schools said at least two of its schools — Hearst Elementary and Wilson High — are on alert and students playing sports and in after school care programs have been brought inside to shelter. Both schools are located about a mile away from the reported site of the shooting.

James Tandaric, an advisory neighborhood commissioner who lives in the area, said he was at work Friday afternoon when his boyfriend, on a walk in the neighborhood, texted him that he had heard gunshots.

He received an email from the apartment just before 4 p.m., saying they had “been aware of a possible emergency adjacent to the building.”

“We are all in shock currently,” Tandaric said.