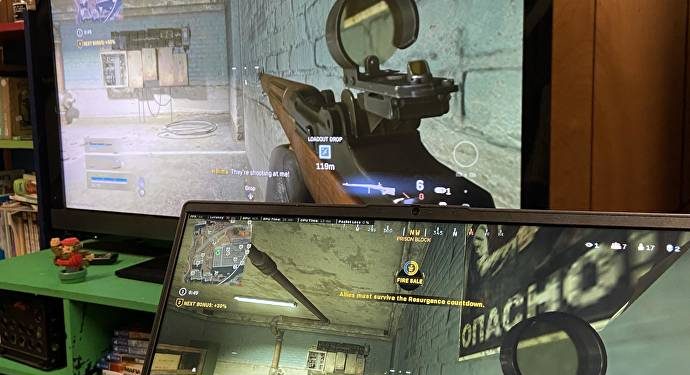 
If you’ve been a Warzone player for a while, especially a console player who prefers to dive down into the fray from the comfort of a couch rather than a gaming chair, then you’ll likely be aware of the ongoing discussion surrounding field of view (FOV) sliders.

For those unaware, a simple description of what FOV refers to is the amount you can see on your screen at any time. Where Warzone gets flack on this topic is the sheer difference between what players on consoles can see, compared to those playing on PC.

As it stands, console players are able to max out their FOV to 80, while PC players can ramp that up all the way to 120, giving them an extra 50% larger view of their surroundings. In a game like Warzone, with a quick time-to-kill especially in close quarters, this gives PC players a vast advantage.

To show the problem clearly, Reddit user Maximus0066 posted a photo of the game running on both PC and console at the same time, with their character standing in the same location. The differences are immediately apparent, with the PC player able to make out the full back wall of the room, whereas the console player is unable to see much past the window.

Now, this issue has been addressed before. Creative director Ted Timmins responded to questions regarding FOV on consoles back in December. While it didn’t provide any concrete information on if or when an update was coming, it did confirm that the team is aware of concerns.

Definitely aware of this, especially that I speak as a console player.

Thing is, if I tweet literally anything then it will become a headline which wouldn’t be fair on me or the team. I just hope that these patch notes make it clear; you are being heard, and we are listening.


Bearing in mind that Caldera has just recently been released, and more pressing matters such as invisible skins and server stability are likely priorities at the moment, it’s safe to assume that we’ll have to stay patient and wait for more information on this matter for the moment.

That being said, it’s still a major concern and one that does need addressing. With an FOV slider present in Call of Duty: Vanguard, fingers crossed that the good folks working on Warzone can figure it out, too, in good time.

For more Warzone content, check out our Warzone Pacific best weapons guide, as well as our article on how to level up weapons quickly in Warzone.