I rarely need an excuse to visit Fowey. This pretty harbour town on the south Cornish coast has a Riviera atmosphere, exquisite views, buzzy streets stuffed with independent galleries, shops and decent restaurants, plus little coves and beaches nearby.

It can be pricey – it is among the top five most expensive UK seaside towns for fish and chips – but it’s worth it just to be here.

Fowey Harbour Hotel is perfectly placed to explore the town. The recently restored cream-and-white solid Victorian building lords it over the Esplanade and has impressive views from its rooms, wraparound terrace and two-tiered gardens – the lower one being just a few steps from the water. 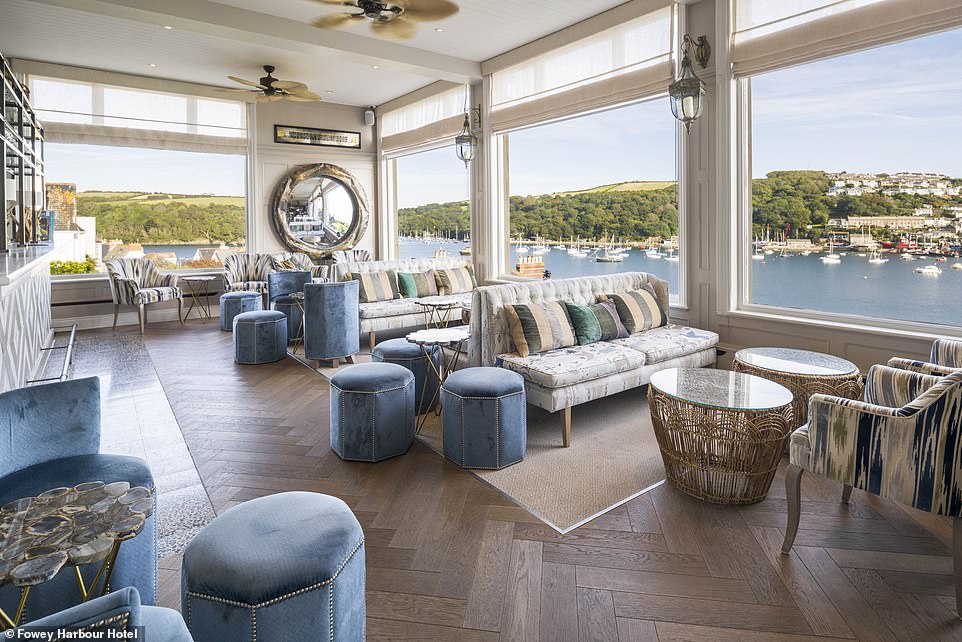 Harbour view: The vista from the bar area at Fowey Harbour Hotel, set in the pretty town of Fowey on the south Cornish coast 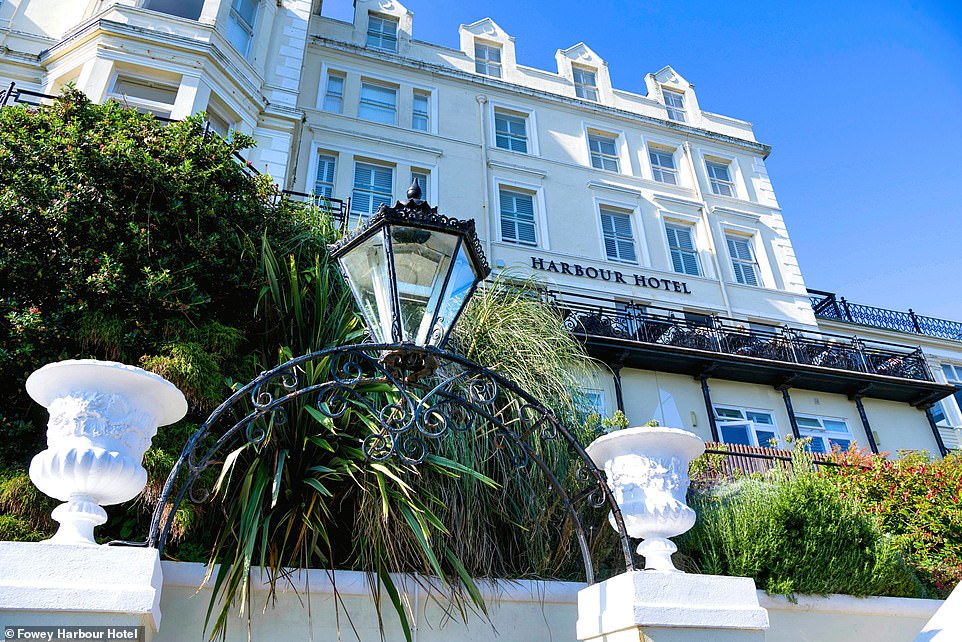 According to Vicki, the recently restored cream-and-white solid Victorian building is perfectly placed to explore the town

Despite sporting a rack of wellies, the foyer sets up a surprisingly exotic vibe. Monkeys climb the wallpaper and swing, alongside parrots and toucans, from the rattan light by the lift cage in the Moroccan-tiled hallway.

Ceiling fans and palm-leaf wallpaper, artworks and even Hibiki Japanese whisky behind the well-stocked bar have a touch of the Orient, while the over-water views confirm our Cornish whereabouts.

Stepping into our large Superior Seaview room it feels as fresh as a sea breeze, with a blue-and-white scheme. It’s coastal without the cliches, except you really can hear the waves lapping. 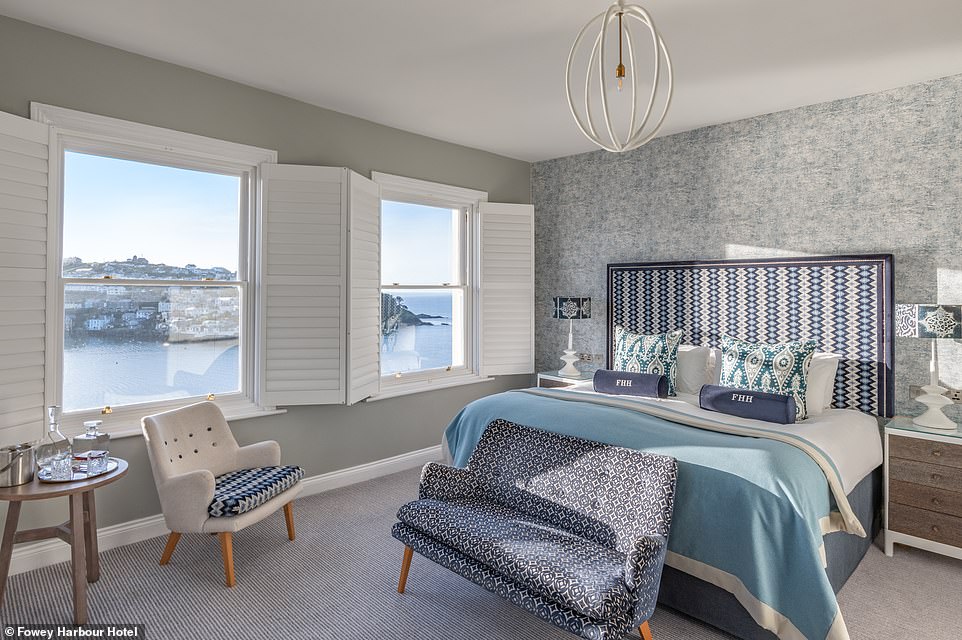 ‘Many of the hotel’s 37 rooms have a harbour view, and even when the weather is dull it would be easy to spend hours… just looking out at it,’ writes Vicki 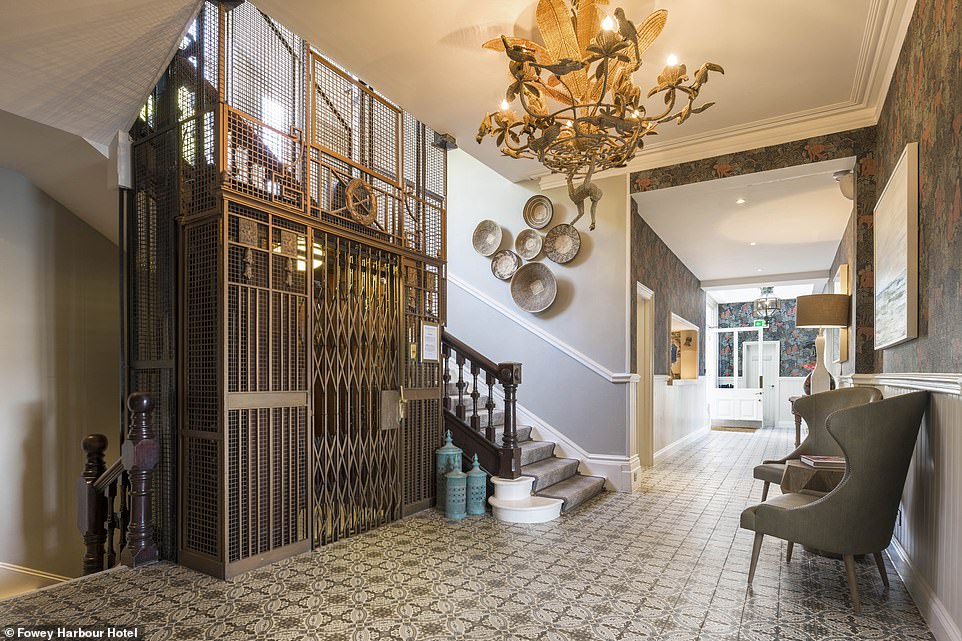 Vicki says the hotel’s decor creates a ‘surprisingly exotic vibe’, from the rattan light fixtures to the Moroccan-tiled hallway 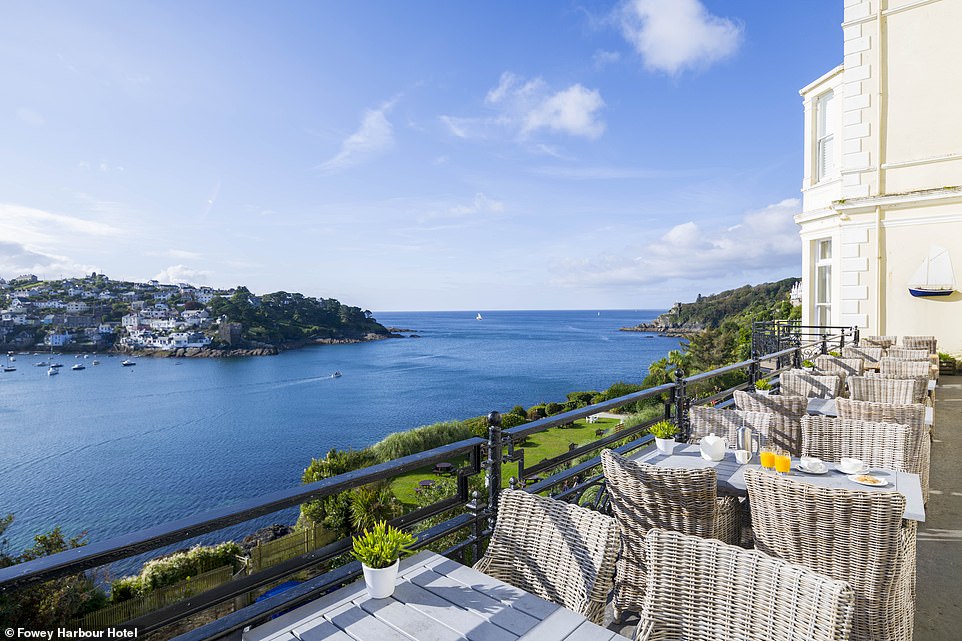 Fowey Harbour Hotel has impressive views from its wraparound terrace, pictured above. B&B doubles at the hotel are priced from £125 per night

French windows with full-height shutters let in plenty of light and again draw us towards that beautiful harbour vista.

The vast, high bed has a chic blue-and-white ikat-style headboard in a William Yeoward fabric and a generous plump of cushions.

Bright, white and classically styled in marble, the bathroom has a double-sink vanity unit and a shower over the bath with Bramley toiletries.

Many of the hotel’s 37 rooms have a harbour view, and even when the weather is dull it would be easy to spend hours sitting on the cute bedroom sofa just looking out at it while getting stuck into the complimentary gin and sherry – a perk for all guests. 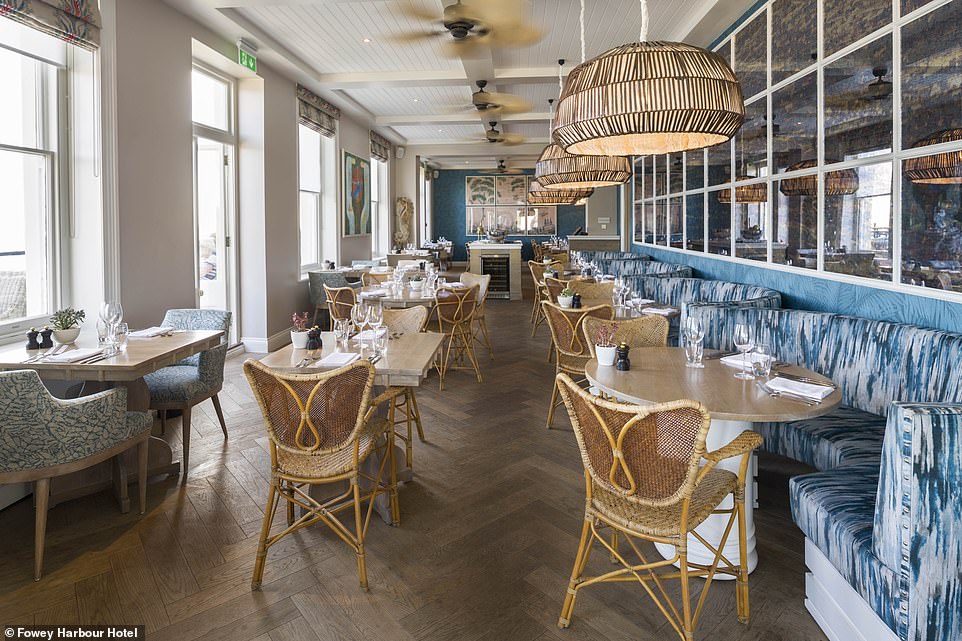 Bream caught earlier in the day and a hearty take on affogato are the standout dishes at the hotel’s restaurant (pictured), says Vicki 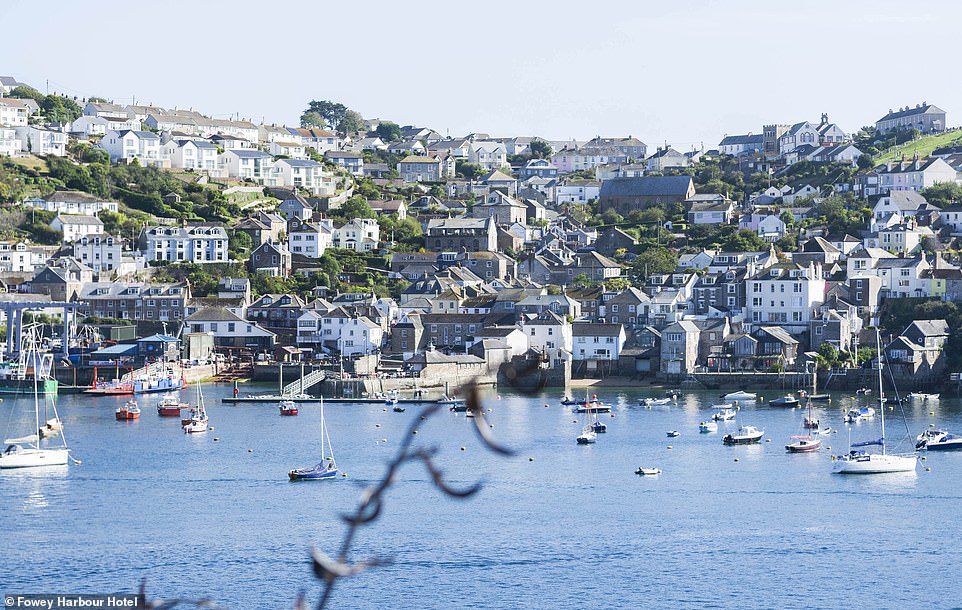 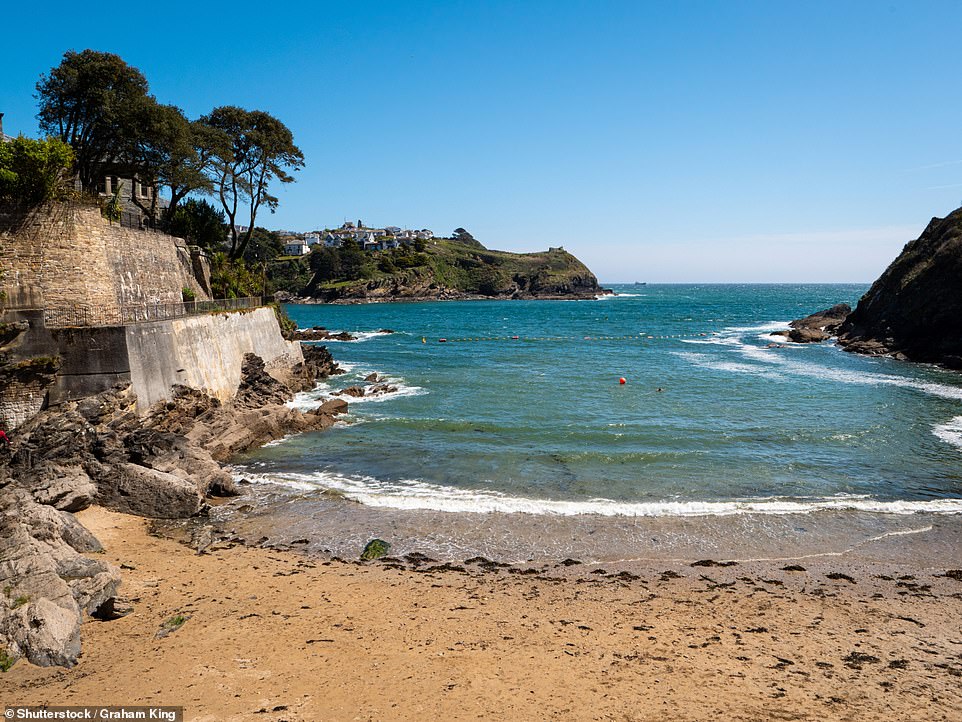 According to Vicki, Fowey has plenty of ‘little coves and beaches’ that are worth visiting, including Readymoney Cove (pictured) 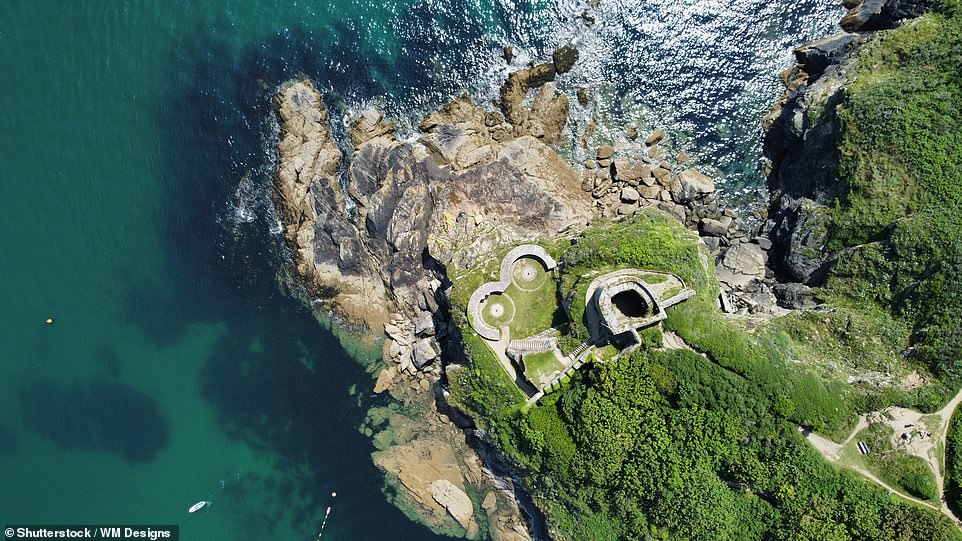 Taking advantage of the good weather, Vicki sets out to explore the area around St Catherine’s Castle, pictured, during her stay

But, blessed with good weather, we started our day by lazing on the terrace outside our room before a fun afternoon of walking the dog (they’re welcome at the hotel) and exploring the area above Readymoney Cove and around St Catherine’s Castle.

I recommend you book a parking bay at the hotel – spaces are limited and, annoyingly, cost £10 per night – or risk the busy but cheaper town car park a two-minute drive away.

On our return, we find the service a joy at both bar and restaurant, where bream caught earlier in the day and a hearty take on affogato are the standouts. Many of the menu’s ingredients are sourced locally and seasonally.

It was a treat to have an early night and to wake up to the sound of waves and fishing boats chugging out to the ocean.

And after tearing ourselves away from that picture-postcard view over the harbour, breakfast offerings included a full English as well as a veggie version with grilled halloumi.