Coronavirus UK: NHS hospitals ‘could be banned from Covid vaccines’ if they give second doses

NHS hospitals could be banned from giving out Covid vaccines if they don’t stick to the strategy of delaying second doses by three months or longer.

A leaked internal memo sent to staff at an NHS trust in Southampton warned second doses must not be given out too soon.

The Government in Britain has gone against vaccine manufacturers’ instructions to space out the first and second doses of Covid-19 vaccines by 12 weeks or more instead of the recommended three weeks.

The controversial decision was made to try and stretch the limited supply of jabs to cover as many people as possible, rather than offering stronger protection for a smaller number.

But it has drawn sharp criticism from scientists and doctors, with medics now writing to the Health Secretary Matt Hancock and vaccines minister Nadhim Zahawi to urge them to rethink the policy.

The Doctors’ Association UK said no studies had been done to prove a single dose of a vaccine, or two spaced very far apart, would reliably prevent cases of Covid-19.

It comes as Matt Hancock today boasted that Britain has given more than 5million doses to 4.6million people across the UK – around one in every 14 people. 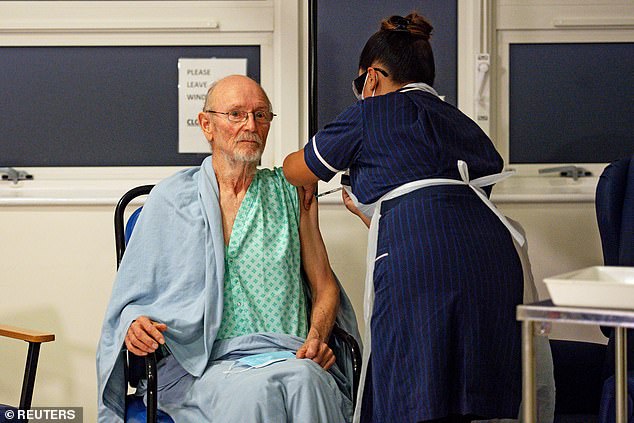 William Shakespeare, 81, was one of the first people in Britain to receive a Covid vaccine. He is pictured at a hospital in Coventry last year

Staff at the University Hospital Southampton NHS Trust, The Independent reports, received an email that said: ‘This has become of the highest political import. David French, our CEO, has been sent a letter which is absolutely crystal clear and leaves nothing to the imagination – we are not to offer any second vaccines before 12 weeks under any circumstances, at risk of losing our licence.

ISRAEL STUDY SUGGESTS PFIZER VACCINE ONLY 33% EFFECTIVE AS ONE DOSE

Israel’s top coronavirus medic has claimed the first dose of Pfizer ‘s Covid vaccine is less effective than he expected.

Dr Nachman Ash, one of the medics leading the Covid-19 response in Israel, said the first instalment of the jab did not cut infection rates as much as he had hoped.

He told local media Army Radio: ‘Many people have been infected between the first and second injections of the vaccine.’ It can take 10 days or more for the immunity to kick in.

Real-world data from Israel’s world-beating rollout showed the first dose led to a 33 per cent reduction in cases of coronavirus between 14 and 21 days afterwards in people who got the jab. Another of the country’s top doctors said it was ‘really good news’.

But the figure is lower than the British regulator’s estimate, which said it may prevent 89 per cent of recipients from getting Covid-19 symptoms.

However, Israel’s data does not prove anything about possible impacts of the UK’s controversial 12-week gap between doses. The country does not give any more than three weeks between the first and second doses, during which time protection is expected to be minimal at best – and the vaccine is not intended to prevent infection, but severe disease and death.

Sir Patrick Vallance, the UK’s chief scientific adviser, said he would expect all vaccines to be less effective in the real world than in trials. He added that Britain should look ‘very carefully’ at data during the vaccine rollout to see what effect its having.

Dr Ash’s comment comes after Britain’s decision to prolong the gap between the first and second doses from three weeks to 12 weeks triggered anger among scientists.

Pfizer’s own data shows that protection from Covid starts from about 12 days after the first dose but one jab can only prevent around 52 per cent of cases of disease, compared to the 95 per cent reduction offered by two. It does not offer any proof that a single dose works for longer than three weeks.

For this reason, the US pharmaceutical firm refused to endorse Britain’s decision to change the dosing schedule, saying there was no proof it would work.

‘This is not at the present time negotiable in any way. A region near us has given 34 second doses and are being investigated centrally.’

The letter was sent by anaesthetist Dr Caroline Marshall, who had been chief operating officer at the hospital before the Covid pandemic.

A spokesperson for University Hospital Southampton Foundation Trust told The Independent: ‘No vaccine has been wasted as we have progressed through our first dose programme, offering a second dose 12 weeks after the first, which is in line with national guidance.’

NHS England denied the claim that hospitals would lose their vaccination licences for not following the rules, but declined to comment.

The Joint Committee on Vaccination and Immunisation (JCVI), which sets the ground-rules for the vaccine programme, has said the country should get first doses of the jabs to as many people as possible.

Although a single dose of the two-dose vaccine regimes will not offer as much protection, it may still prevent many people from getting Covid-19.

The JCVI claims that one dose of Pfizer’s vaccine could prevent as many as 89 per cent of illnesses.

But new data emerging in Israel suggest this initial dose’s protection could be as low as 33 per cent, meaning two thirds of people given the single vaccine dose could still catch Covid if they were exposed to the virus.

This has not yet been verified in a publicly available scientific study, but raises concerns about Britain’s strategy.

When the UK made the decision to split the doses with a wider gap than Pfizer had intended, both the company and the World Health Organization refused to endorse the policy because they said there was no proof the jab would still work.

Now, angry doctors have written to the Government to urge them to rethink.

Doctors’ Association UK has warned the move risks patients’ health and there is no reliable science to prove the vaccines work when given in this way.

It said: ‘We must be clear that it is completely unacceptable to ignore the need for a second vaccination.

‘All studies confirm the need for this to provide reliable and lasting immunity.

‘It must be noted that there is currently no data around the reliability of the immune response if vaccines are interchanged.’

They added: ‘We understand the rationale for the delay in scheduling the Pfizer-BioNTech second dosing from three to 12 weeks.

‘The concerns arise from decisions being made without acknowledging the consequences of enacting them on the front line.

‘We are concerned that there are no clear plans to follow up and monitor the immunity of these patients, to ensure the 12-week booster will be adequate, given that this schedule goes against the advice of both the manufacturer and WHO.’

UK’S VACCINE ROLLOUT ‘BACK ON TRACK’ AFTER BUMPY WEEKEND

Hopes that Britain’s great Covid vaccine rollout is still on track were raised yesterday as official data revealed the UK dished out 346,000 jabs on Tuesday following fears the NHS drive may have stalled.

Boris Johnson insisted the UK is still on schedule to inoculate 14million vulnerable people by mid-February. But the Prime Minister — who was grilled by MPs about the operation today — warned ‘constraints on supply’ were making the situation harder.

Fears that the NHS scheme had stagnated were sparked yesterday after data revealed the number of doses dished out had fallen for three days in a row.

But fresh statistics show 343,163 people got their first Covid vaccines yesterday, meaning 4.5million Britons have now had their first dose. One government insider told MailOnline they hoped it meant that the rollout was ‘back on track’.

In order to meet the lockdown-easing target, the Government must average more than 350,000 doses a day from now until February 15, with the previous bullish tone from officials getting toned down in recent days. 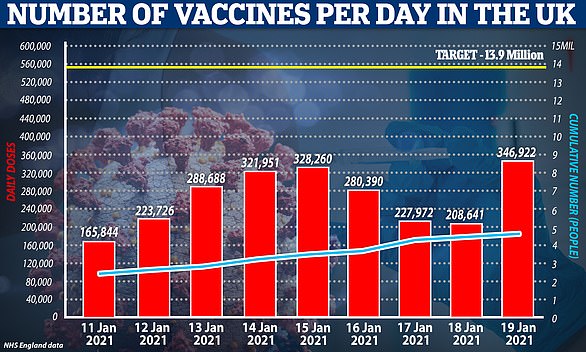 It came as the UK announced another 1,820 people had been killed by Covid-19, and 38,905 more people tested positive.

The promising vaccine data bring relief after confusion about the reason for a three-day blip in performance when jab numbers fell, with officials saying there were a ‘lot of moving parts’ that contributed to the slowdown.

Pfizer’s supplies have been dented by a factory upgrade which will continue into next month. Government sources have flatly dismissed claims there are 21million doses of vaccines already in the country, although they refused to give details of stocks saying it would be a security risk.

Sources say other factors include the ‘intermittent’ deliveries of supplies and difficulties contacting the remaining over-80s and covering care homes. MPs have also voiced frustration at the way supplies have been divvied out. In London — which has dished out the fewest jabs — the allocation is believed to have been based on take-up of last season’s flu vaccine, which was relatively low.

Meanwhile, there are complaints that the system is descending into a ‘free for all’ with council staff being given jabs before 70-somethings in some areas. The Evening Standard today claimed ineligible Britons have been able to jump the vaccine queue ahead of the elderly by signing up through links being shared on WhatsApp that some NHS trusts use to arrange appointments for medics.