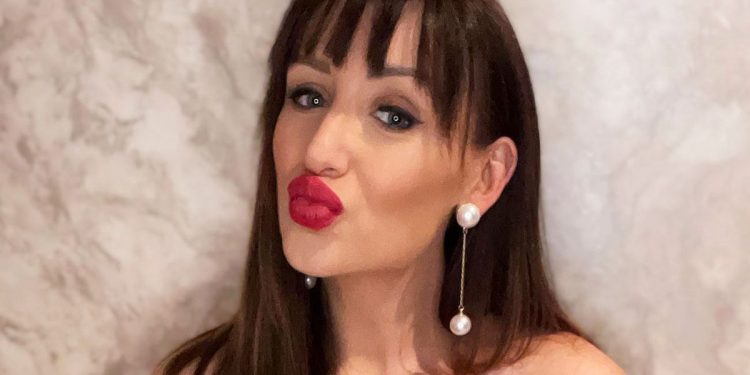 Catherine Tyldesley sings with her adorable son Alfie in 2020

Coronation Street alum Catherine Tyldesley has shown off her growing baby bump on social media, with her teasing the difference between photos on Instagram and “reality.”

The actor, 38, – best known for her role as Eva Price on the ITV soap from 2011 until 2018 – announced that she was expecting her second child towards the end of last year.

She’s posted updates about the pregnancy on social media in recent weeks, with her showcasing her bump in a series of photos uploaded on Valentine’s Day this week.

Two photos showed Catherine in a figure-hugging red dress, cradling her belly, with them understood to have been taken by her husband, Tom Pitfield – who is a photographer.

In a recent post, she was seen pouting for the camera in an off-the-shoulder dress
(

The Strictly Come Dancing alum is seen pouting in one of the photos, with her sporting red lipstick and accompanying the off-the-shoulder gown with pearl earrings.

She also shared a third photo in the post, with the additional snap showing how she looked shortly after taking the first two photos – with a much more casual vibe in the third.

The third photo showed her lying on a sofa in loungewear, with her eyes closed and a bag of crisps seen on her lap.

Alongside the photos, the actor – whose credits include sitcom Scarborough – wrote: “Swipe for Insta Vs Reality. The dress, make-up and support bra lasted about 20 minutes.”

Catherine Tyldesley announced that she was pregnant last year
(

She continued: “By the third pic, I’d achieved my true goal … PJs and a bag of crisps.” The former soap star used the hashtags #bigmomma and #valentinesgoals in the post.

Her followers on the platform praised Catherine, who was referred to as “gorgeous” and “stunning.” One follower wrote: “You are insanely beautiful on all of the pictures.”

Catherine and husband Tom – who are already parents to son Alfie, six – announced the news of her pregnancy in October last year, with the couple set to have a daughter.

She said at the time of the announcement that they had “burst into tears” when they found out, with her later commenting on the news in a post on her Instagram page.

“I can’t tell you how utterly blessed we feel right now. We are so happy to announce that [Tom]Alfie and I are expecting a baby. It’s been tough keeping this a secret,” she wrote.

San Francisco school board recall a warning for Democrats