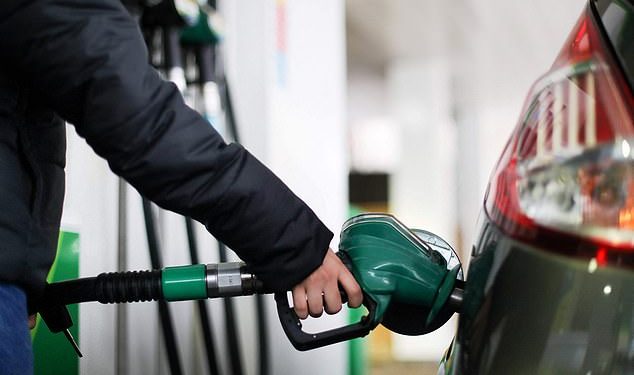 
The cost of filling a 55-litre family car with petrol has exceeded £90 for the first time, but wholesale oil prices are now falling, according to RAC Fuel Watch.

The average price of a litre of petrol rose to 163.71p on Monday, marking another new record, Simon Williams, a spokesman for RAC Fuel Watch, said.

Diesel also recorded another all-time high at 173.68p yesterday after increasing by the tiniest of margins.

However, with a barrel of Brent crude oil now back below the $100 mark, in theory, lower prices at the pumps should be seen in the not too distant future if retailers do the right thing and reduce their prices. 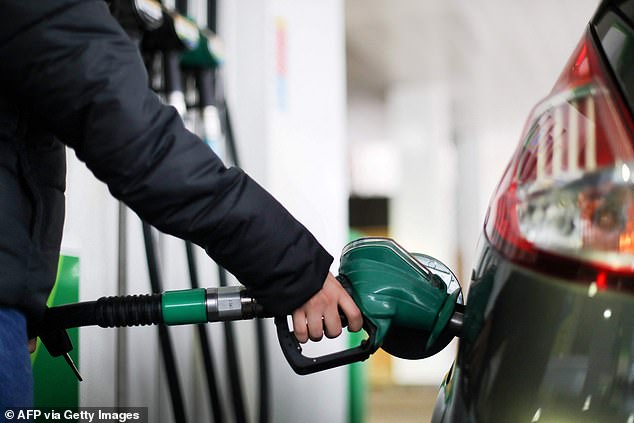 Costly: The cost of filling a 55-litre family car with petrol has exceeded £90 for the first time this week, RAC Fuel Watch said

‘It’s now vital that the biggest retailers who buy fuel most often start to reflect these reductions at the pumps to give drivers a much-needed break from the pain of constantly rising prices.’

Brent crude has now reversed all of its March gains and is back below $100 a barrel, after climbing to as high as $139 in the last few days. The price was around $80 at the start of the year.

Victoria Scholar, head of investment at Interactive Investor, said: ‘Oil prices are down by more than 5 per cent reaching two-week lows.

‘The prospect of a diplomatic solution towards Russia’s military aggression against Ukraine would help ease the world’s energy supply shock that has sent commodities soaring.

‘Although no progress was announced, the two sides engaged in their fourth round of talks on Monday.

‘Meanwhile on the demand side for oil, fears about an aggressive policy response from Beijing to China’s Covid outbreak has raised the prospect of a much weaker demand for oil from the world’s second largest economy.’

Michael Hewson, chief market analyst at CMC Markets, said today: ‘Today’s sharp fall in oil prices looks set to offer a temporary respite to beleaguered consumers here in Europe, as well as the US, as they worry about the recent surge in energy prices on their disposable incomes.’

While falling oil prices may offer a glimmer of hope for motorists, it remains unclear how prices will pan out in the coming days and weeks, particularly in light of fragile negotiations between Russia and Ukraine.

Drivers are being warned that pump prices could in fact rise even further, with experts warning the sudden crude oil price drop could just be a ‘lull before the storm’.

She also warned MPs that diesel prices of ‘£2.50 – even closer to £3’ were ‘definitely in the realms of possibility’.

The slide in the oil price came as the International Monetary Fund said Ukraine’s economy could shrink by more than a third this year if the war with Russian continues.

Predicting a slump of 25 per cent to 35 per cent, the watchdog said the estimates should be ‘seen as a bare minimum’.

The financial institution added: ‘A deep recession and large reconstruction costs are to be expected, on the backdrop of a humanitarian crisis.’

Figures from data firm Experian Catalist show the average cost of a litre of petrol at UK forecourts on Sunday was 163.5p, while diesel was 173.4p.

AA fuel price spokesman Luke Bosdet said this week: ‘Unless the price of oil takes off again this week, the AA expects these wild pump prices to stabilise this week and even fall back at fuel stations that were supplied at peak prices but will eventually get cheaper deliveries.’

The war in Ukraine and Western sanctions on Russia have driven oil prices higher in recent weeks amid fears over supplies.

But hopes that talks could lead to a ceasefire and resolution of the conflict have sent oil into reverse in recent days.

China’s decision to lockdown a number of cities including Shenzhen – one of the world’s largest ports and a major technology hub – also dented the oil price as concerns over the state of the global economy mounted.

Ed Sheeran and Camila Cabello for ITV’s ‘Concert For Ukraine’

Ed Sheeran and Camila Cabello for ITV’s 'Concert For Ukraine'