Could Trump be charged for not turning over presidential records? 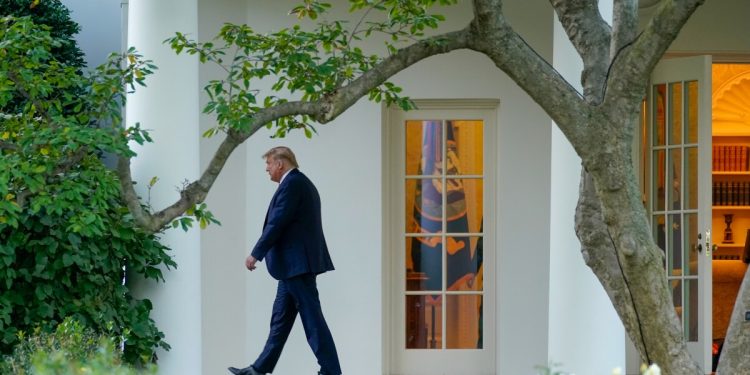 Trump confirmed the return of the documents in a statement Thursday calling it “routine and “no big deal.” But the National Archives and Records Administration has reportedly asked the Justice Department to investigate and determine whether charges are warranted.

The Justice Department did not return e-mails seeking more information, but the Archives said in a statement that Trump representatives continue to search for additional records that should have been delivered to the national archives more than a year ago under the Presidential Records Act. The Archives had worked with the Trump team throughout the year to locate the missing documents, according to the statement.

The House Oversight and Reform Committee also announced Thursday it will investigate the matter in a letter seeking information from U.S. archivist David Ferriero.

According to the Congressional Research Service, anyone who engages in the “unlawful removal or destruction of government records” is subject to punishment under Title 18, Section 2071 of the U.S. Code. That punishment is a fine, up to three years’ imprisonment and having to “forfeit his office and be disqualified from holding any office under the United States.”

But will he be charged… who knows?

Trump’s penchant for ripping up documents and not following the spirit of the record retention law was public knowledge for much of his administration. Prosecutors would have to prove that Trump withheld or destroyed specific documents willfully and intentionally now to keep them from becoming public.

No president has been charged with violating the act, and doing so for the first time would potentially open up a whole host of legal issues, including whether if convicted, he would be able to run for the office again.

The Constitution lists just three qualifications for being president: be at least 35 years of age, a natural born citizen and live in the United States for at least 14 years. So the question becomes can Congress just add an additional requirement of essentially, “don’t destroy government records”? You can bet it would be litigated… thoroughly.

What is a presidential record?

All presidential records belong to the American people under the Presidential Records Act, which Congress passed in 1978 in response to President Nixon’s handling of White House recordings documenting his and others’ actions around the Watergate break-in. Before then, presidential records were considered a president’s personal property.

Presidential records are defined as historically relevant materials created by or for the president as part of carrying out the duties of the office. That includes computer files, paper, photos, video or audio recordings. So traditionally, letters from foreign leaders, logs of who called the Oval Office, schedules, notes from meetings, draft speeches, etc., are all presidential records. (The Washington Post reports that the boxes contained correspondence with North Korean leader Kim Jong Un as well as a letter left for Trump by President Obama, both of which would normally have been turned over to the Archives.)

Diaries or journals and campaign materials meanwhile are personal records.

But here’s the crux; under the act the president gets a lot of say over what is turned over, and there is pretty much nothing the Archives can do to enforce the law.

To prove a violation under the Presidential Records Act, prosecutors would have to prove the person intentionally mishandled the material or was grossly negligent in doing so, not that it simply was swept up in the rush to get out of the White House. And the Biden Justice Department might not want to take on investigating the prior administration.

But is the bar higher for classified materials?

While the Justice Department might be leery about going after a president for taking home some letters he shouldn’t have kept, it has been more willing to go after government officials accused of mishandling classified material. (See: The Justice Department’s investigation into Hillary Clinton having classified information on her personal email as secretary of State.)

Still, proving anything nefarious could be difficult. Presidents have a lot of discretion to declassify something and don’t necessarily have to do it publicly. Normally declassifying something involves a lengthy review to make sure the president is presented with evidence about its potential impact on national security, but that process doesn’t have to happen.

Have presidential records left the White House with the president before?

Yeah. Despite a fairly rigorous process that is supposed to be followed when a new administration comes in, several presidents have left the White House with a few things that don’t belong to them and the National Archives had to retrieve them or they ran afoul of the law in other ways. Presidents receive a lot of gifts from foreign leaders, for example. Technically those gifts belong to the American public and aren’t supposed to stay with the first family. (For example, former President Clinton had to return some gifts and furniture from the White House.) Usually it’s treated as a misunderstanding and the items are returned.