Could you afford an unexpected but essential £850 expense now? 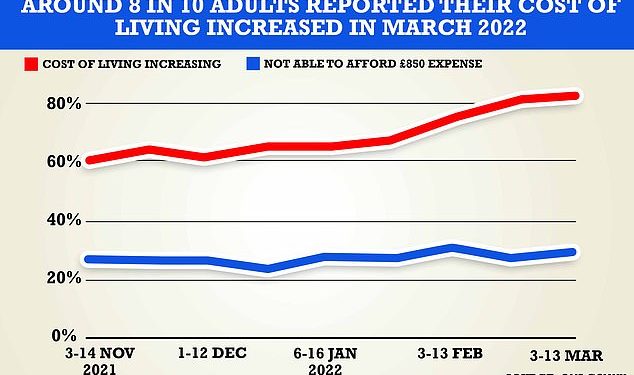 
More than 80 per cent of adults in Britain reported a rise in the cost of living this month, as inflation pushes up the cost of everyday essentials like food and fuel.

In November 2021, 62 per cent said they had experienced a hike in the cost of living, according to the Office for National Statistics.

Additionally, 29 per cent of adults revealed they could not afford an unexpected but necessary expense of £850 at the moment.

Certain people, including those who are renting a property or are divorced, are more likely to be unable to afford this sudden expense – which, for example, could be the cost of fixing a car problem or a boiler – the findings suggest. 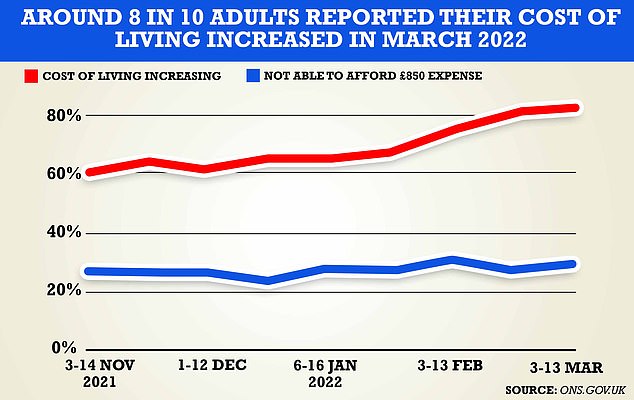 Could you afford it? Around 29% of adults revealed that they could not afford an unexpected, but necessary, expense of £850

The ONS said: ‘The measure of households who are unable to afford an unexpected, but necessary, expense of £850 provides an indicator of financial vulnerability and helps identify households that may not be able to absorb a cost of living increase.’

The research found that some groups were more likely than others to be left unable to afford an unexpected £850 expense.

It said: ‘Adults on the lowest incomes, those renting their homes or those with no formal qualifications were most likely to report they could not afford this unexpected expense.

‘Analysis also found that parents of dependent children, adults who were divorced or separated, disabled adults, and those living outside of London, the South East and South West were more likely to report they could not afford this unexpected expense.’

Around 39 per cent of disabled adults surveyed said their household could not afford an unexpected expense, compared with around 24 per cent for those who were not disabled.

Could you afford an unexpected but essential £850 expense?

Adults with a personal income of less than £20,000 per year had over eight times higher odds of reporting that their household could not afford an unexpected expense than adults with an income of £50,000 or more per year.

Plus, adults in all other income groups below £50,000 were also significantly more likely to report that they could not afford an unexpected expense than adults with an income of £50,000 or more per year, according to the ONS.

In early 2022, an increase in the price of food shopping (90 per cent), gas or electricity bills (79 per cent) and the price of fuel (71 per cent) were the most common reasons reported by adults who said that their own cost of living had surged. 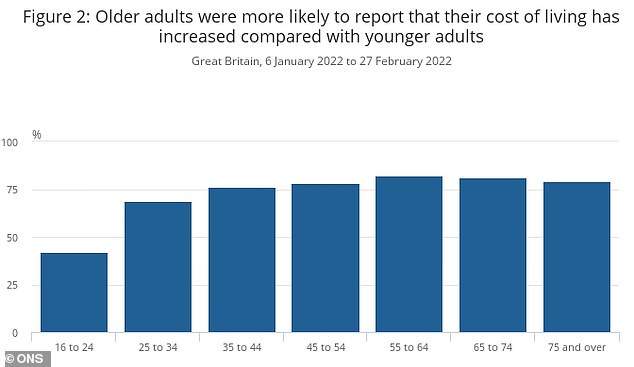 Going up: Older adults are more likely to have reported a rise in the cost of living, the ONS said 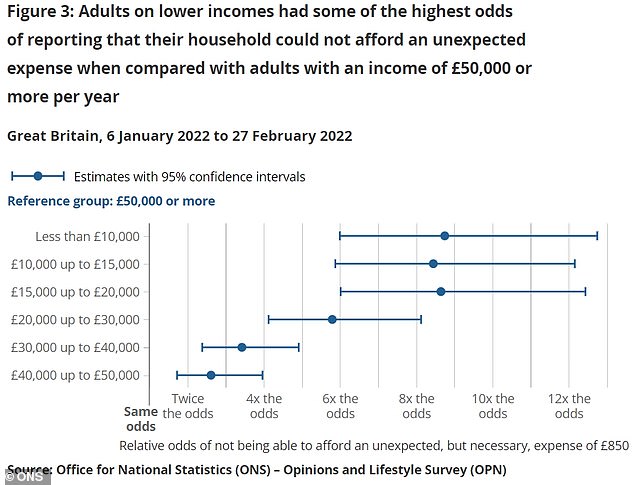 Odds: Those on lower incomes face a higher risk of struggling with unexpected expenses 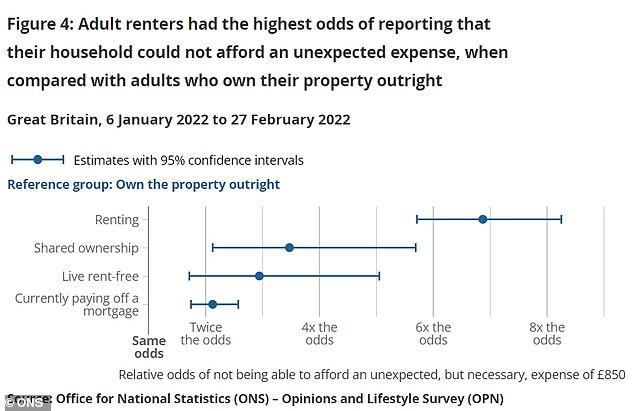 Variations: Renters had a high chance of not being able to afford an unexpected £850 expense

Myron Jobson, a personal finance analyst at Interactive Investor, said: ‘The ONS data lays bare the true scale of the cost of living crisis which has laid waste to household budgets.

‘Prices are rising at rates we have not seen in decades and keeping a lid on spending is now becoming a daily battle for many – especially for the nation’s most cash strapped individuals who simply do not have any more wriggle room to tighten their financial belts further.

‘The fact that three in ten of UK adults cannot afford an unexpected, but necessary, expense of £850 suggests that many have already raided their cash buffer pots to maintain financial buoyancy – and as lockdown savings evaporate, this figure could climb higher.’

Since the start of the year, many people have stated to take action to try and counteract the rising cost of living.

Over 30 per cent said they had tried to stop using as much gas and electricity at home, while the same proportion have even been cutting back their spending on essentials like food.

Inflation is rising at its fastest rate for around 30 years as fuel, energy and food costs soar.

The steep rise in the cost of living has put increasing pressure on households across the nation.

In the 12 months to February, prices rose 6.2 per cent on average.

But, according to the Office for Budget Responsibility, inflation could reach a 40-year high of around 8.7 per cent in the final three months of this year.