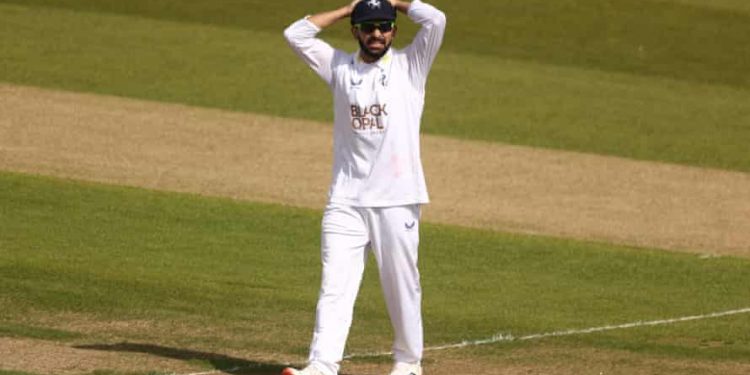 
Ball one: Overton over 90mph (probably)

Surrey went top of Division One after swatting aside many judges’ pre-season favourites for the title, Hampshire, by an innings.

On as hot and sunny a day as one could wish for in the middle of April, James Vince did a Tim Paine 2019, saw the green tinge to the pitch and over-thought his election to bowl. Once Ryan Patel played a few shots and Hashim Amla had a bit of luck, one felt the die was cast. So it proved.

For all Ollie Pope’s smooth progress on Thursday (though he was curiously hesitant on Friday) and Will Jacks’ clean hitting – the sound alone was enough to know the ball was over the boundary – maybe the new England regime will be more interested in a familiar name. Or half a familiar name, because Jamie Overton bowled very fast indeed, hurrying up some experienced players with his pace and bounce. With Mark Wood and Jofra Archer being broken on the back of England’s schedules, Overton J, nine years on from his first call-up but still only 28, might just have what Overton C has failed to display in an England shirt.

Craig Overton remains a mighty presence at domestic level, but even his 13 wickets could not prevent Essex from condemning Somerset to Division One’s basement in a thriller at Taunton.

All looked lost for the home side after another two full innings had failed to realise 200 runs, Essex needing just 84 to wrap up the victory. But my phone wasn’t the only one bleeping with insistent WhatsApp notifications, as Overton and Peter Siddle, jagging the ball off a seaming pitch, had Tom Westley’s serial winners 4-4 and game was very much on.

As outstanding teams do in all sports, Essex found an unlikely hero, a man who, until a fortnight ago, was expecting to be keeping and captaining for Northants but was now batting for Essex. Adam Rossington’s ship-steadying 29, the last three balls in the company of No 11 Mark Steketee (an Australian who is undergoing a crash course in what the County Championship means to English cricket) was enough to get his new team over the line in the outstanding match of an outstanding round of matches.

Lancashire and Yorkshire both enjoyed successful starts to their campaigns, but neither of the northern powerhouses had things all their own way.

Your correspondent had spent some time in the very decent crowd at The Oval watching Surrey and Hampshire, but punting the Red Rose for another pennant 11 years after their last success, partly on the belief that no tail will last very long against Saqib Mahmood and Matt Parkinson. So, cricket being cricket …

Mahmood was absent at the behest of whoever was making the decisions at the ECB, but Parkinson was in scintillating form, building his ever-expanding Shane Warne tribute reel with deliveries employing the flight, dip and rip that really should be the spinner’s stock-in-trade. He even “held an end” (a phrase I never want to hear again under England’s reseted reset), going at barely two per over.

But Ben Compton was still there, backing up his bat-carrying century in the first dig finding company in Hamidullah Qadri, the Kandahar conjuror, who summoned hitherto unseen skills and concentration in a career-best 77 for Kent. With last man Jackson Bird inspired to bat for an hour, Lancastrians heaved an enormous sigh of relief when Compton was last man out, deep into his 15th hour of batting in the match. Twenty minutes of play later, the win points were heading back to Manchester along with some very tired bodies.

It was a fine team performance, with five bowlers among the wickets with only Test batters, Marcus Harris and James Bracey (oh yes he was, and he might be again soon), mustering more than 40.

But Goughie’s cheeks will be reddening with pleasure most at the contribution of Harry Brook, who underlined his potential with 101 in the first innings and an undefeated half-century to seal the chase of an awkward 211. At 23, Brook is beginning to put together consistent performances and, while he will face stronger attacks than Gloucestershire’s in the coming weeks, it’s a good start to what promises to be a crucial season for him.

Ball five: Haines has the head and heart for Test cricket

Another 23-year-old in the England conversation is Sussex’s Tom Haines, one of this column’s five county cricketers of the year 2021.

He had lost the toss against Derbyshire, and looked on as Shan Masood helped himself to 239 and Wayne Madsen added 111 (bowled Haines), before his own side lost nine wickets for fewer than 100 runs and he was padding up again. He did not take them off for nearly 11 hours.

Haines made 243 and debutant Cheteshwar Pujara added 201 to bat out two days and secure the draw. Derbyshire’s attack may not be international class, but Haines is showing the mental fortitude required to lead a struggling team, resist scoreboard pressure and back up a breakthrough season – much of what is required of a Test batter.

Glamorgan secured the only win of the round in Division Two, beating Nottinghamshire, the only winners last week.

There is a strong Australian connection in Wales this season and 18 of the 20 wickets required for the victory were taken by Michael Neser, Michael Hogan, Timm van den Gugten and Marnus Labuschagne (whose friendly bouncers amused his Test captain, Patrick Cummins).

Ben Duckett can feel somewhat aggrieved that his 122 and 95 were wasted in a losing cause, but the match really turned on Nottinghamshire’s bowlers letting Glamorgan squirm away from 88 runs in arrears with four first-innings wickets left to a 77-run lead. At the age of 40, Hogan knows not to look that gift horse in the mouth. He knocked over both openers for ducks and that opened the door to what proved a comfortable seven-wicket win and an early season perch on top of Division Two.