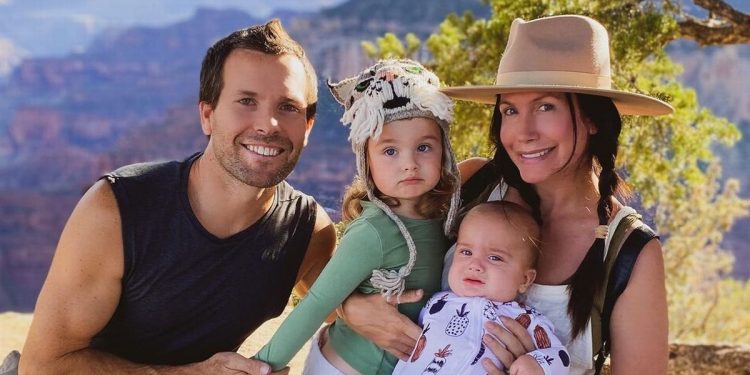 Channon Rose’ husband was fired from his job after his bosses found out she was an ex-porn star – leading the couple to move into a van and start posting vlogs for a living.

Channon, 36, from Los Angeles, California, USA, had a hard childhood. At eight years old, her parents divorced and her father remarried a woman who went on to physically and emotionally abuse Channon.

Suffering from mental health issues as a result of the abuse, Channon found herself involved in prostitution, while still a minor, before turning to stripping when she turned 18.

However, Channon wasn’t fulfilled with her career. What she really wanted was to start a family – so she created a profile on a dating website, where she met her now-husband, Travis Dean, 44.

After Travis’s family found out about Channon’s past, they disapproved of the relationship – even firing him from his job at the family business when he refused to leave Channon.

However, he was undeterred and deeply in love, so the pair decided to try and make a living from posting vlogs on YouTube.

As the couple tried to grow their family, they documented their fertility struggles on YouTube, eventually growing an audience of over 1million subscribers.

After years of struggling with fertility, and experiencing miscarriages and failed IVF, Channon and Travis were lucky enough to have two children – Snow, 3, in 2018 and baby Storm in March 2021.

Thrilled to have a family, Channon began to follow her other dream – travelling.

With a large following on social media, the couple saved up to buy an RV and decided to take their family on a journey across the United States, documenting the trip on Instagram and YouTube.

With two young children, the couple have faced some restrictions on their adventure, as their newborn requires constant care – but that hasn’t stopped them.

“We decided to work for ourselves, and we’ve been doing YouTube ever since.

“Travis helps me with filming, and now that we have kids, he helps take care of the kids while I film videos.”

Discussing their fertility journey, she adds: “We tried for years to get pregnant – we went through miscarriages and ectopic pregnancies. After years of IVF, we now have two beautiful children, and I’m living my dream.”

After finally starting a family, Channon and Travis decided to follow another of their dreams and began to experiment with the van lifestyle.

“I’ve always loved the idea of travelling– so we decided to travel the USA in an RV, because there is so much here we haven’t explored yet,” Channon said.

“When we’re travelling from one place to the next, we drive about two to three hours at a time. That way we don’t have to go too far, as the kids are in car seats.

“Then we either stay overnight at an RV resort or boondock. We like to stay in RV resorts if we can, because they’re the safest option and we have access to electricity, water and WiFi.

“We have boondocked, which isn’t as safe, but is very beautiful and secluded.”

She added: “It’s hard travelling for long periods of time with two young children in car seats. I’m constantly changing diapers, feeding them or trying to get them to nap.

“There are always going to be people out there that don’t agree with that we do – we had someone tell us that we wouldn’t last long on the road because our toddler wouldn’t like being cooped up in the RV.

“I just let them know that our experience is different, and we make sure our kids are in an environment that they are thriving in.

“If at any point, our kids hated this, then we would go home – but right now they are loving this life, and so are we.”

Sharing their journey on their social media allows Channon and Travis to achieve their dreams, and they are forever grateful for the opportunity.

“I’m hoping to inspire other people to do the same if they’re interested in this life,”

“We love reading people’s positive comments. Unfortunately, we get trolls who love leaving negative comments, but we try to ignore them, as we know they are projecting their own hurt on us.

“I feel so much gratitude for every comment, whether negative or positive, because they allow me to live my dream life.”