Coursera’s Jeff Maggioncalda: ‘Now we can go after the best people’

Jeff Maggioncalda has embraced a new title — the “nomadic CEO”. It wasn’t always this way. Before pandemic lockdowns closed the California headquarters of Coursera, the online learning platform he has led since 2017, he spent plenty of time at the office.

But the onslaught of coronavirus and the need to work from home persuaded him to develop a permanent “work from anywhere” policy and adjust his leadership style.

The company, which was founded in 2012 by two Stanford professors and offers a vast range of courses from short programmes to masters degrees and MBAs, closed its Mountain View offices in March 2020 as a result of lockdown and a few months later, in September, employees were given the option to work where they wished, forever.

“Before we shut the offices I was talking to my head of [human resources] and I said if we have to shut these offices we’ll never be able to force people to come back in,” says Maggioncalda, 53. Speaking in a bustling London coffee bar, he is enthusiastic about the flexibility he has offered to Coursera’s employees. But he concedes he would probably have had to do it at some point anyway given the battle for tech talent.

“There is such intense competition for engineering talent in Silicon Valley, that anytime a company comes up with a new type of benefit that the engineers like, they basically force all the other companies to adopt that benefit,” he says. If just one of the big tech companies such as Google or Facebook say you don’t have to come back to the office, “as soon as they say that our engineers are going to say, ‘Why do I have to come back?,’” he adds. 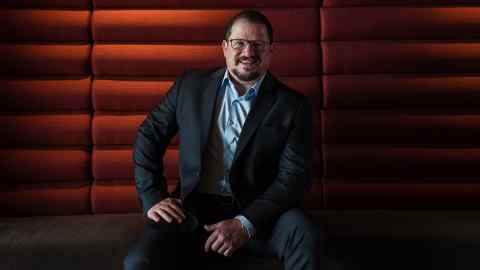 The executive team led by example and immediately left the head office to live wherever they wanted to be. One went to New York, one went to Chicago, and another went to California’s El Dorado Hills.

There were other reasons for Maggioncalda’s decision, though. While the policy began as a staff retention plan, it was quickly apparent it would be instrumental in widening Coursera’s access to new talent. “We’ll be able to hire the best people anywhere in the world, so . . . the global talent pool was the biggest reason . . . now we can go after all the best people in the world,” not just those within commuting distance of Coursera’s offices.

The policy, he believes, has also allowed the company to improve equity and diversity within its ranks. In the US, more than two-thirds of the employees Coursera hired in the first half of 2021 were not close to an office. Of those, 41 per cent identify as Black/African American, or Latinx. Maggioncalda believes this has substantially improved representation in its workforce within 12 months. “And it was very intentional.”

“This is our chance to become a much more diverse workforce before we get too big,” he says. While he does not want to claim Coursera is no longer hindered by homogeneity, he believes that when a company can attract people from anywhere, offer flexible work and has a diverse workforce, “it’s a very important strategic recruiting advantage”.

Maggioncalda had a modest upbringing in Pacifica, a small beach town just outside San Francisco. He attended Stanford University both for undergraduate study, and later, in 1996, completed an MBA at its business school.

That same year he joined Financial Engines, a start-up online investment manager, as its first employee. As founding chief executive, he took the company public in 2010. He effectively retired in 2015, still only 46, and went travelling with his wife.

But a headhunter he knew well came to him with the potential opportunity to lead Coursera. He got the job and further travel plans to Machu Picchu and Antarctica were cancelled, with his wife’s approval, since she was already a fan of the learning platform.

Having been lured out of retirement, Maggioncalda took Coursera public in March 2021. It initially traded at $39 a share that rose in days to a $62 high, but the price sunk to a $16 low last month after a period of steady decline. Its early market capitalisation of $5.9bn has since halved to $3bn. But Maggioncalda says this reflects wider downward trends in the markets among growth companies — and other edtech groups announcing disappointing earnings — rather than Coursera’s own performance as a company.

As of the end of 2021, Coursera had more than 90mn registered learners compared with 30mn in 2020. Its competitors include Udacity and edX, which have about 19mn and 42mn registered users, respectively.

The next phase of Maggioncalda’s working from anywhere policy includes deciding on what to do with Coursera’s offices and how to make a distributed workforce feel they belong.

On offices, he does not intend to eliminate them, but closely watch how Coursera’s staff use the physical space available to them. He believes the office has a crucial role in his company’s culture but anticipates space will be reduced in the mid to long term. The focus may be more on hubs for employee clusters in major cities. Such hubs may have collaboration space for Coursera’s employees, “but then I think there’s got to be social spaces and those are probably mixed with other companies . . . It’s the social vibrancy . . . I think that’s what people are going to want.”

Maggioncalda says social integration is essential, otherwise it may become harder to hang on to employees, with jobs becoming too transactional and too easy to switch between.

Who is your leadership hero?

Indra Nooyi, the former PepsiCo chief. She’s a trailblazer who ran one of the largest companies in the world in a style that was unique and uniquely effective. I’ve been fortunate to meet with Indra a few times. I aspire as a leader to bring Indra’s approachability, candour, pragmatism, customer focus, wisdom, and heart to my own leadership style.

What was the first leadership lesson you learnt?

When I was first a CEO, I gave a big speech and it was kind of like ‘we should be better than this’ . . . my head of investment services said, ‘that was a lousy speech, it doesn’t do it for me’. I asked him what he meant. He said: ‘What I really get motivated by is inventing something new, not feeling like ‘oh we could be doing better’. Then I realised if I want to motivate people, I’ve got to realise they are motivated by different things. I had to speak to what they need, not the way I think. The bottom line is, it’s not about me. People are really different — and that’s really good.

What would you be doing if you weren’t a CEO?

I’d be travelling. Which is what I’m doing, and I’m a CEO. I can’t believe how lucky I am.

Maggioncalda says companies “need to get really good at onboarding”. If they can’t do this, “you’ll forfeit so many reasons why people stay in a job. And you don’t want a lot of turnover.”

He thinks Coursera has done well in bringing people into the company from anywhere in the world, ensuring they can access the information they need to do their job via online guides. In the pre-pandemic office, key information around values and processes may have been passed on verbally or by osmosis. Coursera’s guides are a way of getting this information out of people’s heads, says Maggioncalda, and into one accessible place, covering topics such as how Coursera does meetings and performance reviews.

Maggioncalda wants to ensure managers adjust their style so they can take time out to get to know team members. One-on-one meetings are important. And “we really go for open agendas . . . you know, ‘how are you doing?’, ‘how’s your job?’, ‘how’s your life?’ . . . Large Zoom meetings are not a good way to learn about someone’s life,” he says.

He still has concerns, though. “Burnout and work-life balance are two of the big challenges that we need to really address as a company,” he says. “And if we don’t address it effectively I think our turnover will be high . . . We’ve got to continue to figure that out.”

Maintaining innovation is another worry. “[It] often comes from different viewpoints connecting in non-obvious ways and it comes from visual thinking when you’re in a room together,” he says. “We’re going to have to think about ways to facilitate this kind of breakthrough innovation.”