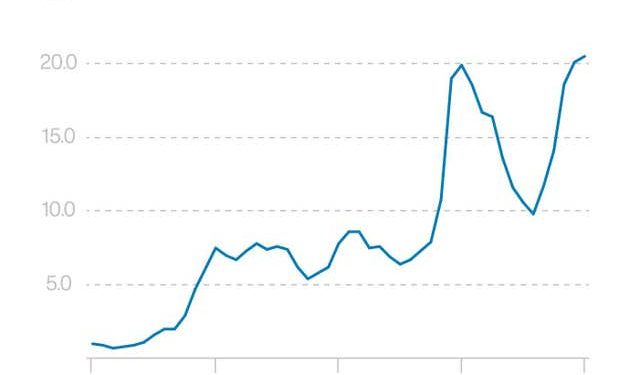 The rate of Covid-19 hospital admissions in England has passed the peak reached at the start of this year and is now the highest since January 2021, new figures show.

Admissions among older people are continuing to drive the increase, with all age groups over 65 recording rates last seen during the second wave of the virus in the early weeks of last year.

By contrast, rates for children and young adults are still well below the level reached at the beginning of 2022.

The overall Covid-19 hospital admission rate for England stood at 20.5 per 100,000 people in the week ending April 3, according to the UK Health Surveillance Agency.

It is the fifth successive weekly increase and means total admissions are now running at higher rate than at the peak of the original Omicron wave at the start of January this year (19.9).

But the steady rise in recent weeks is another sign of the impact of the latest surge of infections, which is being driven by the Omicron BA.2 variant.

The number of people in hospital seriously ill with Covid-19 remains low, however.

Some 317 patients are currently in mechanical ventilator beds, according to the latest figures from NHS England – some way from the level reached at the beginning of this year (797) and far below the total at the start of 2021 (3,736).

Separate data published on Thursday shows that nearly three in five patients in England (58%) who have tested positive for Covid-19 are being treated primarily for something else – the highest level so far.

The proportion of patients who are in hospital “with” Covid-19 rather than “for” it has been rising steadily since the end of last year, when the figure stood at around 25%.

But all patients who test positive for coronavirus have to be treated separately from other people in hospital, adding to pressures faced by NHS staff who are already trying to clear a record backlog of routine treatment.