Mothercare sales remain significantly below pre-Covid levels and the retailer has warned that it may take ‘a number of seasons’ for consumer confidence to return.

The London-listed company, which no longer has stores in the UK but has a franchise operation overseas with 800 shops, has also said the closure of its 116 Russian stores will continue to take a toll on its performance.

Its unaudited results show franchisee retail sales rose by 7 per cent to £385million in the past year, of which nearly a quarter, or £88million, came from Russia. 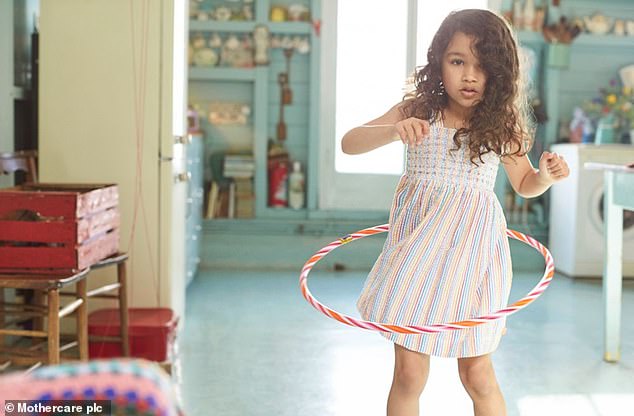 Mothercare saw sales edge higher compared to 2020, but they are still below pre-pandemic

Store sales are still around 25 per cent down compared to the year before the pandemic, while online retail sales – which make about 10 per cent of the total, remain above pre-Covid levels.

The group said it does not know when it will be able to reopen its Russian operations and the cash shortfall means it will not be able to pay money to plug its pension black hole this month.

However, it expects adjusted profit before nasties to come in ahead of analysts’ expectations of between £11.5million and £12million – of which £5.5million is from Russia.

In the current financial year, the company expects to take a £6million hit from the suspension of its Russian operations but operating profit to still exceed £10million, excluding contributions from the country.

‘We approach the new financial year with a degree of cautious confidence, notwithstanding that we have completely excluded Russia from our forecasts given the uncertainty around when stores may reopen,’ the company said.

‘Our Russian franchise partner has continued to pay the salaries of the team in full despite the suspension of sales in the market.

‘We are making the necessary adjustments to our cost base to maintain our service and costs for our franchise partners and this financial year will potentially be impacted by the timing differences as we adjust our cost base.’

Mothercare shut down all its remaining UK stores in 2020 after nearly 60 years of trading, with the loss of 2,500 jobs. Customers in Britain can still buy some of its products in Boots.

The group, which is trying to turn its business around by upgrading its offering, said its first revamped range launched in January had been well received, but noted that challenges remained.

‘The initial feedback has been very positive but we are aware that many of our territories still face challenges including ongoing Covid-19 restrictions and the need to clear old inventory from previous seasons as a result of supressed demand,’ the group said.

‘We also appreciate that it may take a number of seasons for consumer confidence to return and thus sales to fully reflect the enhanced ranges. It is therefore difficult at this early stage to project forward and quantify the resultant impact on retail sales.’

Mothercare shares were down 1.5 per cent at 10.7p in morning trading.

Cindy Williams’ step-daughter Kate Hudson is estranged from her father

Cindy Williams’ step-daughter Kate Hudson is estranged from her father