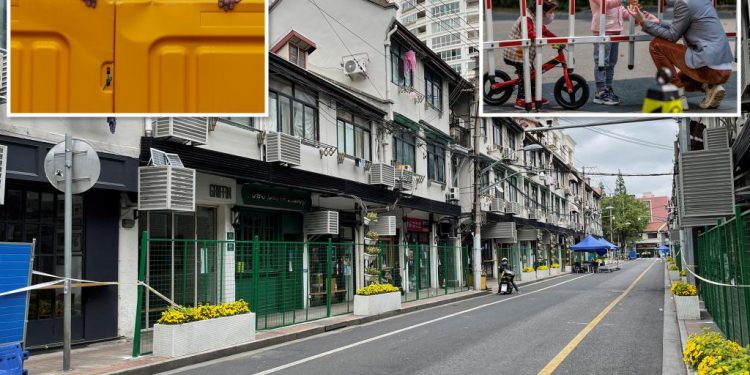 Shanghai authorities erected high fences outside the homes of residents who tested positive for COVID-19 this week, prompting outcry on social media that people were being treated like animals amid the city’s harsh lockdowns.

Images and videos of workers in hazmat suits fencing off buildings with 6-foot-tall green metal bars made the rounds on the Chinese social-media site Weibo, where users also complained the structures were fire-safety hazards.

“This is so disrespectful of the rights of the people inside, using metal barriers to enclose them like domestic animals,” a person said.

Many of the metropolis’s 25 million residents have been shut in as China doubles down on its “zero COVID” policy. Nearly 40 people died of the virus in Shanghai on Saturday, the city’s highest numbers since it imposed its lockdown amid the spread of the highly transmissible Omicron variant.

“Isn’t this a fire hazard?” a different Weibo user asked while referencing the imposing green fences.

In some videos, residents are seen yelling at the workers putting up the fencing, and in one instance, were successful in blocking construction.

Reuters reported seeing the fences on the streets in Shanghai on Sunday and said the barriers are being placed in the city’s “sealed areas” — a designation for buildings where one or more people have tested positive and where neighbors are barred from leaving their front door. Those who test positive are sent to quarantine centers.

The fences come as residents appear to be growing increasingly angry at the government for its harsh quarantine rules and are emboldened to voice their discontent despite censorship.

A 6-minute video called “The Voice of April” — which showed a panorama of the city’s empty street and featured voices of locals complaining about food and medical shortages — was shared by many netizens before it was censored.

After losing his job for praying on the field, ex-high school football coach brings case to Supreme Court – CBS News