Covid UK: A THIRD of infected victims now die primarily from other conditions in England and Wales 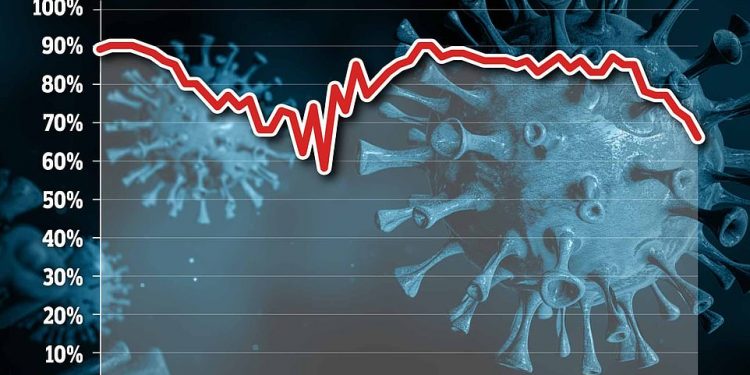 
A THIRD of Covid victims now die primarily from other conditions in England and Wales, official data shows

A third of recently registered Covid deaths in England and Wales were people who died primarily from another illness, official figures show.

A total of 1,242 people had the virus on their death certificates in the week ending February 4, according to latest Office for National Statistics (ONS) data. Of them, Covid was the underlying cause of death in just 817 cases (66 per cent), although it may have been a contributing factor in more.

The share of fatalities mainly caused by the disease has been trending downwards for weeks after the arrival of the milder Omicron variant and the accelerated booster vaccine programme.

Covid was the primary cause of more than 80 per cent of deaths at the end of November when Delta was the dominant strain.

The same trend has also emerged in hospitals, where up to two-third of inpatients with Covid in some regions are not primary being treated for the virus.

Latest NHS England data shows there were 10,689 patients in hospital with the virus across the country at the start of February, of whom just 48 per cent were mainly ill with Covid. In London, the share was just 33 per cent, while in the East of England it was 40 per cent and 49 per cent in the Midlands.

The lower severity of the fourth wave has given ministers the confidence that even the most fundamental Covid restrictions can be lifted in England, including compulsory self-isolation for those who test positive.

Ministers are using the Parliamentary recess to draft their living with Covid strategy, which is due to be unveiled on February 21. 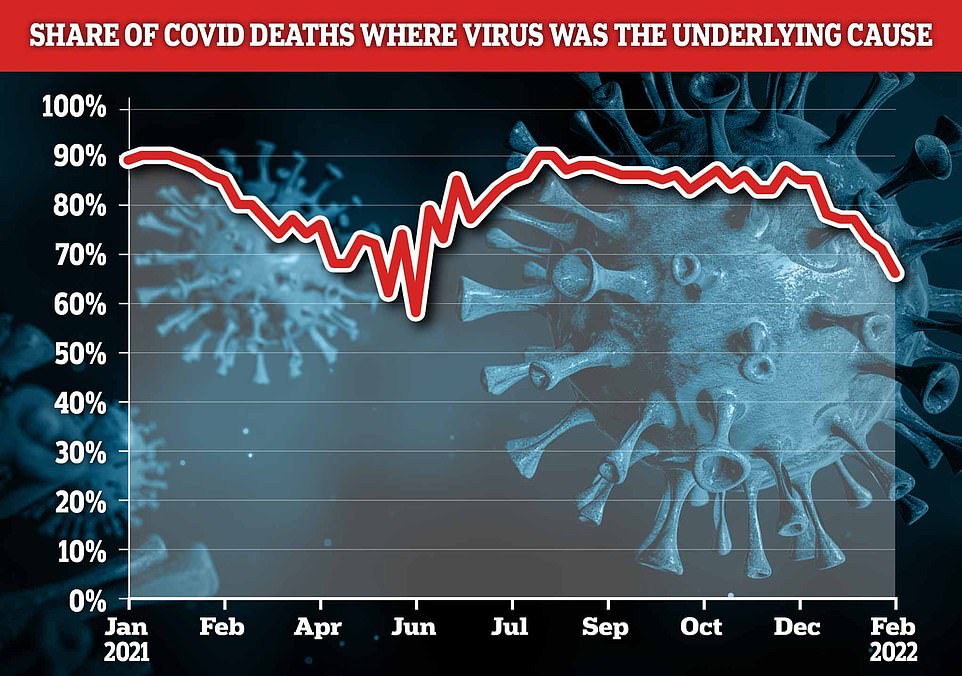 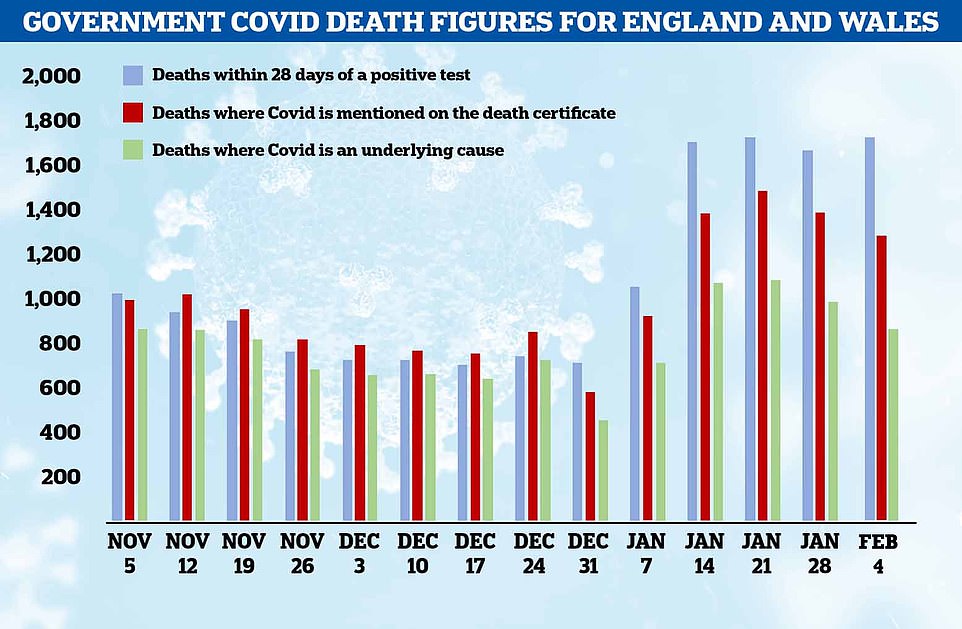 Free lateral flow tests are set to be scrapped in England from next month under the Government’s plan to learn to live with Covid, it was claimed today.

Leaked documents last month hinted that mass testing would stick around until at least July before being limited to care homes, hospitals and schools.

But Whitehall sources say the scheme could be ditched months earlier because the Treasury wants to slash annual Covid spending by 90 per cent — from £15billion to £1.5bn.

Free PCR tests could also be abandoned from March 31,  but may remain available to more than a million extremely vulnerable patients, as well as in hospitals.

Ministers are also considering scrapping routine contact tracing, according to the Guardian.

Boris Johnson has vowed to make England the freest country in the world after fears about the Omicron wave never materialised.

Covid cases, hospitalisations and deaths have been trending downwards for weeks, with just 41,648 infections, 35 deaths and 1,413 admissions logged yesterday.

Commenting on the reports, a No10 spokesperson said today that a ‘final decision’ on Covid testing has not been made. They added that it will come to an end ‘at the right moment’.

Overall, the ONS found there were 11,862 deaths registered in England and Wales in the most recent week, which is lower than normal at this time of year.

The 1,242 deaths with Covid mentioned on the certificate accounted for just 10 per cent of deaths from all causes, while underlying Covid accounted for fewer than 7 per cent.

Fatalities involving the virus were down for the second week in a row and fell in all regions in England, except for the South West and North East. Wales also saw a small rise.

Experts have called for the daily publication of Covid deaths to be scrapped now that Omicron is skewing the true number of people ‘from’ rather than ‘with’ the disease.

Since March 2020, the Government has released a daily fatality toll based on deaths within 28 days of a positive test to track the pandemic.

Critics have long complained it is a flawed dataset because it includes everyone who died in the weeks after they caught Covid, regardless of their cause of death — meaning theoretically even car crash victims can be included.

In the same week, to February 4, the Government’s Covid dashboard reported 1,625 death across England and Wales —  which is nearly double the true number of people who died primarily from Covid.

Professor Robert Dingwall, a former Government Covid adviser, has previously urged the Government to ditch the daily Covid statistics from the end of the month — when the remaining Covid laws are due to be abandoned.

Ministers are due to unveil their plan to live with Covid like flu on February 21 in the House of Commons after the recess.

Talks are ongoing between Cabinet ministers today, with the move to be put in front of Sir Chris Whitty tomorrow before being signed off.

According to reports this morning, mass testing, compulsory isolation and even routine contact tracing could all be gone by the end of March.

Commenting on the reports, a No10 spokesperson said today that a ‘final decision’ on Covid testing has not been made. They added that it will come to an end ‘at the right moment’. 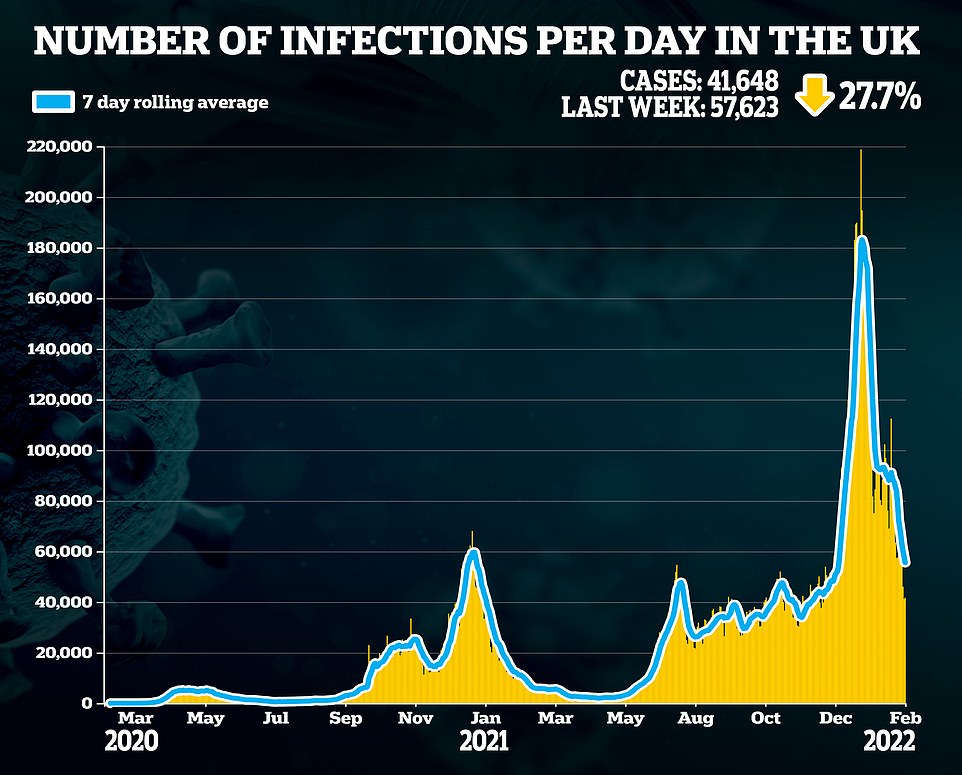 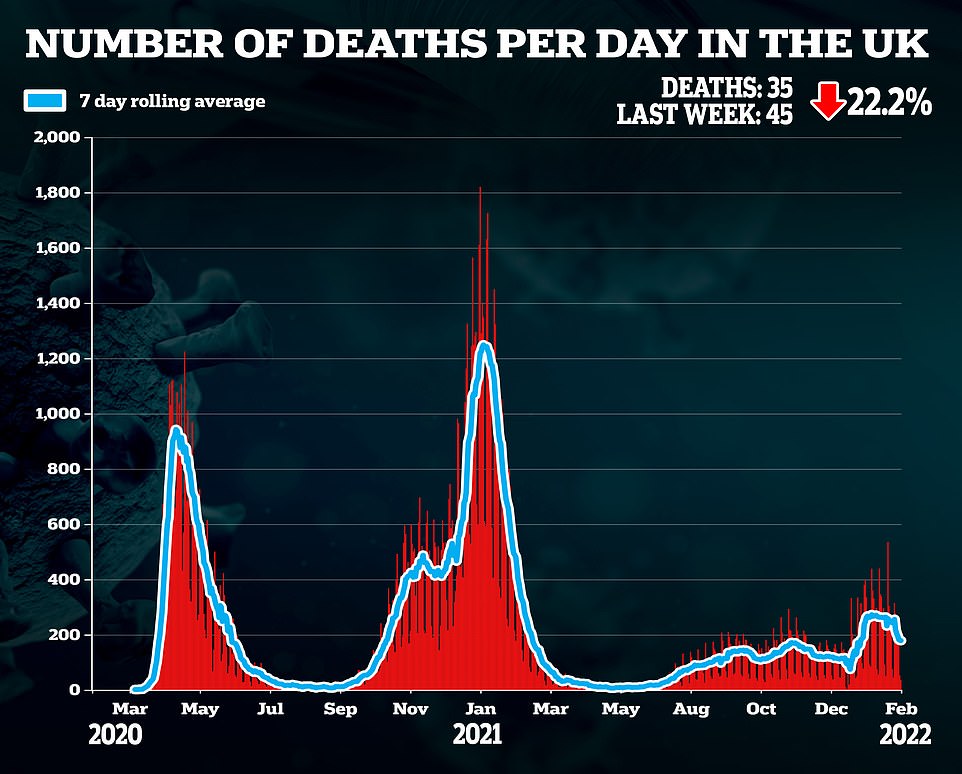 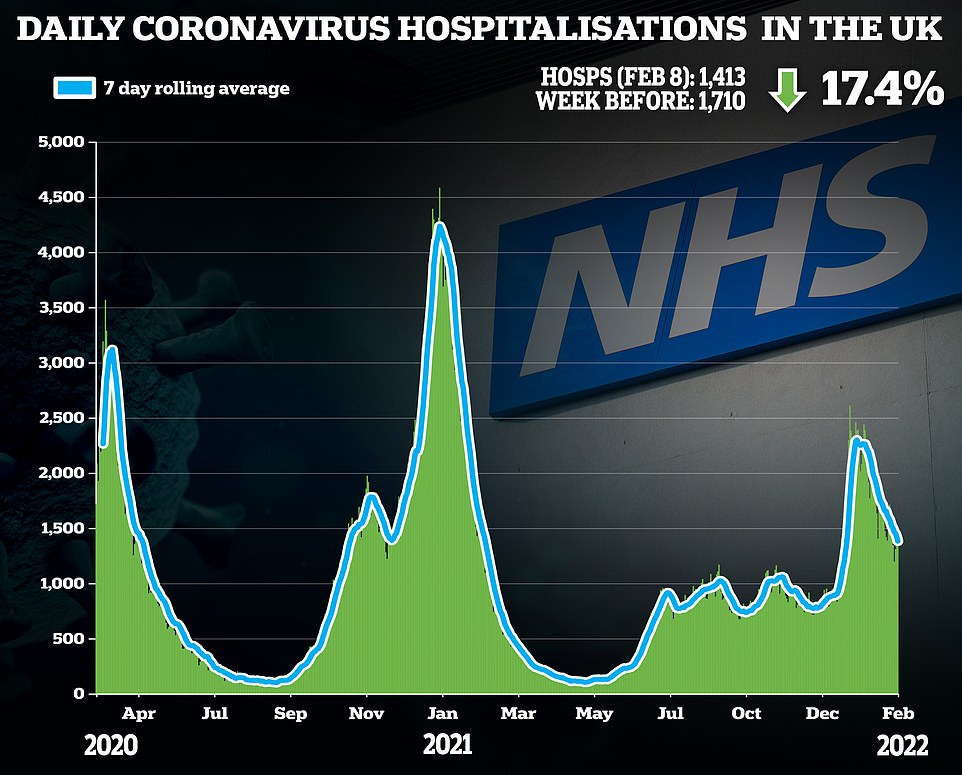 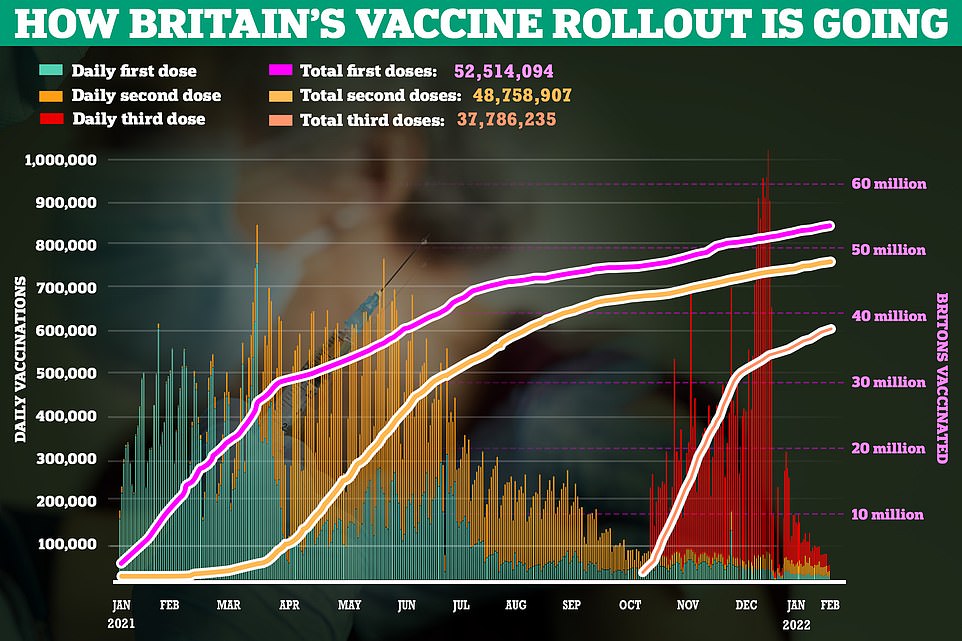 Boris Johnson told Parliament last week that the Government would press ahead with plans to live with Covid so long as the data continued to trend in the right direction.

Yesterday Covid cases dropped for the 13th day in a row, with 41,648 new positive tests recorded and there were a further 35 deaths, marking a 22 per cent fall in a week.

Latest hospital data also showed there were 1,413 admissions on February 8, down 17 per cent on the previous week.

‘We Were the Lucky Ones’