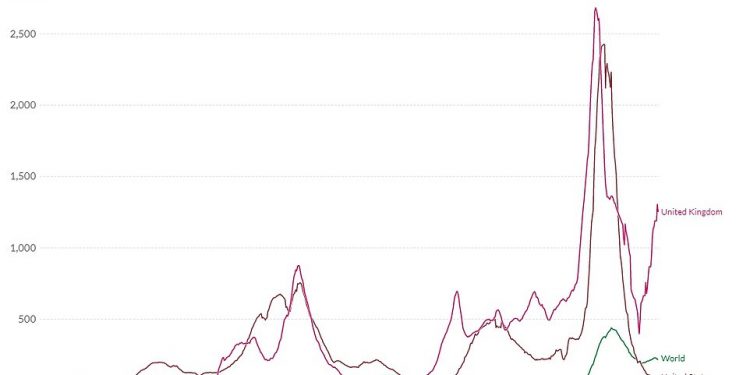 
The Omicron ‘stealth’ variant has captured headlines around the world in recent weeks as the highly transmissible strain – the most infectious of the pandemic yet – has many fearing yet another Covid surge could be around the corner. Experts are assuring Americans that things may not be as dire as some may believe.

Dr Jacob Lemieux, a instructor of medicine at Harvard Medical School in Cambridge, Massachusetts, said Tuesday that he does not believe the U.S. will suffer a large surge in Covid cases similar to what Hong Kong and some European nations suffered in recent weeks.

Instead, he predicts cases will slightly grow, but still remain at the extremely low overall levels the nation is currently experiencing.

Meanwhile overseas, the World Health Organization (WHO) is still issuing dire warnings of the impact the stealth variant can have, especially as pandemic-related masking and distancing mandates are being dropped. The organization reported Tuesday that global infections increased seven percent last week. 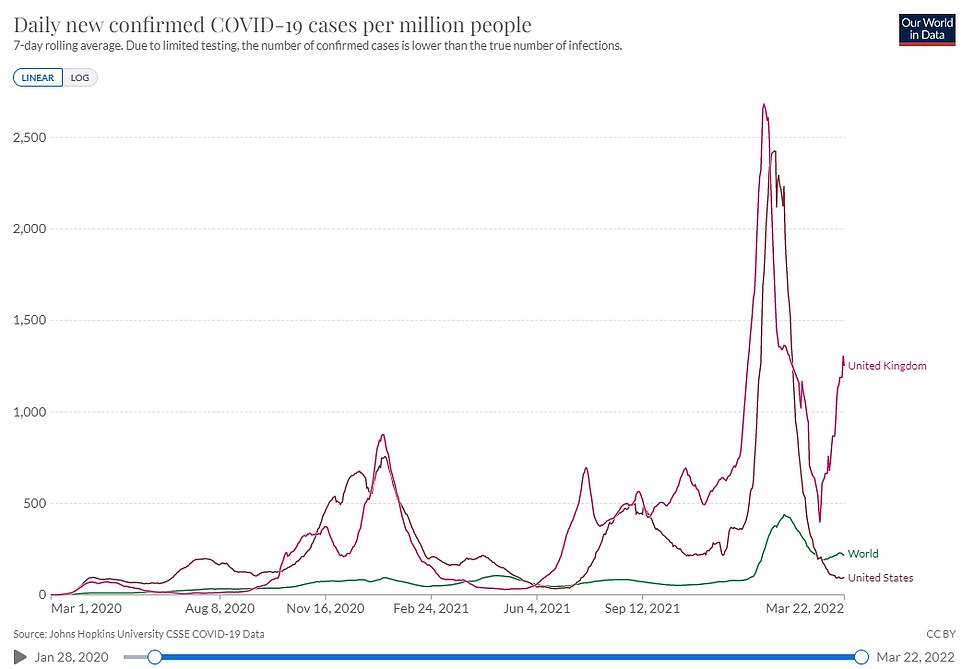 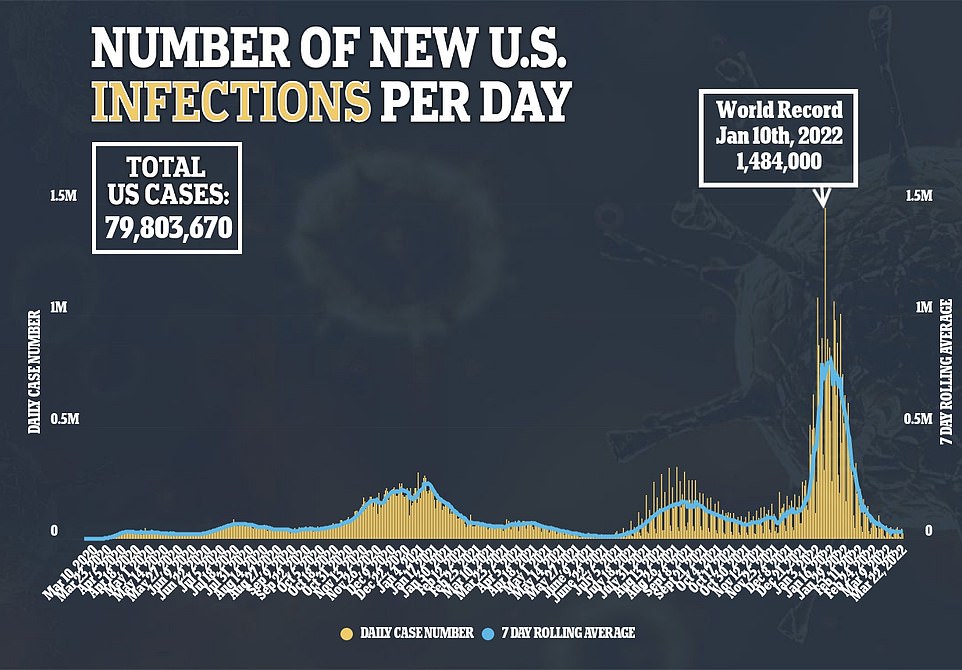 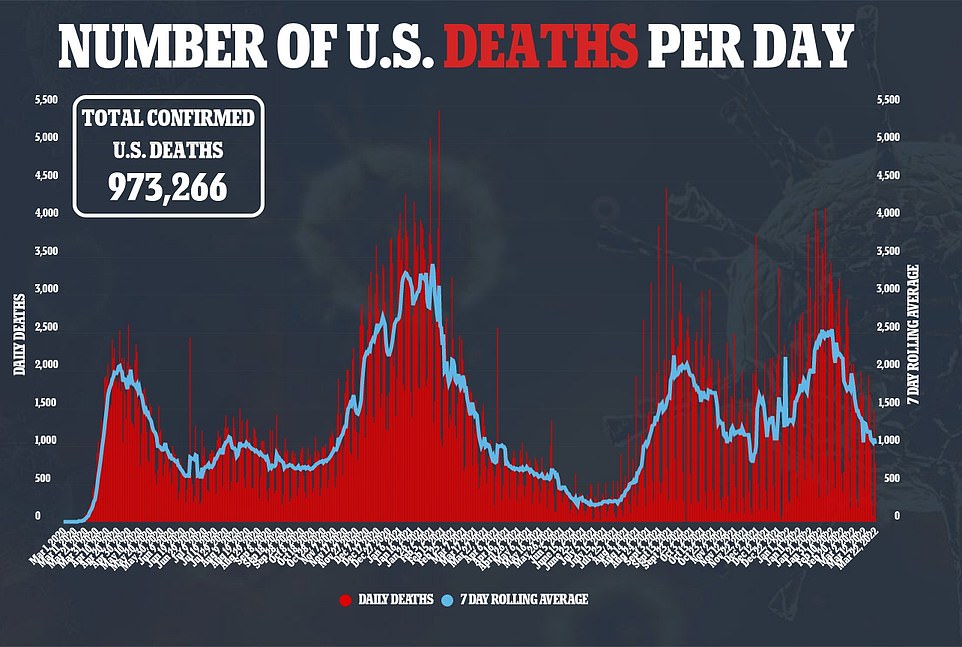 BA.2, the official title of the stealth variant, is a lineage of Omicron that has seen rise across much of the world, but has failed to make a large impact in the U.S.

It has not been able to take hold in the U.S. the same way it did in much of Europe, though. 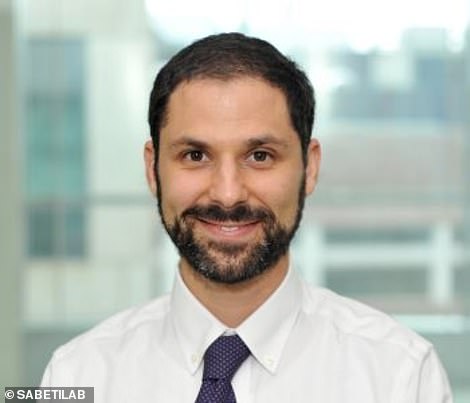 Dr Jacob Lemieux (pictured), a instructor of medicine at Harvard Medical School, does not believe the U.S. will suffer a similar BA.2-fueled Covid surge as many other nations around the world did earlier this month

According to most recent data revealed by the Centers for Disease Control and Prevention (CDC) last week, BA.2 makes up 35 percent of active Covid cases in the U.S., with BA.1 still being dominant.

BA.2’s share of Covid infections in America is growing, though, with the variant only accounting for 23 percent of cases in the week previous.

‘We see almost nothing at all associated with the transition to BA.2 prevalence,’ Lemieux told The Harvard Gazette.

Covid cases have remained steady despite what is happening elsewhere in the world.

America is averaging 31,309 cases per day, matching figures from last week. This is the lowest weekly case average since July 2021, just before the Delta variant surge.

America is also suffering 1,032 deaths per day from the virus, a 13 percent drop over the past seven days. Mortality of the virus has significantly dropped over the past few months due to the more mild nature of the Omicron variant, and the nation’s successful vaccine rollout – nearly 90 percent of adults have received at least one jab. 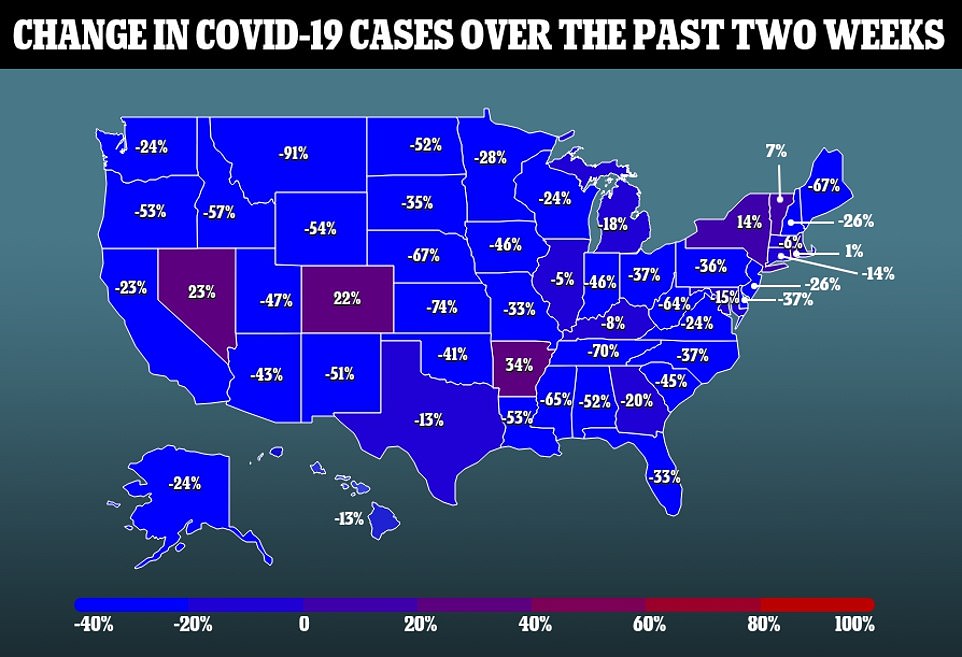 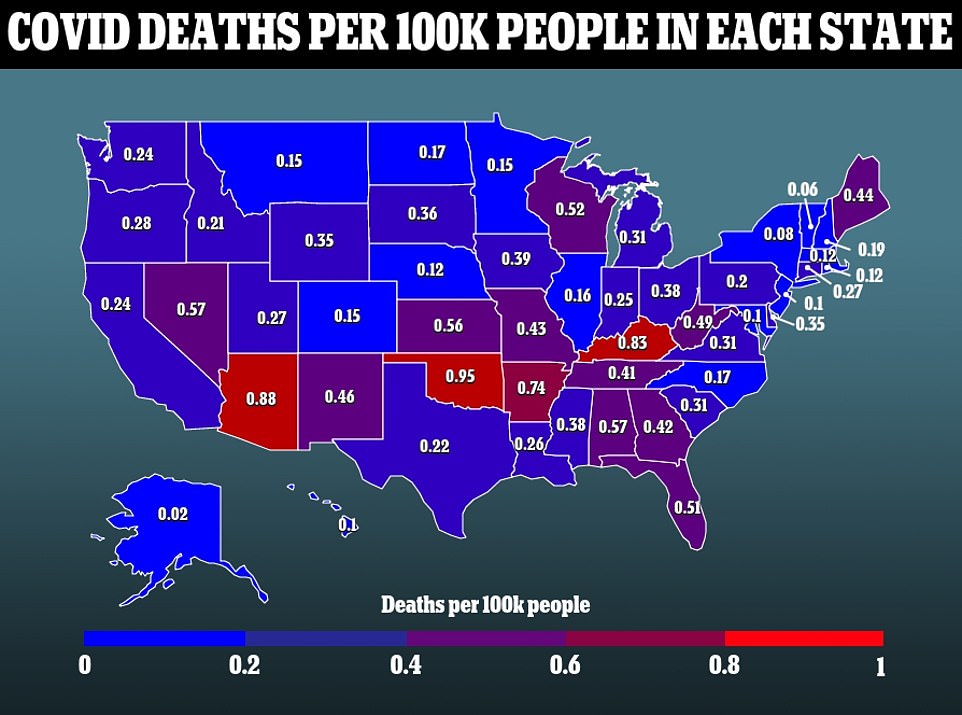 Internationally, the WHO reports that there were over 12 million Covid cases globally last week, a seven percent jump from the previous week.

Deaths dropped, though, down 23 percent to under 33,000 – another sign of the virus’s falling mortality.

Some countries that had experienced declining cases from months, like the UK, France and Denmark, suddenly saw infection rates start to surge last week. Cases seem to have stabilized in these nations as well and the growth has stopped.

Experts at Harvard are hopeful that the U.S. not having suffered a surge so far from BA.2 means that it will likely never come.

With the variant already accounting for more than a third of cases nationwide, they feel it would have impacted national  and local case figures by now.

‘There’s really no indication of an increase in cases or deaths in the region that corresponds to this increase in BA.2 infections that we’re seeing,’ Bronwyn MacInnis, director of pathogen genomic surveillance at Harvard’s Broad Institute, said.

On the west coast, Dr Pavitra Roychoudhury, a bioinformatics expert at the University of Washington, told DailyMail.com that a rise in prevalence of BA.2 in her department’s sequencing has not translated into higher case numbers just yet either. 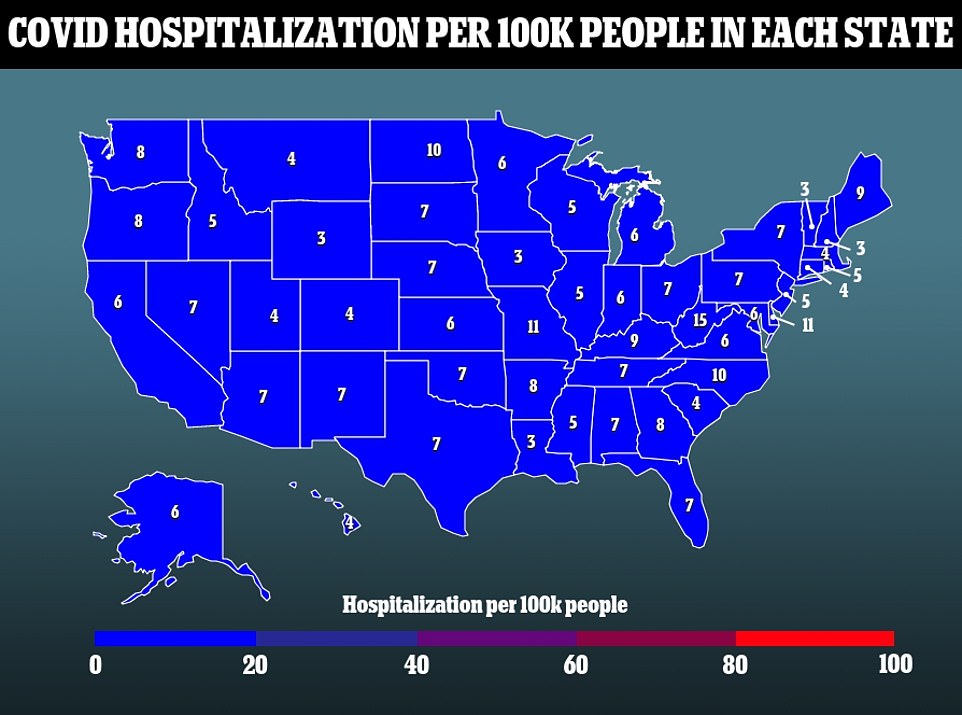 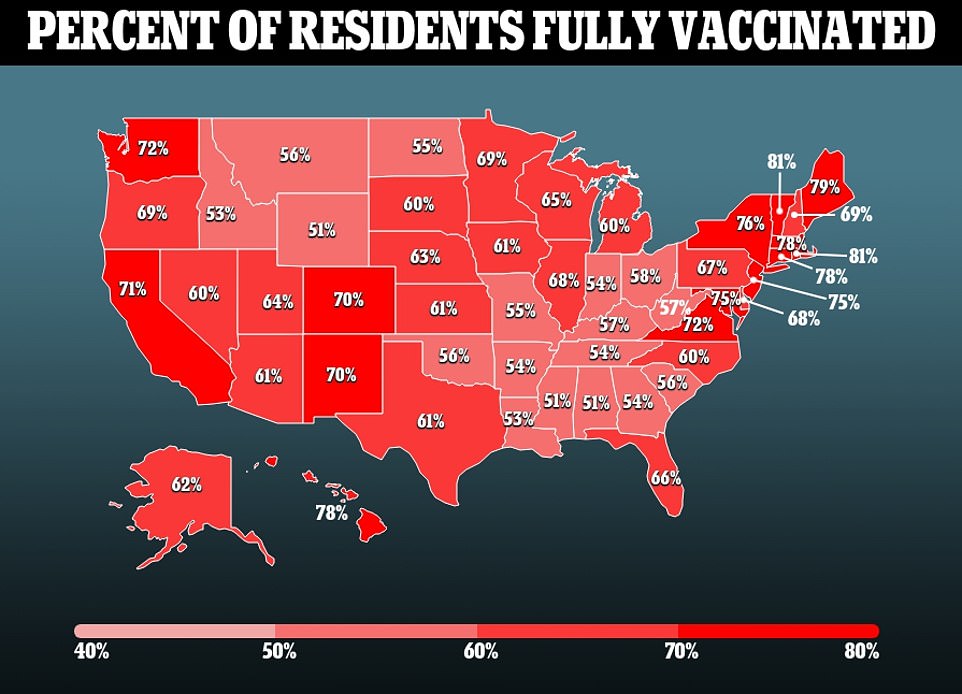 Cases are rising in some places, though, a signal that BA.2 could start impacting daily case figures around the country.

BA.2 is most prevalent in the New York and New Jersey region, according to CDC data, making up 52 percent of cases.

New York, which has served as canary in the coal mine of sorts during the pandemic so far, has recorded a 14 percent increase in Covid infections over the past two weeks, the first state to record a substantial jump in nearly two months.

The state is still at 1,000 cases per day, though, a very small total that pales in comparison to the nearly 40,000 case per day mark reached at the Omicron variant’s peak. 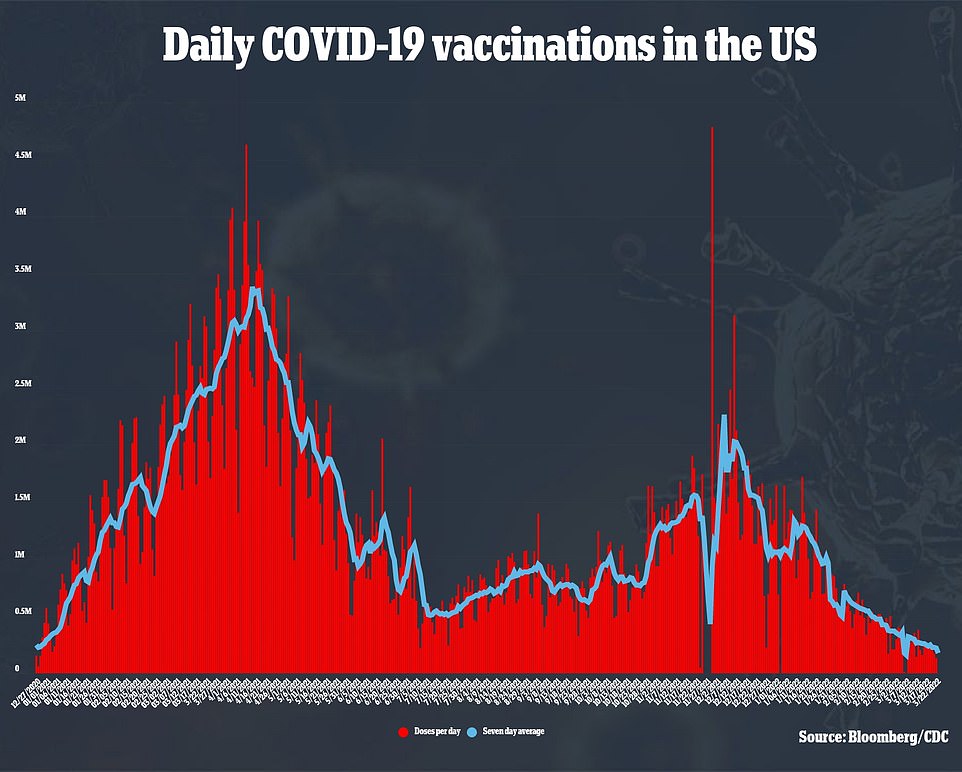 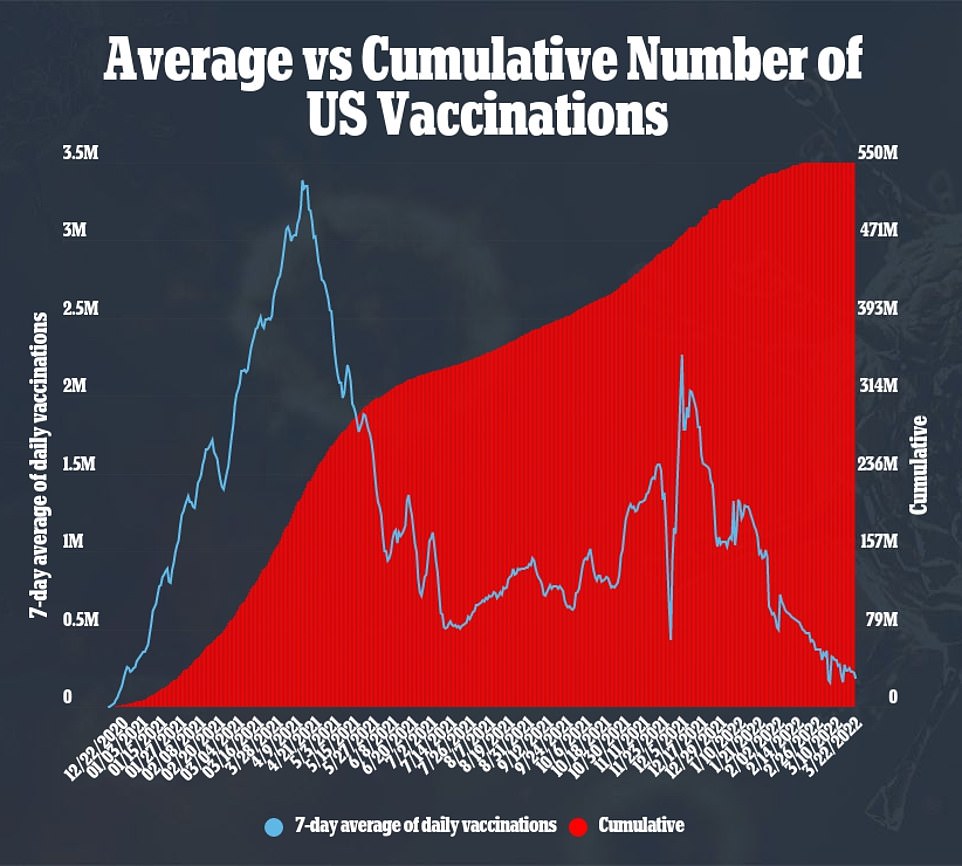