The UK should be proud of its decision to delay the second doses of Covid jabs, says a World Health Organization director who has hailed the ‘brave’ move.

Dr David Nabarro, the WHO’s chief Covid-19 expert, said Britain’s decision has been ‘a great lesson to the rest of the world’.

The gamble was controversial when announced by UK regulators, who over-ruled scientists who said the Oxford and Pfizer Covid vaccine doses should be given no more than three weeks apart because this is what had been done in clinical trials.

But government experts said a single dose of either jab appeared to offer enough protection against Covid that people could wait another nine weeks for their second.

This policy has led to a staggering 12million people getting their first dose of a Covid vaccine in the UK already – more than in any other country in Europe.

Dr Nabarro told Sky News: ‘I think the UK’s approach so far as been vindicated.’

The World Health Organization, however, has still refused to endorse the approach and its advice is still to use the three-week gap. Pfizer also did not give its blessing.

Although 511,000 people have already had a second dose of their vaccine in the UK, the vast majority are being postponed and will start in March, by which time at least the 15million over-70s and most vulnerable will have had a first dose. 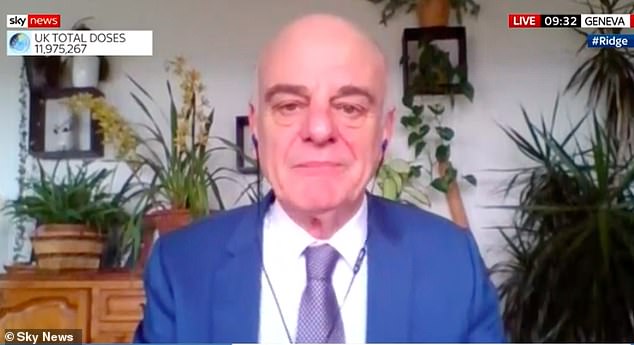 Dr David Nabarro, chief Covid-19 expert at the World Health Organization (pictured), said Britain had taught ‘a great lesson to the rest of the world’ with its pioneering but controversial dosing plan 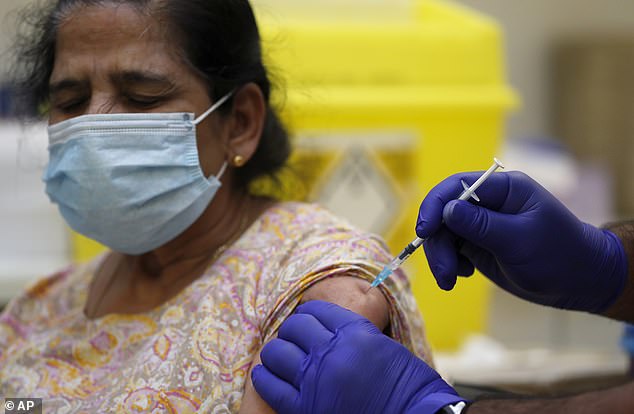 As a result of tripling the length of time between first and second vaccinations, the UK has now got jabs to a staggering 12million people (Pictured: A woman is vaccinated in Ilford, London)

Speaking to Sky’s Sophy Ridge on Sunday, Dr Nabarro said: ‘The advice of the WHO on intervals between vaccine doses was based on what the manufacturers did in what we call the phase three trials of the vaccine.

‘WHO and its committees really has to work on the basis of what manufacturers have told them, but isn’t it wonderful that it has turned out, as a result of the UK’s bravery, frankly, that these extended intervals seem to be associated with greater protection.’

He added: ‘Yes, I think the UK’s approach so far as been vindicated and, yes, it has taught a great lesson for the rest of the world. Thank you, British scientists.’

Government scientists and ministers had been repeatedly forced to justify their decision to tear up the manufacturer instructions on the Covid vaccines.

When the Pfizer/BioNTech and Oxford/AstraZeneca jabs got emergency approval, both came with the recommendation that everyone get the second dose three weeks after the first.

But, in the face of an out-of-control outbreak with the new fast-spreading variant, and a ‘lumpy’ vaccine supply chain, officials extended the window to three months.

Doctors and independent researchers were furious, saying there was no evidence the vaccines worked in this way and it would deprive people of second doses they had been promised. But the UK regulator held its line.

Professor Chris Whitty, chief medical officer for England, said at a Downing Street press conference in January: ‘By extending the gap we are going to, over the next three months, be able to essentially double the number of people who will be vaccinated.

‘So if, by a process of not very difficult mathematics, if over that period there is more than 50 per cent protection then you’ve actually won.

Delaying the second dose of the Pfizer coronavirus vaccine could leave some elderly patients vulnerable to the South African Covid variant, research suggests.

Laboratory tests by Cambridge University found that a single shot of the jab might not stimulate a strong enough immune response to kill the new strain in over-80s.

Antibody levels only appeared to be protective after a second dose — but the researchers admitted the jab is still likely to be ‘less effective’ when dealing with the E484K mutation on the South African variant’s spike protein.

Experts believe the mutation — which is also present in the Brazilian Covid variants — helps the strain ‘hide’ from the body’s natural defences.

The news is particularly worrying as the UK Government has this week warned that cases of the South Africa variant are cropping up in people who haven’t travelled there, and the same E484K mutation is also appearing on unrelated cases caused by the Kent variant and even older versions of the virus.

Top Government advisers and vaccine manufacturers insist the current crop of jabs should still work against the variant – when given in the full two doses – because the antibodies they make can still stop the disease from taking hold in the body.

Antibodies — disease-fighting proteins created by vaccines and in response to previous infection — are also not the immune system’s only layer of defence.

Scientists reacting to the findings said now was ‘a good time to switch’ away from Britain’s one-dose strategy, which aims to get wider vaccine coverage quicker.

Regulators pivoted from their original plan to give people their second dose after 21 days when the Oxford University/AstraZeneca vaccine was approved at the end of December.

They pushed back the second dose for 12 weeks in a bid to give partial protection to as many vulnerable people as possible and drive down hospital admissions. And the strategy has been extremely successful, with 9.6million people now vaccinated with at least a single dose of either Pfizer’s or AstraZeneca’s jab.

No10 has already launched an effort to swab tens of thousands people in areas of England where cases of the South African variant have been discovered in people who haven’t travelled out of the country.

‘More people will, overall, have been protected than would have been otherwise.

‘And our quite strong view is that we think the protection will be quite a lot more than 50 per cent so therefore in net public health terms there will be substantially more protection by going faster.’

He said it was still SAGE and the Government’s view that everybody needs a second dose and said there had been ‘vigorous scientific debate’ about the policy.

Professor Whitty added: ‘Clearly, if we had infinite vaccines we might have taken a different approach but, clearly, we don’t.

‘At this point in time, for the next three to four months, the number of vaccines we have available is going to constrain our ability to get through the 25 to 30million people we must do to get through all of the JCVI areas.’

The reason scientists were angry about the policy was that the three-week dose spacing was the only one trialled by Pfizer and BioNTech in their original studies.

In the trial Covid cases started to fall around 12 days after people got their first dose but, because everyone got a second shot just 10 days later, scientists didn’t know how long immunity from the initial jab would last.

The Oxford/AstraZeneca jab was more flexible, however, having been tried out in a variety of regimens.

When the second dose delay was first announced, the World Health Organization refused to give its blessing — a position it has not yet changed.

The WHO said in January that governments should be giving people their second dose within 21 to 28 days of having the first, to make sure the vaccine works long-term.

But it did not attack Britain’s decision not to do this, admitting the Government had been forced to make a difficult decision because of spiralling infections and deaths in recent weeks.

One of the experts said they ‘totally acknowledge that countries may see needs to be even more flexible in terms of the administration of the second dose’.

In a meeting to discuss how doses are spaced out, WHO experts concluded that, with the Pfizer/BioNTech jab, people should get their second dose 21 to 28 days after the first, with an ‘outer limit’ of six weeks.

This maximum limit is still only half as long as the UK plans to leave it, with hundreds of thousands of people being told they could have to wait three months.

Stockpiles are not big enough for the NHS to proceed with its plan of two doses within a month for every patient, so they’re being stretched to go further until more vaccines are delivered in the spring.

The decision was made by the government’s Joint Committee on Vaccination and Immunisation (JCVI) and endorsed by all of the UK’s chief medical officers.

Dr Alejandro Cravioto, chairman of WHO’s vaccination advisory group, said yesterday: ‘We deliberated and came out with the following recommendation: two doses of this vaccine within 21-28 days.’

His colleague Dr Kate O’Brien said the data being used to justify the 12-week regime being used in the UK was ‘imperfect’.

This meant the WHO was not comfortable officially giving it the seal of approval.

Dr O’Brien said: ‘I think we have to emphasise the need for additional evidence.’ 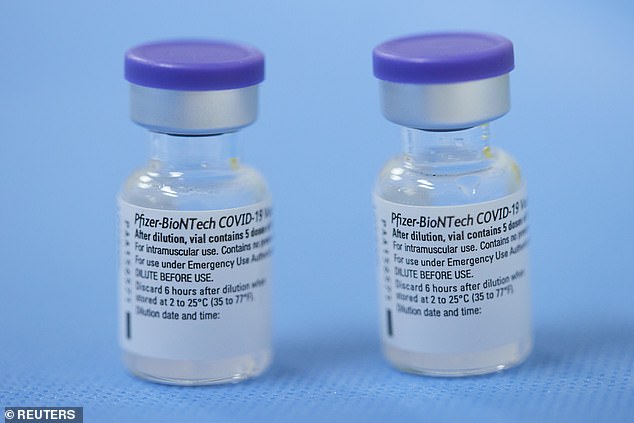 Just a week earlier Pfizer had hit out at the plan itself, saying there was no evidence it would work.

The company said there was ‘no data’ in its studies to show its vaccine protects against Covid when taken 12 weeks apart.

In a thinly-veiled swipe at the UK, the US firm warned that any ‘alternative’ dosing regimens should be closely monitored by health authorities.

‘Data from the phase three study demonstrated that, although partial protection from the vaccine appears to begin as early as 12 days after the first dose, two doses of the vaccine are required to provide the maximum protection against the disease, a vaccine efficacy of 95 per cent,’ Pfizer said in a statement.

‘There are no data to demonstrate that protection after the first dose is sustained after 21 days.’